All The Big Winners From UFC Fight Night: Munhoz vs Edgar
By Thomas Gerbasi, on Twitter: @TGerbasi • Aug. 22, 2020

Former lightweight champion Frankie Edgar makes his long-awaited debut at bantamweight, where he'll be welcomed by Pedro Munhoz to the 135 pound ranks in the main event of Saturday's UFC Fight Night, live from the UFC Apex in Las Vegas, NV.

Late notice replacement Trevin Jones scored an upset in the opener, as he stopped highly touted Timur Valiev in the second round of this clash of UFC newcomers contested at a catchweight of 140 pounds.

Valiev (16-3) went on the attack with a variety of punches, kicks and elbows, not allowing Jones (13-6) to get on track, and it looked like he might close the show after a right kick to the body dropped Jones. Valiev hesitated, expecting a stoppage, but Guam’s Jones rose to his feet, weathered the ensuing storm and even scored a takedown in the final 30 seconds.

The Dagestan native kept the pressure on in the second, looking to finish what he started in the first round, but a crisp right-hand counter by Jones drilled Valiev and put him on the deck. After a follow-up barrage, referee Chris Tognoni had seen enough, stopping the bout at 1:59 of round two. 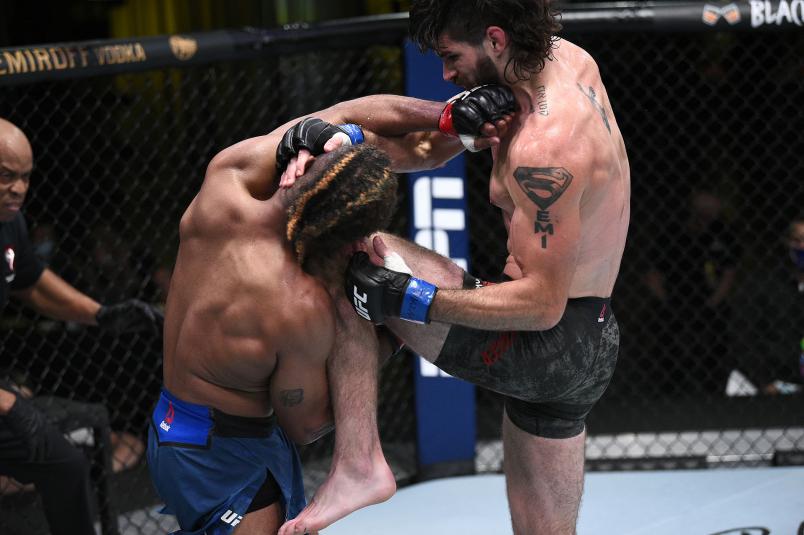 Semelsberger knees Carlton Minus in their welterweight fight during the UFC Fight Night event at UFC APEX on August 22, 2020 in Las Vegas, Nevada. (Photo by Chris Unger/Zuffa LLC)

In a meeting of debuting welterweights, Matthew Semelsberger scored a three-round unanimous decision over Carlton Minus.

The first round was competitive, each fighter having his moments, but the harder shots were landed by Semelsberger, allowing him to edge out the frame.

Just before the midway point of the second round, Semelsberger’s power edge paid off as he knocked Minus down. Semelsberger proceeded to take his foe’s back, but Alaska’s Minus defended well, got back to his feet and landed some shots before making it to the end of the round.

Semelsberger remained a step ahead in the third, even throwing in a takedown, and while Minus was never out of the fight, the decision for Maryland’s “Semi the Jedi” was no shocker.

UFC debutant Jordan Wright made the most of his short-notice opportunity to fight in the big show, as he replaced Jorge Gonzalez and halted Ike Villanueva in the first round of their light heavyweight bout.

Wright opened the fight with a spinning kick to the head that caught Villanueva’s head and dropped him. Upon standing, Villanueva got caught in the clinch, where Wright opened up a nasty cut right above his eye with a hard knee. Villanueva did his best to get back in the fight, but referee Jason Herzog wanted the Octagonside physician to check it out, and the doctor had seen enough, with the official time of the stoppage at 1:31 of the first round. 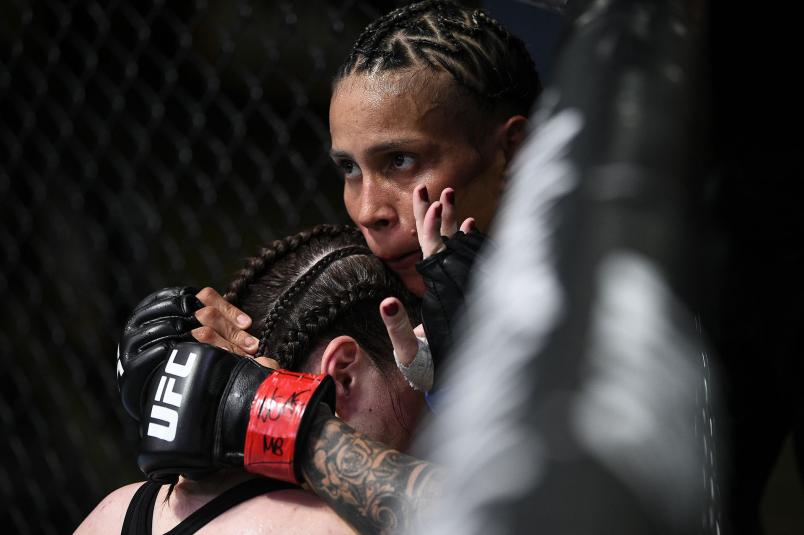 Brazil’s Amanda Lemos earned a big win in strawweight action, as she won a shutout three-round decision over Japan’s Mizuki.

Mizuki controlled the action for much of the first round, but in the final two minutes, Lemos left an impression with some hard flurries, a knockdown and a throw that put the frame in her favor.

The second and third were still largely controlled in the clinch by Mizuki, but when Lemos erupted, her explosive bursts made an impression, so much so that she earned the win via identical scores of 30-27 across the board.

Expected to face different opponents Friday morning, welterweights Daniel Rodriguez and Dwight Grant wound up in the Octagon together, and after a wild couple minutes, it was Rodriguez picking up his third win of the year via first-round knockout.

A left-right by Grant put Rodriguez down in the opening minute of the fight and he nearly got stopped after a barrage of unanswered blows, but Rodriguez survived, got back to his feet and proceeded to knock Grant down with a left hand. Rodriguez went on the attack, and then a second knockdown of Grant followed. This time, the follow-up barrage was enough for referee Chris Tognoni to step in and stop the bout, with the official time of the finish 2:24 of round one.

As the biggest underdog on Saturday’s card, Shana Dobson entered her bout against hot prospect Mariya Agapova with something to prove, and she did just that, halting her foe in the second round of their flyweight matchup

Agapova blitzed Dobson at the start of the bout and landed a couple shots before Dobson took her down. Agapova’s energy level didn’t dip in the slightest on the mat and she quickly got to her feet in order to pick up her own takedown. Dobson got loose and rose, and the frenetic action continued, Dobson scoring her second takedown with a little over three minutes left. Agapova reversed position and took Dobson’s back in the final 90 seconds, but “Danger” was able to get out of trouble and make it to the end of the round.

The fight went to the mat early in round two, Agapova in the top position. Dobson smoothly reversed position and went on the attack, and after a barrage of unanswered strikes, referee Mark Smith stepped in and stopped the fight at 1:38 of the second stanza.

Contender Series graduate Joe Solecki made it two for two in the Octagon, as he submitted Austin Hubbard in the first round of their lightweight bout.

Hubbard looked like he was going to have success at range as the bout began, but once Solecki got within grappling range, it was the North Carolina product’s fight. He took Hubbard’s back while the two were standing, locked in a body triangle, and then the rear naked choke followed, forcing Hubbard to tap out at the 3:51 mark of round one.

With his back against the wall after a 1-2, 1 NC start to his UFC career, New England’s Mike Rodriguez came up big against Poland’s Marcin Prachnio, knocking his opponent out in the first round of their light heavyweight co-main event.

Rodriguez took his time getting acclimated to the bout, but once he locked Prachnio up in the clinch, it was game on, and after scoring on his foe with knees, he unleashed a left elbow to the head that stunned Prachnio. The Warsaw product fell to the canvas, and after two more strikes on the ground, referee Jason Herzog stopped the fight at the 2:17 mark.

The legend of Frankie Edgar grew in Las Vegas on Saturday, as the former lightweight champion and featherweight title challenger picked up an important victory in his bantamweight debut, taking a close split decision over 135-pound contender Pedro Munhoz.

In the early going, Munhoz went after Edgar’s legs with his kicks, but every kick was met with rapid-fire combinations from “The Answer” who subsequently took a few hard right hands without issue while answering with sharp counters. But Munhoz kept pressing, landing crisp jabs down the stretch in a fast-paced round.

Edgar stayed busy in the second stanza, cutting Munoz over the left eye in the process while threatening takedowns. Munhoz’ forward motion was consistent, but he was eating shots on the way in. With three minutes left, Edgar scored his first takedown, and though Munhoz rose quickly, Edgar was still doing the most efficient work.

Dealing with a cut around his own eye in round three, it was clear that Munhoz was making mark with his heavy hands, but Edgar’s stick and move attack was unaltered, and when he threw, he was doing it with both hands, so if he missed the first two, the third would land. Munhoz’ leg kicks were making an impression, though, and Edgar was feeling them.

Edgar scored a quick takedown to start the fourth round, Munhoz scrambling right back to his feet. The combinations kept coming from the former lightweight champion, but Munhoz’s varied striking attack was giving Edgar plenty to think about.

Showing a sense of urgency in the final round, Edgar did some of his best work of the fight as he tagged his foe at range and in the midst of heated exchanges. Munhoz was an immovable force, though, as he gave as good as got, wrapping up a main event that was worth waiting for.