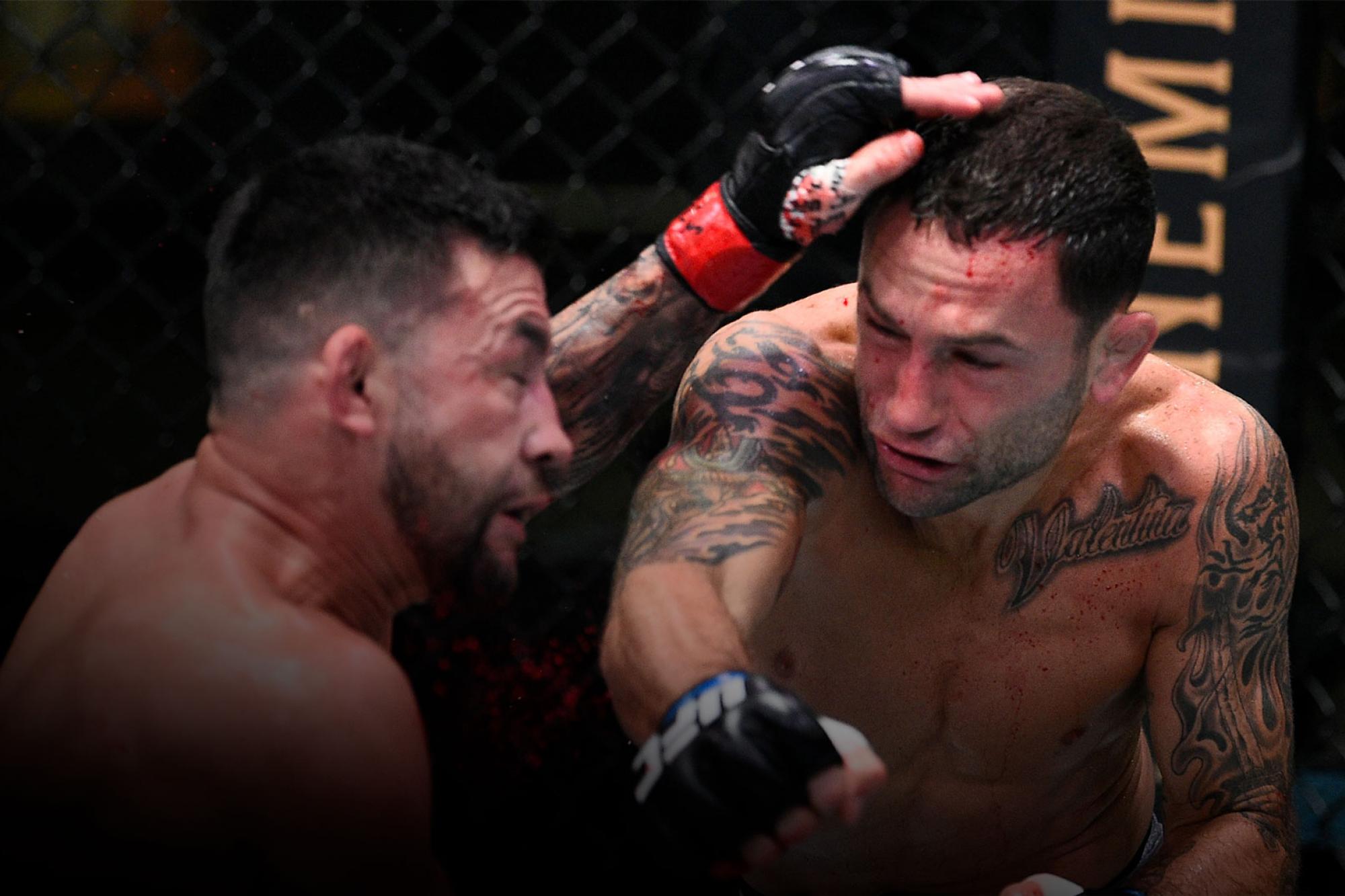 Recap the bonus winners from UFC Vegas 7: Edgar vs Munhoz
By Zac Pacleb, on Twitter: @ZacPacleb • Aug. 23, 2020
Fight of the Night
Edgar vs Munhoz

The eternal Frankie Edgar answered any doubts about what he has left, and Pedro Munhoz reasserted his worthiness at the top of the bantamweight division in a back-and-forth, five-round battle that two of three judges ruled in Frankie Edgar’s favor.

Munhoz attacked Edgar’s legs with low kicks early, and Edgar’s counter was to bite down on his mouthpiece and throw swift combinations over the top. The Brazilian landed multiple hard right hands, but Edgar continued throwing and landing counter shots of his own. As has become  his custom, Munhoz never let off the gas pedal, pressuring forward and firing heavy shots that Edgar continued to eat and return.

Edgar found more of a rhythm in the second, cutting Munhoz over his left eye while mixing in his wrestling. That didn’t slow Munhoz down, but Edgar started to connect a little more as Munhoz moved forward. Eventually, Edgar secured a takedown, but the fight returned to the feet rather quickly.

The third round saw Munhoz connecting with heavier and heavier shots, but Edgar’s chin held up, and his counter-heavy attack continued to score points as he moved around the Octagon. Munhoz did his best to slow Edgar’s movement, though, persisting with heavy kicks to Edgar’s lead leg, and as the fight moved to the fourth round, it was clear those shots were having an impact on “The Answer.”

The former lightweight champ shot and scored for a takedown to open the fourth round, but Munhoz scrambled to his feet quickly. The fourth frame looked a lot like the previous three, with Munhoz pressing forward and connecting with heavy right hands and low kicks while Edgar pieced together combinations and relied on movement. Edgar started to bear down a little more in the fifth round, showing his experience in these types of battles as he began sitting down on more of his punches, often landing the last shot after tense exchanges. Munhoz never stopped walking Edgar down though, and it seemed like neither fighter gained a real upper-hand in the bout.

In the end, the scorecards were split, with Edgar earning the nod, proving himself as yet another contender in the ever-loaded bantamweight division. Munhoz has nothing to hang his head about, though, as he showed he has the real skill and heart to compete with the best of the division.

The biggest underdog on the card, Shana Dobson walked into the Octagon with a lot to prove against the much-hyped Mariya Agapova, and she did just that by way of a second-round stoppage.

Agapova rushed Dobson right off the bat, setting a hellacious pace with a barrage of straight punches and high kicks. Dobson tried to slow the attack with a takedown, and while she was successful, Agapova got back to her feet and continued her blitz. Dobson soon scored her second takedown midway through the first frame, but Agapova reversed positions and took Dobson’s back. “Danger” fought off her submission attempts to end the round.

Dobson weathered yet another furious attack to start the second round as the fight returned to the ground with Agapova in top position. Eventually, though, Dobson reversed position and unleashed heavy ground-and-pound shots on the gassed Agapova until the referee stopped the bout a little more than 90 seconds into the second round.

Stepping in on late-notice, Trevin Jones scored a stunning upset in the night’s opening bout, stopping the highly-touted Timur Valiev in the second round after enduring major adversity in the first five minutes of the fight.

Valiev showed off what makes him such a hot prospect with his diverse striking attack, landing a staunch front kick to Jones’ body that dropped him. Jones weathered that storm, though, even scoring a takedown before the end of the round. Valiev kept the pressure high in the second round, but Jones found his window and countered Valiev’s incoming kick with a stiff right hook that dropped the Dagestan native. Jones pounced on him, and after some ground-and-pound, he earned the stoppage win midway through the second round.