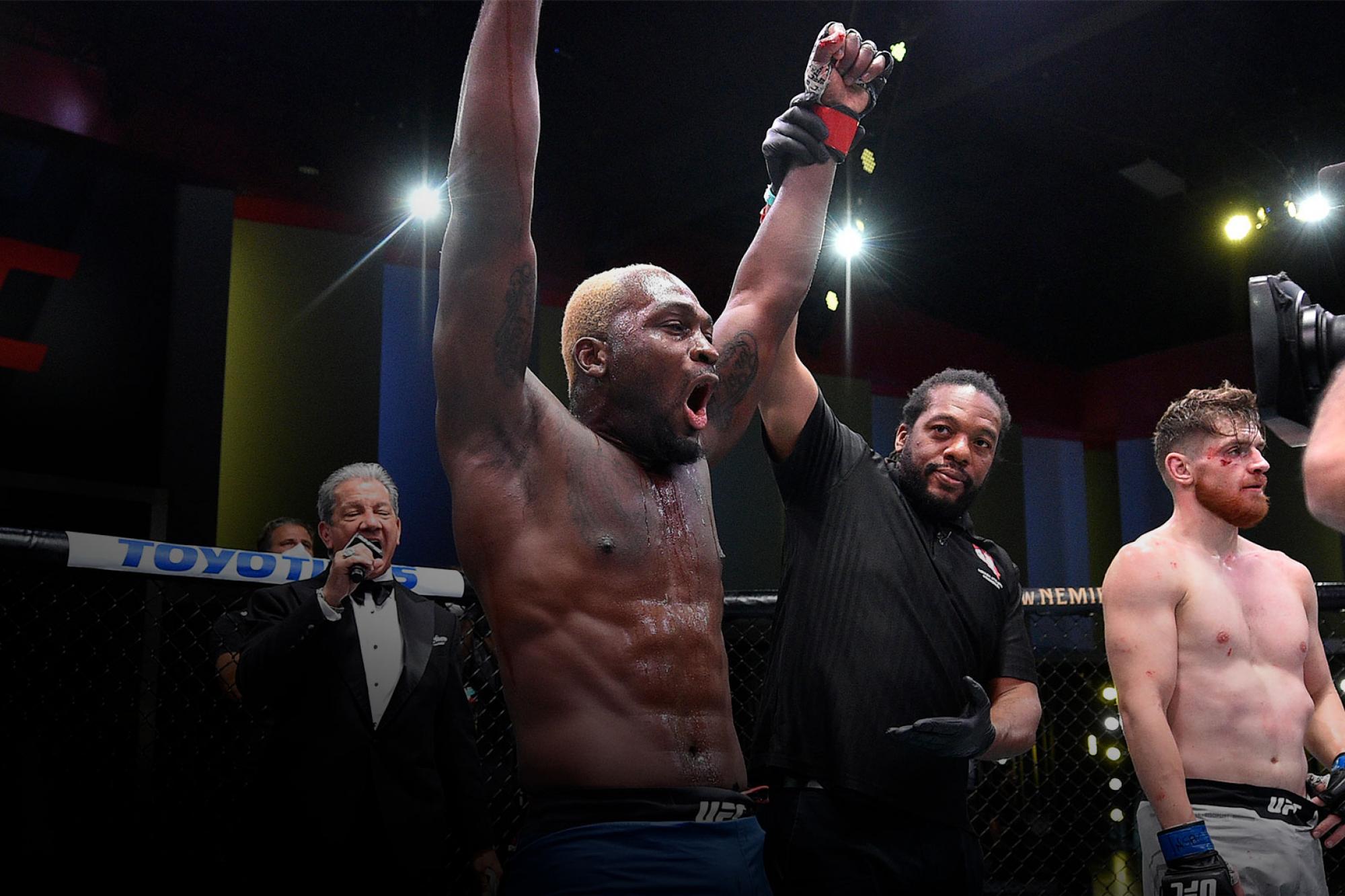 Saturday’s UFC Vegas 5 event is in the books, and now that the dust has settled in “The Fight Capital of the World,” it’s time to go to the scorecard to see who the big winners were at the Apex.

There’s probably nothing more intoxicating in combat sports than the young, unbeaten phenom. But equally enthralling is the grizzled veteran who steps up and puts a “1” in that phenom’s loss column when no one expects him to. And while I wouldn’t exactly call Derek Brunson “grizzled,” he is a veteran of the highest order, and he showed all the tricks that come along with that experience when he handed Edmen Shahbazyan his first pro loss on Saturday. It was a master class from the North Carolina native, and he was just the better man on the night, which means you can’t dismiss the upside of Shahbazyan. This is the fight game. But it does give him some things to work on for his return while Brunson reignites his push for a world title shot.

Jennifer Maia picked the perfect time to score the biggest win of her UFC career, and she’s seemingly earned a title shot for her submission of Joanne Calderwood. It was the high point of a two-year stint in the UFC filled with ups, downs, wins, losses and battles with the scale. But now the ball is in the court of the Curitiba native, who now has a clean slate heading into a showdown with Valentina Shevchenko. As for Calderwood, all the props in the world go to the Scotland native for risking her title shot in order to stay sharp against a dangerous foe. That’s real fighter stuff.

I’ve been on the Vicente Luque bandwagon for a loooooonnnggg time, and finally, that bandwagon is becoming standing room only. That’s a well-deserved turn of events for not just one of the most exciting welterweights in the world, but a true gentleman. Like his friend and teammate Gilbert Burns, Luque has made his place in his game with his fighting ability and willingness to take on all comers. He proved it again on Saturday with a Performance of the Night finish of tough New Yorker Randy Brown. It’s an old school approach, but it’s starting to pay dividends.

Want the key stat from Bobby Green’s win over Lando Vannata? Not that he won his second Fight of the Night bonus or third post-fight performance award, but that with the victory, he’s on his first winning streak since 2014. For a fighter as talented as Green, that’s hard to believe, but it’s true. It’s also a sign that the Californian may finally be hitting his stride and putting all his focus on the fight game. That hasn’t been easy for him over the years given some of the things surrounding him outside the Octagon, but with his life seemingly in a good place, he’s got the tools to make a run at the elite at 155 pounds, and beating Vannata was a solid start.

The quiet man strikes again. Never one to spend more time doing interviews than honing his craft in the gym, Jonathan Martinez proved that to be a wise strategy once more as he scored an impressive third round finish of Frankie Saenz. Sure, Martinez missed weight for the bout, but if he gets that part of his game under control, the sky’s the limit for the “Dragon,” whose pinpoint accurate strikes and variety of attacks made Saenz’ night miserable.