Kanako Murata has been on the mats since she was a toddler, first in judo and then in wrestling. She won gold at the Junior World Championships in 2011 and had the Olympics in her sights. She competed in MMA in both Rizin and Invicta FC. In the latter, she’d become the strawweight champion. She only experienced defeat once in thirteen professional MMA bouts, and that was more than five years ago. Then she won her UFC debut in late 2020 over established veteran Randa Markos.

“I felt that I was able to execute my game plan well in that fight, but I also felt like I could have been more aggressive in certain areas. Either way, it was good to get the win in my first UFC fight against a great fighter. I felt that in the UFC you have to be good at every aspect of the fight game. I have been working on raising all levels of my fight game since.”

At age 27, there’s already so much to take pride in. But Murata’s secret for continuing to her continued ascent is simple: never be satisfied and never stop learning.

She’ll need all the extra moves she can learn between now and Saturday when she meets Virna Jandiroba on the prelims of UFC Fight Night: The Korean Zombie vs. Ige. As adept at jiu-jitsu as Murata is at wrestling, Jandiroba also boasts former Invicta champion status.

“I think she is a very tough opponent,” Murata agrees of Jandiroba. “But that’s what the UFC is about. You throw a rock and it lands on a tough fighter. There’s no way around fighting tough fighters. I am at the lowest place in the division and all I need to do is start climbing.”

It could still prove to be a quicker-than-average climb. A good win over the Brazilian could land her in the strawweight division’s Top 15 and the next echelon of steep competition. 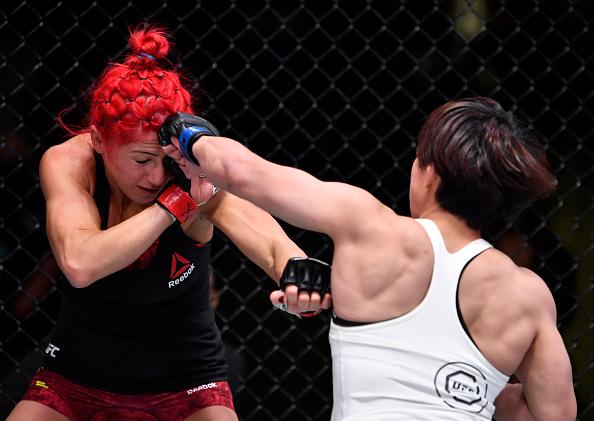 Kanako Murata of Japan punches Randa Markos of Iraq in a strawweight fight during the UFC Fight Night event at UFC APEX on November 14, 2020 in Las Vegas, Nevada. (Photo by Jeff Bottari/Zuffa LLC)

“I don’t know about that because I haven’t fought yet,” she says, noting that her sole focus in on Saturday. “I am not the type who can juggle too many things in my head. One by one, step by step is my way.”

He told me to wear a mask for the walkout because it will shut out all that’s going on around you and let you focus on the fight. So I walked out with a mask after that.”

Unable to wear one for her UFC debut, she was able to focus in a different way, albeit involuntarily, thanks to the UFC APEX. There is little in the way of distractions as the fighters make their walk to the Octagon, and during the last year of the pandemic, the venue has served as an alternative to the capacity crowds that are slowly making their way back as more states and countries reopen. 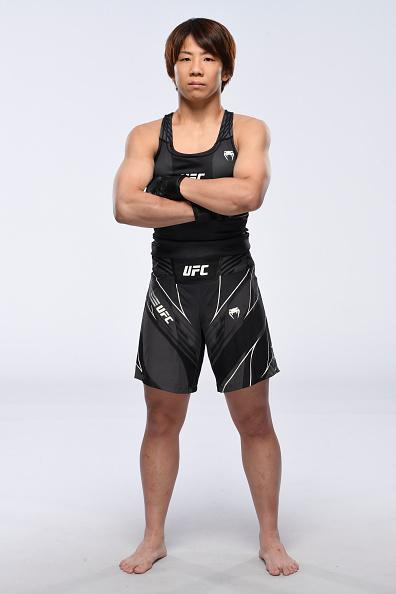 Kanako Murata poses for a portrait during a UFC photo session on June 16, 2021 in Las Vegas, Nevada. (Photo by Mike Roach/Zuffa LLC)

“I really didn’t notice the difference because I was very focused on the fight,” she says. “I honestly don’t really care because with fans or not, there is only one thing I need to do when I step in the cage. My coaches would probably prefer no audience because it would be easier to give advice during the fight.”

Easier for the coaches, perhaps, and with the grappling chess match all but certain to unfold, probably easier for the fighter, too. But the high-level wrestling clinics Murata is capable of putting on deserve to be seen by a live audience. May it be soon.