Flyweight Returns From Injury And Is Looking To Make A Run
By Zac Pacleb, on Twitter: @ZacPacleb • Mar. 11, 2021

JJ Aldrich felt angry walking to the back of T-Mobile Arena after her split decision loss to Sabina Mazo at UFC 246. She felt like she’d done enough to earn the nod on the scorecards, but the judges saw differently, handing Aldrich her second loss in three fights. Moreover, she found out she broke her hand in the fight, which meant months of recovery and rehab were in order, and that also meant a lot of time to reevaluate her most recent performance.

“If I want to be a champ in this weight division, it shouldn’t be that close of a fight, in my opinion,” Aldrich told UFC.com. “It took me a little bit to figure that out after the loss. I really had to go back and figure out some stuff and change some things up and really be honest with myself as far as that. It was really hard, not only taking a loss, but then being injured, so I couldn’t get back in there, but I think it was a blessing in disguise.”

The healing process took a little longer than she wanted and expected. Soon enough, she was back in training and back in camp, things she perhaps took for granted before and regained fondness for while nursing her hand.

MORE UFC VEGAS 21: Fighters On The Rise | Fight By Fight Preview | For Charles Jourdain, It's Never Over | Significant Stats

“I’ve enjoyed training again,” she said. “It’s something that sometimes you don’t realize you miss until you can’t do it, and then it’s like, ‘Oh, man. I need to get that back.’”

Once she got back to training, Aldrich said everything “worked out” in her favor, and she didn’t really struggle with her hand at all. 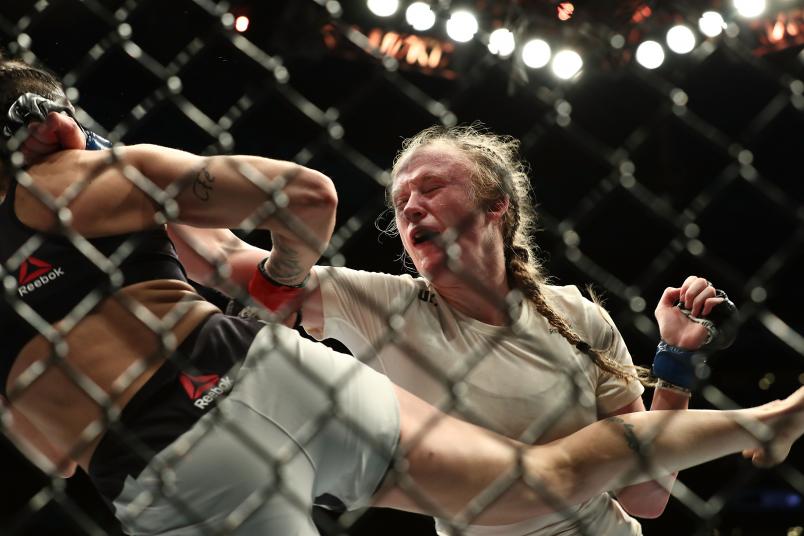 JJ Aldrich punches Polyana Viana in the third round of their straw weight bout during UFC 227 at Staples Center on August 4, 2018 in Los Angeles, United States. (Photo by Joe Scarnici/Getty Images)

With that behind her, she can look at what and who is ahead, which in this case is UFC veteran Cortney Casey. Aldrich has had Casey in her sights for some time, and now that she is in her sights, Aldrich predicts an entertaining and tough bout with the woman known as “Cast Iron.”

“We both like to swing and hit hard and just entertain the fans, so I’m really excited about that,” she said. “I’m also really excited because they had offered me that fight last summer, and my hand was still in a cast, so I had to turn it down. I was already in kind of a depressed state at the time, so also losing out on an opportunity got to me a little bit. Being able to get that back, I feel like, even after a year off, I’m right back to where I could’ve been.”

Where Aldrich wants to be is in the mix at the top of the flyweight division. Coming off a loss, the first order of business is taking care of Casey, and Aldrich is hoping the lessons learned in her split decision loss to Mazo manifest in her upcoming fight.

“I really want to be able to go out there and just be free and throw anything I want,” Aldrich said. “I feel like, in the past, I’ve restricted myself to, ‘I gotta go out there and do this,’ or, ‘I want to do this.’ Last time, I was really looking for a knockout, and that didn’t happen, so I think this fight, I really just want to be able to go there, be me, be free, do whatever I want in there.” 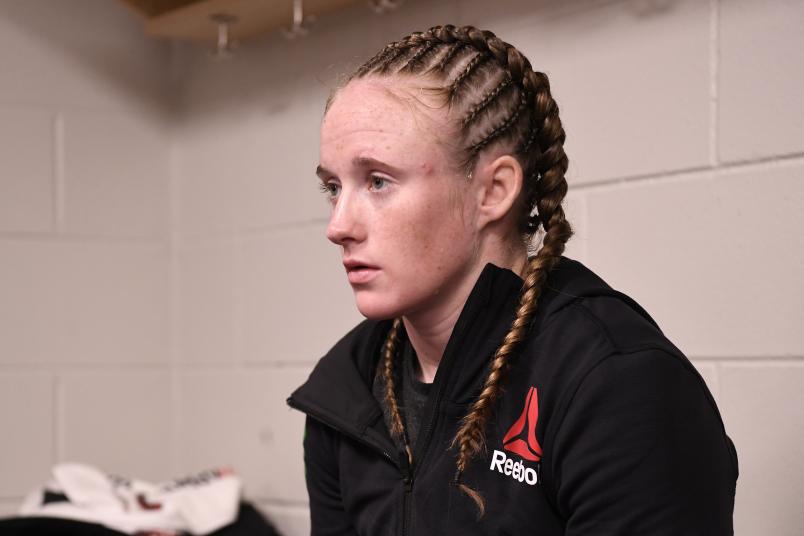 Aldrich, a taekwondo black belt, certainly has the skill set to blend entertainment with effectiveness, so finding her footing in the division should come sooner or later. Training with the surging Elevation Fight Team certainly helps, and she mentioned that they’ve given her the heads up with how fight weeks go these days during the COVID-19 pandemic.

In general, though, Aldrich doesn’t seem all too thrown off by anything. She is excited to get her run up the divisional ladder going again, and she is anticipating her next performance to be her most singular representation of who she is as a mixed martial artist.

“If I just go out there and do what I know I can do, I feel like that’ll say enough about me,” Aldrich said. “I definitely think the flyweight division is the division to be in. It’s a hot division right now. It’s still so new and growing. People are moving down from ’35. People are moving up from ’15. It’s the sweet spot right now.”