See which fighters earned a bonus on UFC Fight Night: Hermansson vs Vettori
By Gavin Porter, on Twitter @PorterUFCNews • Nov. 30, 2020

The fighters of UFC Vegas 16 showed out in a big way in the UFC Apex, with seven of the ten fights coming to an end by knockout or submission. The standout performances made it tough to snag one of the Performance of the Night bonuses handed out by UFC President Dana White. 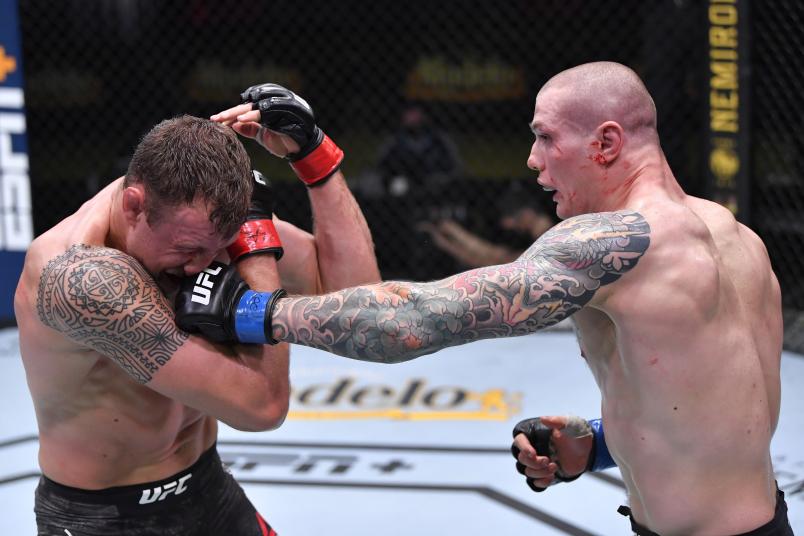 Marvin Vettori of Italy punches Jack Hermansson of Sweden in a middleweight bout during the UFC Fight Night event at UFC APEX on December 05, 2020 in Las Vegas, Nevada. (Photo by Chris Unger/Zuffa LLC)

Late last week Jack Hermansson found out his UFC Vegas 16 main event was in jeopardy, after Kevin Holland tested positive for COVID-19. He didn’t hesitate to accept a short-notice replacement in Marvin Vettori, who was sceheduled to fight at UFC 256 on December 12.

The result was an absolute banger of a main event as both Hermansson and Vettori battled for five great rounds. In the end, it was “The Italian Dream” who left the UFC APEX with the biggest win of his career.

Vettori made history in multiple ways in the bout, becoming the first Italian-born fighter to headline a UFC event. He and Hermansson also set the record for the most ever significant strikes in a UFC middleweight bout with 286 (the old record belonged to Robert Whittaker and Yoel Romero at UFC 255, with 239).

Vettori started off hot, getting a big knockdown and following it up with ground pressure and control in the first round. He continued pressuring Hermansson in the second, using his strength to win the grappling exchanges with the Swede.

But “The Joker” was never out of it for a moment. He answered Vettori’s call, time and time again, making sure to pepper Vettori with combinations every chance he had.

As the fight went on into the championship rounds it became clear that the Vettori just couldn’t be denied. He stepped up in his first main event and in his first fight with a true middleweight contender.

Performance of the Night: Gabriel Benitez

It became clear how much a win meant to Gabriel Benitez while he waited to have his hand raised. The UFC veteran teared up as Bruce Buffer announced his first round TKO win over Justin Jaynes.

And for good reason.

After dropping his last two contests, “Moggly” needed a win. He needed to get back to his game and he needed to see his hard work validated. He did that by waiting for Jaynes to come in with a big, powerful strike and then launching a violent knee to Jaynes’ mid-section. The shot sent Jaynes crumbling to the canvas. Benitez smothered him with a barrage of punches, forcing the referee to call a stop to the contest.

“I just try to do my job and just work hard. I try to give people what they want to see, they want to see a show, and that’s the kind of fighter that I want to be. I want to fight again soon and I’m ready.” – Benitez told UFC.com.

Performance of the Night: Jordan Leavitt

Talk about making a splash in your UFC debut.

Jordan Leavitt lifted Matt Wiman off the ground in the early moments of their lightweight showdown and then slammed him to the canvas. That’s all that would be required of Leavitt for the evening as Wiman was rendered unconscious after he came crashing to the floor.

Leavitt stood up and immediately started celebrating, doing the splits and flying around the Octagon with the help of his corner. And for good reason. His slam-KO was just the 12th of its kind in UFC history.

What a debut and what a show.

“It’s crazy! I’ve never removed anybody from their consciousness before in a fight, that’s my first time. Honestly it’s a little bit anticlimactic. I’ve been waiting for this for ten years and then it’s over very quickly, but definitely really happy. I hope I get that bonus. I’m ecstatic!” – Leavitt told UFC.com