See which athletes impressed us most at UFC Fight Night: Felder vs Dos Anjos.
By Thomas Gerbasi, on Twitter: @TGerbasi • Nov. 16, 2020

Saturday’s UFC Vegas 14 event is in the books, and now that the dust has settled in the “Fight Capital of the World,” it’s time to go to the scorecard to see who the big winners were at the UFC Apex.

There aren’t too many second acts in professional sports, especially in prizefighting, where more often than not, 36-year-olds dropping to a lower weight class is a last-ditch effort to make a final run at glory. Then there’s Rafael Dos Anjos, who has the final run at glory part right, but who seems far away from the fighting finish line after an impressive win over Paul Felder last weekend. Then again, this shouldn’t be a surprise, as RDA has always been a pro who has taken care of himself in and out of the Octagon, and with his victory in Saturday’s Fight of the Night, he is once again a player in the division he once ruled. Could he get that belt back? It’s going to be interesting to find out.

Two UFC fights, two wins. Two knockouts. A combined 57 seconds. Those are some scary stats for Mr. Khaos Williams, who has made quite an impression since he UFC debut earlier this year. And it’s not like he’s knocking out easy marks, either. Alex Morono and Abdul Razak Alhassan are both legitimate UFC welterweights and neither of them made it out of the opening minute with “The OxFighter,” who has become the prospect to watch in the Octagon moving forward. And while I never got to talk with the late, great Emanuel Steward about MMA, I get the impression that the Hall of Famer trainer would have appreciated the way Williams is representing the Motor City of Detroit. 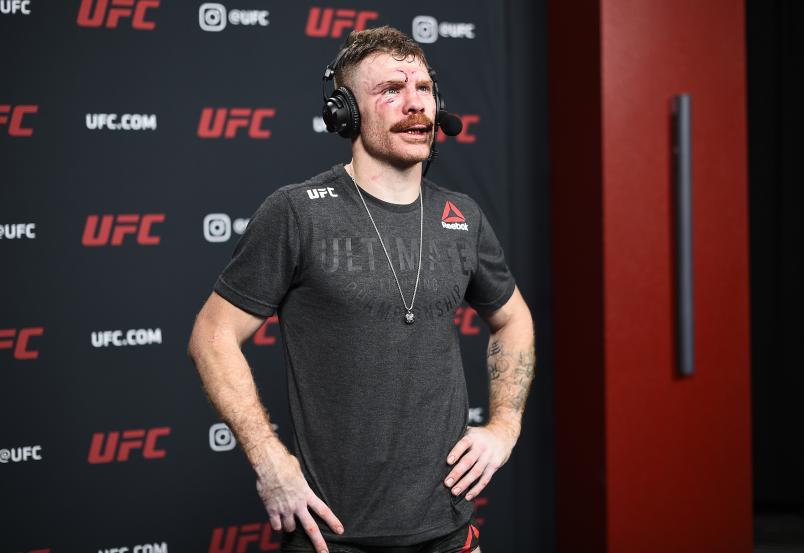 Paul Felder is interviewed after his split-decision loss to Rafael Dos Anjos of Brazil during the UFC Fight Night event at UFC APEX on November 14, 2020 in Las Vegas, Nevada. (Photo by Chris Unger/Zuffa LLC)

What do you say about Paul Felder that hasn’t already been said in the days since he took a short notice main event against Rafael Dos Anjos and then went five hard rounds with the former champ en route to a Fight of the Night bonus? I’ll just add my .02 and say that in and out of the Octagon, Felder is one of the sport’s good guys, someone we should all enjoy while he’s here as an active fighter, because win or lose, he is the type of ambassador for the sport – for all sports, for that matter – that need. There’s no BS, no flashy lights, no incendiary trash talk with Felder. He just trains hard, shows up on weight, and he fights. That might not get him to a world championship, but he knows that there’s something to be said for showing up and doing something few would dare to do. There’s glory in that. And while he didn’t get the win for his late father on Saturday, you know Tom Felder is proud of his son, and he always was.

Let’s be frank. Before a motorcycle accident nearly ended his career two years ago, Sean Strickland looked good in the Octagon, but never as good as he has in his return. And in beating Jack Marshman and Brendan Allen within two weeks, Strickland is now on the verge of the kind of fight that could propel him into the rankings in early 2021, and from there, he might be bound for a place in the title picture. So what’s been the change? Maybe being on the verge of losing his career has made him want to succeed and evolve even more. That’s a question only Strickland can answer, but in the meantime, we’ll just marvel at how good this guy is getting. 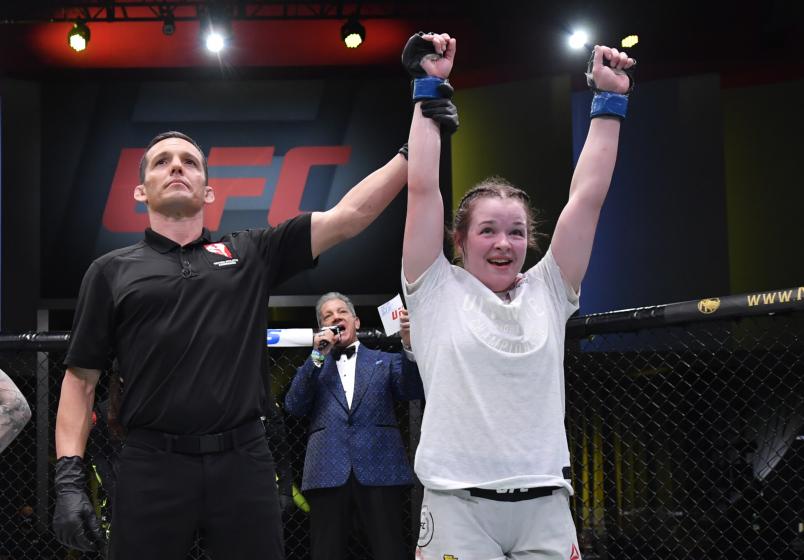 Cory McKenna of Wales reacts after her victory over Kay Hansen in a strawweight fight during the UFC Fight Night event at UFC APEX on November 14, 2020 in Las Vegas, Nevada. (Photo by Jeff Bottari/Zuffa LLC)

Where were you when you were 21 years old? That’s what folks like me are thinking after seeing the youngest fighter in the UFC deliver an impressive performance in beating fellow 21-year-old Kay Hansen on Saturday. Suffice to say, I wasn’t competing at the highest level of a professional sport and winning, to boot. That shows you the dedication and talent possessed by Wales’ McKenna, and it’s going to be fun seeing where she goes in the coming years. Don’t be surprised if this isn’t the last time she faces off with Hansen, either.