UFC continues its run of events in Las Vegas with a thrilling light heavyweight bout with title implications, as No. 1 ranked contender Thiago Santos squares off with No. 3 Glover Teixeira. Also, former UFC heavyweight champion Andrei Arlovski looks to halt the momentum of rising Tanner Boser.

Santos (21-7, fighting out of Rio de Janeiro, Brazil) aims to continue building his reputation as the most aggressive striker in the light heavyweight division and cement himself as the next challenger for the belt. After moving up to 205 pounds in 2018, Santos quickly rose through the rankings with devastating knockout wins over Eryk Anders, Jimi Manuwa and newly crowned champion Jan Blachowicz. He now looks to snap the win streak of Teixeira with another signature performance.

Tied for the most finishes in UFC light heavyweight history, Teixeira (31-7, fighting out of Danbury, Conn.) intends to continue his impressive run and secure his second shot at UFC gold. A member of the UFC roster since 2012, Teixeira established himself as one of the best in the world with wins over former champions Quinton Jackson and Rashad Evans, as well as former title challenger Anthony Smith. He now seeks to take sole ownership of the light heavyweight stoppage record by finishing Santos.

In the co-main, Arlovski (29-19 2NC, fighting out of Coconut Creek, Fla.) hopes to continue his winning ways in 2020 with a vintage KO win, while Boser (19-6-1, fighting out of Edmonton, Alta., Canada) is on the cusp of cracking the competitive heavyweight rankings.

What time is UFC Vegas 13: Santos vs Teixeira? 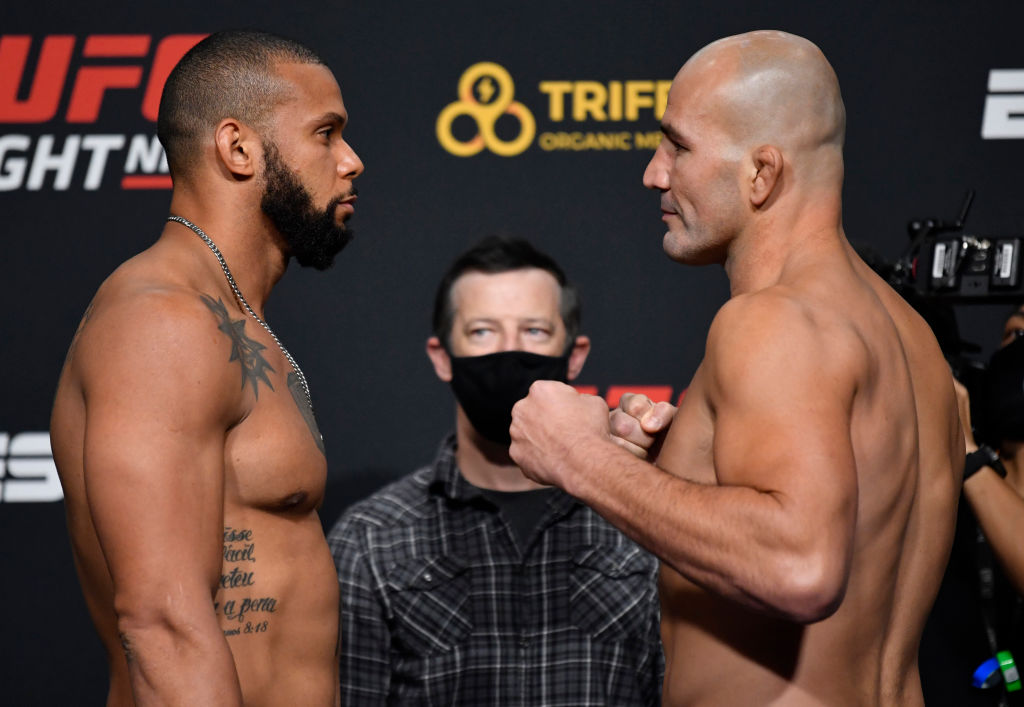 In a bantamweight clash of former training partners, Gustavo Lopez spoiled the return of Anthony Birchak, winning their bout via first-round submission.

Lopez rocked Birchak early, landing hard punches upstairs before taking the fight to the mat briefly. Birchak got up throwing, eager to even the score, but was taken down again. This time, Lopez took his foe’s back and fired off strikes before sinking in the rear naked choke that produced a tap at 2:43 of round one.

Welterweight veteran Max Griffin was sharp from start to finish against Octagon debutant Ramiz Brahimaj, stopping the New York native in the third round.

Both fought at a measured pace on the feet in the opening round, with Griffin slightly busier, but Brahimaj getting in some of his own shots as well. The action picked up as the second round started, but a low kick by Griffin sent Brahimaj to the canvas in pain, producing a brief break in the fight. Once the bout resumed, it was more of the same as Griffin was the busier and more accurate striker, and by the end of the round, Brahimaj was bloodied and having trouble getting into a rhythm against the Californian.

Griffin continued to punish Brahimaj in the third, and after a series of shots along the fence, including a flush elbow, sliced the newcomer’s ear, referee Mark Smith called a stop to the fight at 2:03 of round three.

Official Result: Max Griffin def. Ramiz Brahimaj by TKO at 2:03 of Round 3

Longtime featherweight standout Darren Elkins held off a spirited charge from Eduardo Garagorri to snap a four-fight losing streak and submit his opponent in the third round.

Elkins took Garagorri to the mat 20 seconds in, and while the Uruguayan would keep getting up, “The Damage” would either put him back down or keep him locked up against the fence. And though Garagorri got in a few shots when he saw daylight, there wasn’t much of it for him in the opening five minutes.

Garagorri again tagged Elkins early in round two, but the Indiana native ignored the punches in his quest to put the fight back on the canvas. At distance, though, Garagorri had a lot more success with punches and kicks as he largely stayed upright until the final minute.

In the third, it looked like Garagorri was going to pull away as he continued to land hard shots, but as he tried to throw a knee, Elkins took advantage, locking his foe up until he sunk in the rear naked choke that ended matters at 2:22 of the final round.

Romanov wasted no time scoring the takedown, immediately putting de Lima on his back. The Brazilian got up just as fast and fired off some strikes at his foe. Romanov kept the pressure on in search of grappling exchanges, eventually getting his second takedown with a little over a minute left. And after letting loose with some strikes, a forearm choke ended the bout at 4:48 of the opening frame.

The two engaged immediately, Lewis (7-3) throwing hard as Giles looked to implement his grappling attack. Lewis adjusted well and Giles returned the favor, the two taking turns in control until a sharp jab dropped Lewis in the closing minute.

Giles (13-2) kept his momentum going in the second as he controlled the action on the feet with little coming back to worry him from Lewis.

Coming out with a sense of urgency, Lewis tried to get the fight to the mat as the third round opened, but Giles held off the takedown, and once the fight returned to the feet, Giles let loose with his hands and after dropping Lewis, referee Mark Smith stopped the fight at 1:26 of round three.

Official Result: Trevin Giles def. Bevon Lewis by TKO at 1:26 of Round 3 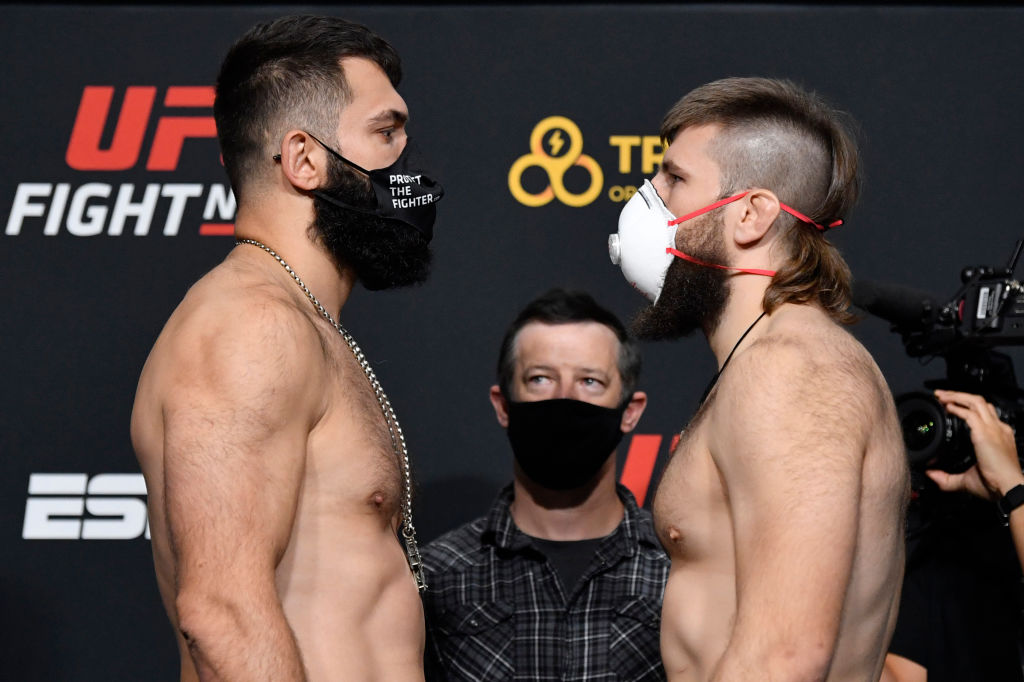 China’s Yan Xiaonan moved to 6-0 in the Octagon with a three-round unanimous decision over Claudia Gadelha in a meeting of strawweight contenders.

The fighters traded punches to start the bout, with a stiff jab from Gadelha setting up a takedown in the opening minute. After a short spell on the mat, the two rose, Gadelha doing whatever she could to get the fight back to the mat, but Yan defended well while landing strikes in the clinch. The two battled until referee Jason Herzog restarted the action, and that was the opening Gadelha needed to score a second takedown, but both landed strikes on the mat before the horn.

Avoiding the takedown in the second, Yan used her speed and command of distance to have a solid second stanza, doubling the significant strikes of her opponent. Gadelha did get to lock up with her opponent in the final round, but was unable to take her down, and when the fight was at distance, it was all Yan, who took the fight 29-28 on all three scorecards.

Featherweight up and comer Giga Chikadze extended his current winning streak to seven with a first-round TKO of Octagon newcomer Jamey Simmons.

Chikadze fought patiently in the first round, waiting for his moment to strike, and after going to the body with his left kick and getting a reaction out of Simmons, the next kick went upstairs, dropping the Milwaukee native to the mat, with the follow-up strikes bringing in referee Herb Dean to stop the fight at the 3:51 mark of the opening frame.

Official Result: Giga Chikadze def. Jamey Simmons by TKO at 3:51 of Round 1

Brazilian bantamweight Raoni Barcelos looked good in his first four UFC fights, but he may not have looked better than he did in moving to 5-0 in the Octagon with an exciting three-round unanimous decision over Khalid Taha.

Barcelos took little time to get warmed up, as he came out throwing bombs at Taha from the start. Taha returned with a couple counters, but then Barcelos took the bout to the mat, rapidly taking his foe’s back. Taha reversed position with 90 seconds remaining, but Barcelos swept his way out of trouble and back to his feet. While against the fence, the two traded positions of control before separating for more striking in the final 30 seconds.

The high-level striking continued into round two, both fighters staying in range and trading throughout. Barcelos was busier, though, and after landing a knee in the closing seconds, a follow-up flurry of punches extended his lead heading into the final stanza.

Barcelos kept pouring on the offense in the third, using his striking to set up a takedown that was followed by a choke attempt. Taha gamely battled out of trouble, and while Barcelos was intent on putting him back in it, the Germany native fought hard to the end, refusing to back down.

The ageless wonder of the heavyweight division continues to roll on, as 41-year-old former champion Andrei Arlovski outpointed Tanner Boser over three rounds to make it three wins in his last four bouts.

The first round was a largely tactical one between the two counter strikers, with Boser slightly busier than Arlovski, who did land a hard right hand in the closing moments of the frame.

The pace remained slow in the second, neither fighter doing enough to start pulling away heading into round three. Arlovski did his best to do just that in the third, as he landed the harder shots on the Canadian, who focused more on leg kicks and quick punches upstairs.

In the UFC Fight Night main event in Las Vegas, Glover Teixeira made his case for a shot at newly crowned light heavyweight champion Jan Blachowicz with an impressive third-round submission win over Thiago Santos.

The victory was the 41-year-old Teixeira’s fifth in a row and the most important, as he roared back to win after getting rocked and dropped by Santos, who was making his first start since nearly taking the 205-pound belt from Jon Jones in July 2019.

Santos went on the attack as the bout began, and he staggered Teixeira with a right hand a minute in. Teixeira looked for a takedown but was turned away, yet after getting tagged again, he was able to lock up with Santos, clear his head and then slam his foe to the mat. Midway through the round, Teixeira had the mount position briefly and though Santos escaped, he remained grounded as the veteran landed hard strikes and controlled the action until the end of the round.

Teixeira took the fight back to the mat to start round two, and he worked hard to improve his position, all the while unleashing punches, elbows and forearms. With a little less than 90 seconds left, he got into side control and continued landing strikes until he nearly finished the bout with a rear naked choke in the closing moments.

Santos turned the tide early in the third as he dropped Teixeira with a left hand and followed his opponent to the mat, where it was now his opportunity to land thudding ground strikes. But in the second minute, Teixeira scrambled his way out of trouble, took the back of the exhausted Santos and ended matters with the rear naked choke that forced a tap out at 1:49 of round three.