Catch All The Action From Vancouver With Your ESPN+ Subscription 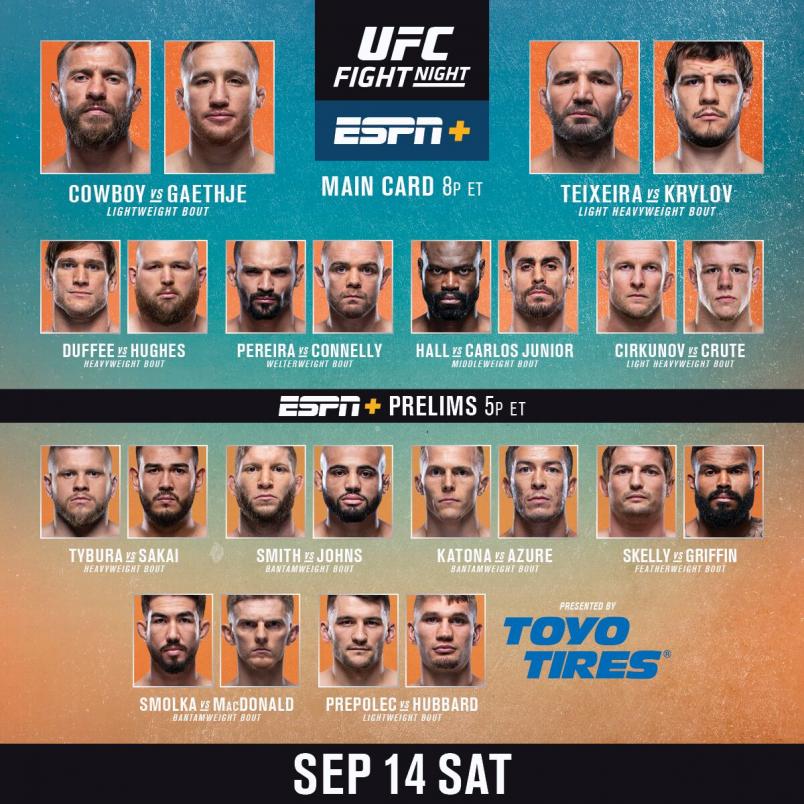 The two prospects kept it standing in the opening round, and though the action was competitive, Prepolec was the more accurate of the two, and he was able to briefly rock Hubbard on a couple occasions.

Prepolec continued to press his striking advantage into round two, but 90 seconds in, Hubbard was able to slow his foe with a quick takedown. Prepolec got up quickly but was dumped again with two minutes left. This time, Hubbard kept his foe grounded, with his control and striking on the mat shifting the momentum of the fight.

Hubbard’s ground game was on display once again in the final frame, as he kept Prepolec’s striking game on ice and wrapped up the victory via three scores of 29-28.

Primarily known for his ground game, bantamweight standout Louis Smolka showed off his striking attack against Ryan MacDonald, with the result being a first-round stoppage victory.

Smolka’s striking game was on target from the time the fight began, and it got progressively worse for MacDonald. Mixing his shots to the body and head, Smolka drilled MacDonald with a left to the head with 30 seconds left, staggering the Nebraskan. Moments later, he knocked MacDonald down with a right hand and referee John Cooper had seen enough, halting the bout at 4:43 of the opening frame.

A scramble put the fight on the mat early in the first round, and Skelly nearly ended matters with a choke, but Griffin escaped with a little over a minute left and had some solid moments on the feet before the horn sounded.

With Skelly apparently winded by his attempt to finish in the previous round, Griffin continued to have success with his striking in round two and went on to put his foe on his back in the second minute. Soon, Griffin had the mount and then Skelly’s back, but as the two rose, Skelly somersaulted his way out of trouble and he went on to take Griffin’s back. Again, the rear naked choke attempt came up empty, but his control of the action likely earned him the round.

Looking to turn things around, Griffin nearly caught Skelly in a guillotine choke attempt as he defended a takedown, but Skelly got loose and it was back to the back position. Now it was Griffin’s turn to try to flip his way free, but to no avail. Griffin finally got loose in the last minute, but a last minute choke wasn’t able to secure the win for the Milwaukee product.

Neither fighter was able to pull ahead in a competitive first round, with both fighters’ attacks being defended well.

Azure scored a flash knockdown early in round two, and it was clear that he had the heavier hands in the matchup, but Katona adjusted well, scoring a takedown midway through the frame. Azure rose quickly, but Katona kept him pinned to the fence.

With the fight remaining close into the fourth minute of the final round, it looked like a takedown and ground control from Katona in the final 60 seconds would allow him to leave with the victory, but it was Azure getting the nod via scores of 30-27 and 29-28 twice.

In a battle of bantamweight unbeatens, Miles Johns kept his “0” as he won a three-round split decision over BC’s own Cole Smith.

Smith’s goal was to grapple with Johns and he got his wish, locking up with his foe and staying on his back against the fence for much of the first frame.

Johns answered back in the first 30 seconds of round two as he scored a takedown that put Smith on his back. With a little over three minutes left, Smith got loose and back to his feet, then used his strikes to put Johns on the mat. The Squamish product quickly took Johns’ back. Johns was able to reverse position and get into his foe’s guard, and he stood there until the end of the round.

In the third, Johns was able to get enough distance to land some hard shots on his foe, and the strong finish proved to be sufficient for the Dallas product to get the victory.

Brazil’s Augusto Sakai impressed in the UFC Vancouver featured prelim, as he knocked out fellow heavyweight contender Marcin Tybura in a single round.

After a brief feeling out process, Sakai rocked Tybura with a right hand, and he saw the finish in front of him, so he unloaded with both hands before a series of rights put the Poland native down and brought in referee Jason Herzog to stop the fight 59 seconds into the opening frame.

Canadian veteran Misha Cirkunov pinned the first loss on the record of Jimmy Crute, submitting the Australian light heavyweight prospect in the opening round.

Cirkunov grounded Crute almost immediately, yet midway through the round, the Aussie phenom was able to get free. The two scrambled and traded dominant positions, and just when it looked like Crute was close to a finish thanks to some thudding ground strikes, it was Cirkunov who got the victory as he got out of trouble and sunk in a Peruvian necktie choke that forced a tap at 3:38 of round one.

Carlos ate a right hand early and responded with a takedown of Hall. Hall rose, but it was with the bloodied Brazilian Jiu-Jitsu black belt on his back. Midway through the frame, Hall got loose and put his striking game to work, scoring particularly well with his jab. Carlos, his nose clearly broken, weathered the attack and used a right hand upstairs to set up another takedown late in the round.

Midway through round two, Hall dropped Carlos with a right hand and began firing off ground strikes. The Brazilian shook off the blows and went back to his grappling attack after Hall let him up, but he was unable to secure another takedown.

Carlos dragged Hall to the mat in the opening minute of the final round, and he held the back position for the rest of the stanza, even though he wasn’t able to submit “Prime Time” before the bout ended.

Filling in on five days’ notice and fighting up a weight class, Vancouver’s Tristan Connelly thrilled his hometown fans with a Rocky-esque performance in upsetting Brazilian welterweight Michel Pereira.

After dancing on the way to the Octagon and in it while being introduced, Pereira kept the energy high in the opening stages of the fight, but Connelly dodged his foe’s flashy moves and tried to implement his game. Pereira kept the heat on, just missing with some flying knees before getting a takedown. A flip was followed by a guillotine choke attempt, but again, Connelly stayed out of trouble and nearly sunk in his own guillotine before the horn sounded.

Fatigue rapidly set in on Pereira, who missed weight at 172 pounds, and Connelly sensed it as he marched forward in the second round and pressured the Brazilian. With a little over two minutes left, Pereira got a takedown, and while he kept Connelly grounded, it appeared to be more of a move to get his wind back than to score.

Seeking another takedown to open the third, Pereira almost got caught in a guillotine choke by Connelly, and while he escaped, it was clear that his gas tank was now empty. Connelly got the fight back to the mat in the second minute and went to work, grounding and pounding his way to the victory on the scorecards.

Todd Duffee vs Jeff Hughes Ruled A No Contest. Doctors Stoppage, Round 1, 4:03

What was shaping up to be an interesting heavyweight scrap between Todd Duffee and Jeff Hughes had an unfortunate ending when an inadvertent eye poke rendered Duffee unable to continue, prompting a no contest verdict.

Back in action for the first time since July 2015, Duffee (9-3, 1 NC) implemented his grappling game first before going back to his old faithful of swinging hammers, and after getting cut by a Hughes left hand, he scored a flash knockdown of the Ohioan midway through the first round. Hughes (10-2, 1 NC) recovered and a firefight broke out, but in the midst of an exchange against the fence, Duffee took a poke in the eye, and when he told the Octagonside physician that he was seeing double, the bout was waved off at the 4:03 mark.

Nikita Krylov went the distance for the first time in his career, but the decision didn’t go his way in the UFC Vancouver co-main event, as he lost a three-round split decision to fellow light heavyweight contender Glover Teixeira.

Teixeira began the bout with a takedown, and after patiently working, he took Krylov’s back. Just past the midway point, though, Krylov got himself free and had control on the mat for a spell until Teixeira stood. Krylov stayed focused and nearly locked in a choke, but with a minute left in the frame, Teixeira got free and the two stood. Teixeira got the better of the exchanges down the stretch, but Krylov did get a flurry in before the horn.

The bloodied Teixeira continued to have success with his left hook in the second round, but Krylov’s stick and move strategy was frustrating the Brazilian, who also got taken down in the final 30 seconds of the frame.

As the two went to the mat in the opening minute of the final round, Teixeira almost locked in a guillotine choke, only to see Krylov fight his way free. Teixeira ultimately found his way back to the top position, but midway through the round the two rose while maintaining their grappling positions. In the final 90 seconds, it was another visit to the mat, where it stayed until the end of the bout.

Lightweight contender Justin Gaethje made it three straight knockout wins in the UFC Vancouver main event Saturday night, and he looked better than ever as he finished veteran star Donald “Cowboy” Cerrone in the first round.

Gaethje fed Cerrone a steady diet of leg kicks in the early going, and when he went upstairs with his punches, he was scoring well and landing flush shots that got his opponent’s attention. Not surprisingly, Cerrone stayed in the fray, but a right hand with under a minute left hurt and dropped him. Cerrone rose before another right put him down. Gaethje hesitated to keep throwing punches at his fallen foe, but had to land a couple more before referee Jerin Valel intervened at the 4:18 mark of round one.