LAS VEGAS –UFC, the world’s premier mixed martial arts organization, today unveiled the first-everUFC Ulti-Man Bobblehead, to commemorate the iconic character that has been featured by the global brand since the historic UFC® 1: THE BEGINNING, which took place on Saturday, November 12, 1993, at McNichols Arena in Denver, Colorado. 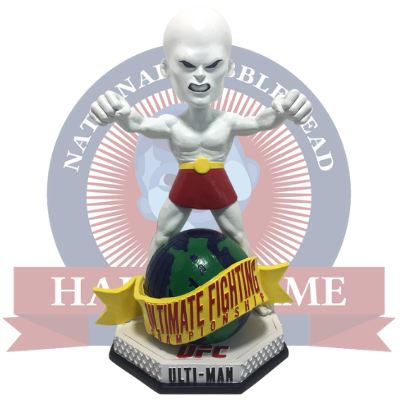 “UFC fans are extremely passionate and we’re confident that they are going to love the first bobblehead of Ulti-man,” said Phil Sklar, Co-Founder and Chief Executive Officer of the National Bobblehead Hall of Fame and Museum. “The level of detail on this bobblehead is incredible, and fans won’t want to miss out!”

Ulti-Man first appeared on the canvas of the world-famous Octagon® at UFC 1 and has since become one of the global brand’s most recognizable symbols around the world, as it appeared on the original UFC championship belt and was used as a primary logo on early marketing and branding assets.

UFC has celebrated its silver anniversary throughout 2018 and recently hosted its historic 25th anniversary event withUFC® FIGHT NIGHT: THE KOREAN ZOMBIE vs. RODRIGUEZ, which took place on Saturday, November 10 at Pepsi Center in Denver. To commemorate the event, the Ulti-Man character returned as center placement inside the Octagon.

Created by UFC licensee, Out of the Box Promotional Marketing, LLC. and manufactured by the National Bobblehead Hall of Fame and Museum, this unique and officially licensed bobblehead is now available for pre-order to fans in the United States in the National Bobblehead Hall of Fame and Museum’s online store for $40 (February delivery) or $45 (delivery before Christmas). Purchases from the online store will also incur a flat rate shipping charge of $8 per order.