Released May 10 on Blu-ray™ and DVD 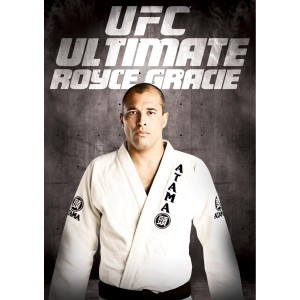 BEVERLY HILLS, CA – Considered the most important fighter in mixed martial arts history, Royce Gracie is a legend in the sport he helped define. On May 10, Anchor Bay Entertainment released UFC®: Ultimate Royce Gracie, an action-packed two-disc tribute to this UFC Hall of Fame member containing his most memorable fights and most spectacular submissions.

“He is the godfather. He is the man who started it all and we all bow down and kiss the ring of Royce Gracie,” UFC® president Dana White said. “He kick-started the entire sport of mixed martial arts.”

UFC®: Ultimate Royce Gracie shows the progression of this master of MMA, starting with the very first UFC® event, UFC® 1, where he defeated three opponents in one night. Gracie would go on to defeat four opponents in UFC® 2 making him the most imposing competitor on the scene. This is chance for fans to relive Gracie’s incredible fights with Ken Shamrock, Kimo Leopoldo, Kazushi Sakuraba and many more.

A captivating look at one of the top UFC® fighters of all time, UFC®: Ultimate Royce Gracie showcases the rise of a man who popularized the art of Brazilian Jiu Jitsu and revolutionized the sport of MMA as we know it. Holding the record for most submission wins in UFC history with 12, the legendary Gracie blazed the trail for the modern day warriors who grace the UFC’s hallowed Octagon®.

With UFC®: Ultimate Royce Gracie, fans can pay homage to a living legend, a man who shaped the world’s fastest growing sport. In this tremendous two-disc set, the world will witness the journey of Gracie and his evolution in becoming a worldwide superstar.