Saturday’s UFC Sydney event is in the books, and now that the dust has settled down under, it’s time to go to the scorecard to see who the big winners were at Qudos Bank Arena.

1 – Frank Camacho and Damien Brown
Had to put this pair of Fight of the Night winners together because separating them defeats the point. Yes, Frank Camacho missed weight and he emerged victorious, but Damien Brown can’t be listed as 1a or 2 on this list because it takes two to put together a war like these lightweights delivered in Sydney, and while Brown didn’t get a win bonus, calling him the loser of this fight just doesn’t feel right. Bottom line, fights like theirs is why we watch combat sports. No, it wasn’t because they were swinging hammers at each other – though that helps. It was because you don’t find this kind of gritty determination in any other sport. Both guys left it all in the Octagon in search of victory, not worrying about how sore or banged up they’d 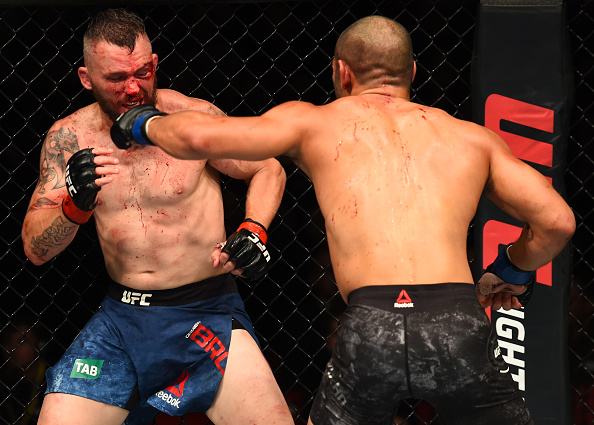 UFC Fight Night event inside the Qudos Bank Arena on November 19, 2017 in Sydney, Australia. (Photo by Josh Hedges/Zuffa LLC/Zuffa LLC via Getty Images)" align="right" /> be in the coming days. Yet as bizarre as that may sound to a non-fight fan, to someone who loves the sport or competes in it, it makes all the sense in the world. Ask analyst and UFC veteran Dan Hardy, who stood and clapped at Octagonside in the final seconds of the bout. Or ask Camacho, himself, who told me before the fight, “For me as a martial artist, I love adversity, I love getting pushed to that limit, and I love those battles where you have to dig down and you have to get up when you can't get up.”

2 – Nik Lentz
Nik Lentz has had his share of, let’s say, less than thrilling performances over the years. But if you look at his body of work since his UFC debut over eight years ago, and there are three Fight of the Night awards, four finishes and last Saturday’s Performance of the Night submission of former teammate Will Brooks. In beating Brooks, Lentz made it wins in three of his last four since returning to the lightweight division, so he’s in the mix in a tough division. But more importantly, in a post-fight interview in which he said he would fight his mother if she was in the Octagon and then called for his former American Top Team squad to face him one by one, Mortal Kombat style, “The Carny” created some significant buzz when it comes to what’s next for him.

RELATED: Watch Werdum's Reaction in the Octagon | Recap the Action From Sydney - Main Card | Prelims
3 – Elias Theodorou
I don’t want to toot my own horn (honk, honk), and maybe I was sitting on the fence when breaking down Elias Theodorou’s bout with Daniel Kelly, but I did write last week that the potential was there for one of two things: an ugly grappling affair or an entertaining brawl. There was no middle ground, but luckily, we got the entertaining brawl. More importantly, it looked like Theodorou entered the fight with a chip on his shoulder and something to prove against sudden rival Kelly, and he delivered with one of his more focused performances. That should be a sign to the rest of the division to not get “The Spartan” angry because you won’t like him when he’s angry.

Tai Tuivasa kicks Rashad Coulter during Fight Night Sydney" align="center" />
4 – Tai Tuivasa
A 23-year-old heavyweight with knockout power in his fists and the ability and willingness to end fights with flying knees? I’ll take it, and with the arrival of Australian banger Tai Tuivasa and his first-round knockout of Rashad Coulter, a division where most of the contenders are in their 30s now has an injection of young blood that should keep things very interesting among the big men for several years. Yeah, I know, we don’t know if he has a ground game, can he take a punch, yada, yada, yada. Can’t we just enjoy a fighter who went out there and delivered a spectacular finish in his debut for a couple days?

5 – Nadia Kassem
Yes, Nadia Kassem missed weight for her UFC debut, and yes, she didn’t put on the “perfect” fight against Alex Chambers, but in her victory over the tough Aussie vet, Kassem did show flashes of a fighter who can make an impact at 115 or 125 pounds in the coming years. There was a nice variety to her striking, some solid ground work when taken down, and in her first fight that went past 87 seconds, she showed grit in taking the decision win. And she’s only 22, so there is plenty of room to grow. Of course, the degree of difficulty gets ramped up when you have to do that growing in the UFC, but Kassem has the potential to handle all that just fine.