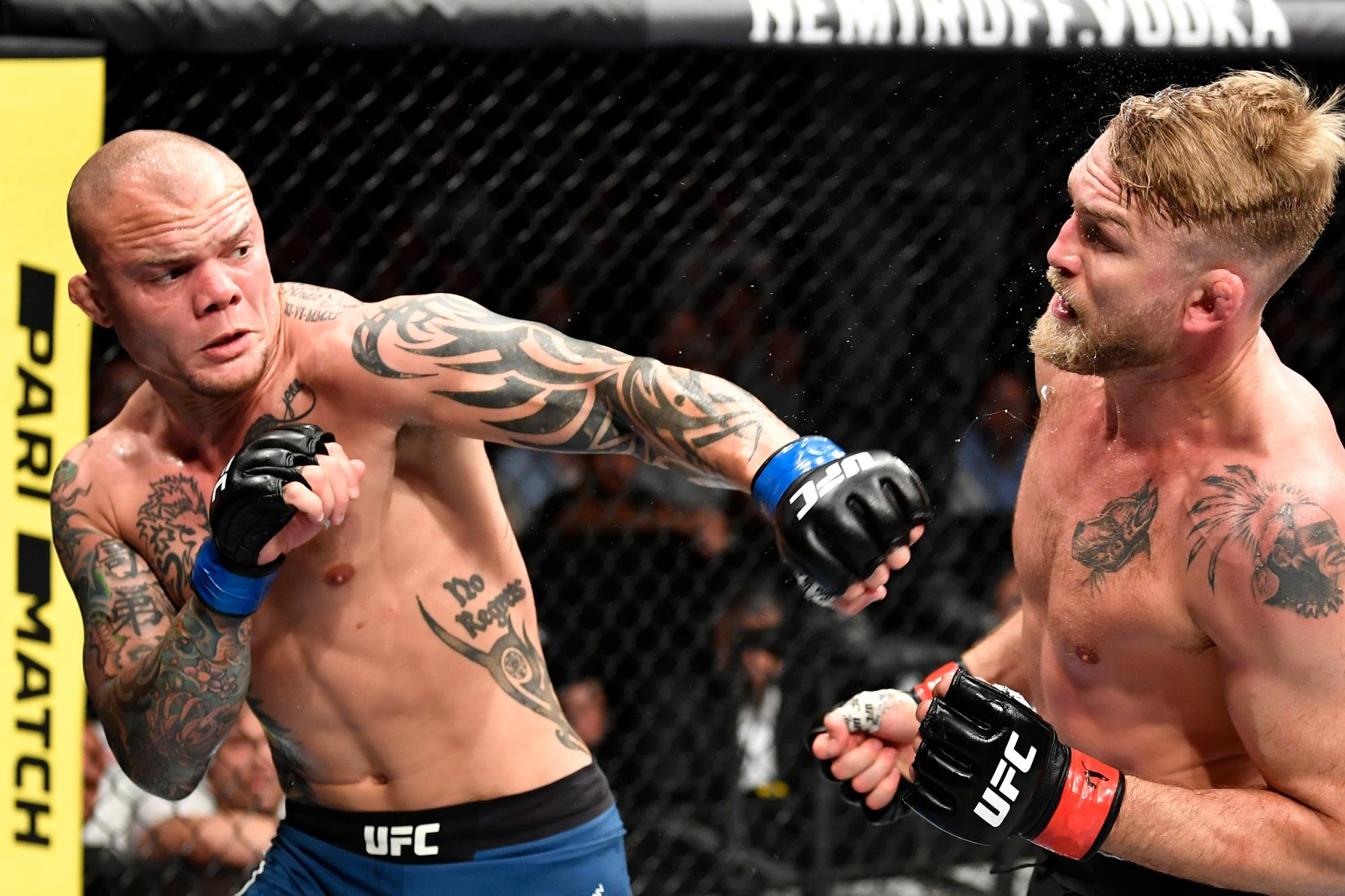 The Performance Bonuses And Talking Points Of UFC Stockholm: Gustafsson vs Smith
By Steve Latrell • Jun. 2, 2019
Performances of the Night

With his fourth round submission of Alexander Gustafsson, Anthony Smith recorded his fourth finish since moving up to light heavyweight. Since 2018, no fighter in that division has more. Fighting through a broken hand sustained early in the fight, Smith washed away the sting of his disappointing loss to Jon Jones last march, and kept himself squarely in the upper end of the division.

“I told you, I’m not a flash in the pan,” Smith said backstage. “This isn’t an accident. I’m here for reason…I think a lot of the hate is people just haven’t gotten used to it. You’re going to have to figure that out. I’m not going anywhere. I’m really not.”

If increasingly crowded light heavyweight field sleeps on Aleksandar Rakic, they do so at their peril. Needing a mere 42 seconds to knock out veteran Jimi Manuwa, Rakic sits behind only Dom Reyes for the longest active win streak in the division. And while finishes are always sweet, even Rakic admits there’s something special about knocking out a living legend.

“Oh course. A knockout is like the king in chess. And especially this type of fighter. Jimi is a long time in that business and a long time in the rankings…after winning with that kind of knockout, it makes me really proud.”

After some testy exchanges with his opponent in the days and weeks leading up to the fight, “Mr. Finland” earned his bragging rights Saturday night, surviving a second round submission attempt from Chris Fishgold, and easing into position to secure one of his own.

“I wanted to give the fans what they came to see. My idea was to make him tired. I saw that he gets tired easily and I’m in the best shape of my life, even though I have been away for a year. That was my plan: get comfortable in the octagon and whenever I see an opportunity, take it, get the paycheck and go home.”

Folks who argue “ring rust” is a myth will likely point to Leonardo Santos’ KO victory over Stevie Ray as Exhibit A. Nearly three years removed from his last Octagon appearance, Santos starched the Scotsman in the first round, and extended his lightweight win streak to five.

“After the fight, I was so excited. And it is as if the Octagon is too small to contain my excitement and all that I felt after the knockout, so I started running to thank god and celebrate. Now, I want to stay active: more fights, more wins!”

Rarely has an arena gone from raucous to silent so quickly as the Ericsson Globe did when Anthony Smith submitted their hometown icon. It felt as if the crowd was controlled by a light switch that had suddenly been shut off. But a far greater shock followed just minutes later when Alexander Gustafsson laid his gloves on the canvas of the Octagon and declared: “The show is over.”

While he came out on the losing side of his tilt, The Mauler had looked fast and efficient  throughout the fight. At just 32 years of age and perennially near the top the light heavyweight division, it was a curveball nobody saw coming. Gustafsson stayed back to talk to the media after the fight and explained his decision.

“I fight because I love this sport, because I want to be the best and compete against the best. It feels like I don’t have it anymore. I have done it for a long time. I’m 32 years old, I have kids, built the life that I wanted thanks to this sport. It feels like I’m getting old. We all have to realize that it’s the end of the story. I never did this for the money or anything like that… I did it because I want to be the best and if I can’t be the best then it is what it is. Now, I’ll focus on my kids, I own a gym and have a couple of other projects going on… Let’s see what’s next. I built the life that I wanted, so let’s see what is the next chapter.”

While it wasn’t a clean sweep for the native fighters, there were plenty of performances that gave Sweden reasons to cheer. Stockholm’s Bea Malecki got a convincing win in her UFC debut, submitting Duda Santana in the second round with a rear naked choke. Daniel Teymur got into the win column with a strong performance over the highly-touted Sung Bin Jo. And in her first UFC fight in her home country, Lina Lansberg put on the performance of her career, holding off a relentless Tonya Evinger with her patented weapon that earned her the nickname “Elbow Queen.”

"This was amazing,” said Lansberg, draped in the Swedish flag. “This is something I'll remember the rest of my life and tell everybody about."