UFC Stars Align, Stage is Set for The Time is Now

Watch the complete "The Time Is Now" Press Conference from the Smith Performing Arts Center in Las Vegas on Monday, Nov. 17. 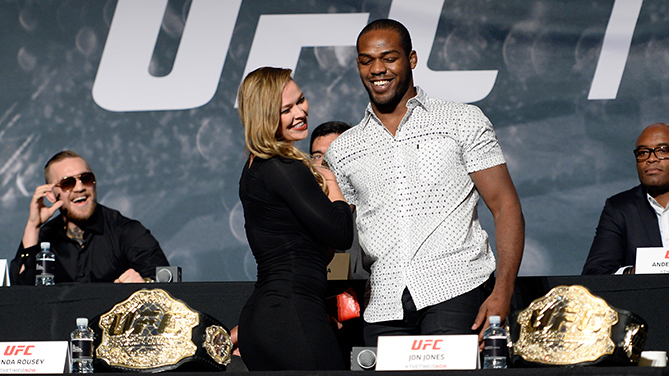 In professional sports, the NFL, NBA, the Premier League, Major League Baseball and other major leagues all revolve around a season’s worth of anticipation, schedules, fixtures, games, matches and championships.

The UFC, entering its 22nd year in 2015, is embarking on its own season, and following suit by highlighting a three-month stretch of headline events and championship matchups that promises to reignite the sport.

At a star-studded press conference at the Smith Center for the Performing Arts in Las Vegas, UFC President Dana White and holders of most of the UFC’s belts – among them, Ronda Rousey, Jon Jones and Chris Weidman, - introduced “The Time is Now” campaign to the MMA world, along with a schedule of dates for 2015.

The next few months of title bouts and simmering feuds, including the much-anticipated Jan. 3 clash at UFC 182: Jones vs. Cormier in Las Vegas, signal a reboot to the UFC after what was admittedly a difficult period of injuries and subsequent schedule interruptions.

“Obviously this last year was a very crazy year for us,” White said. “2012 was brutal, but with the injuries we had this year, it was so much different because it (affected) co-main and main events.”
> MORE: UFC Rewards | Time To Get Excited | Brown vs. Saffiedine | Tickets for UFC 182-184 on Sale Friday 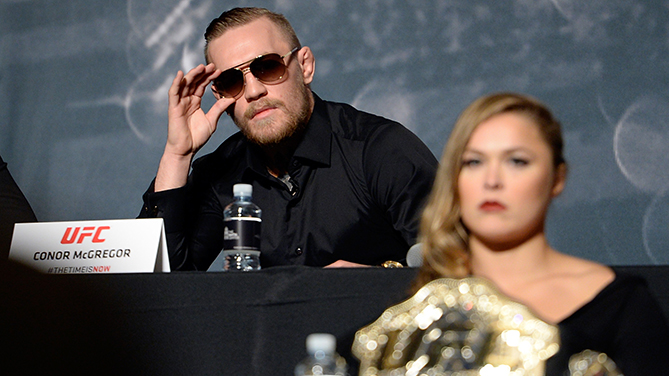 Many of the UFC’s elite missed dates this year because of training injuries, which threw a wrench into the UFC’s best-laid plans.

White said the upcoming schedule should revitalize everyone.

“We took this block, ‘The Time is Now,’ and we’re coming off this year, with all these injuries, and the way that a lot of people look at these things – television networks, fans, etc. – they look at things in seasons. NFL, NBA season, baseball,” White said.

“So we’re taking this block of fights here, ‘The Time is Now,’ and we’re coming into the new year with all these great fights.”

White then gestured to the fighters on stage with him. “And all of these guys are going to stay healthy and train smart,” he said, drawing huge laughter, “And these fights will happen in 2015.”

The Time is Now” campaign, which was conceived by a group under the guidance of UFC’s Chief Global Brand officer Garry Cook, represents two important resets for the UFC in the coming year.

“There has never really been a time like this, in UFC ‘s history, where a group of events can come together and be that much more powerful than one single event,” Cook said. “It’s a change in dynamic there.” 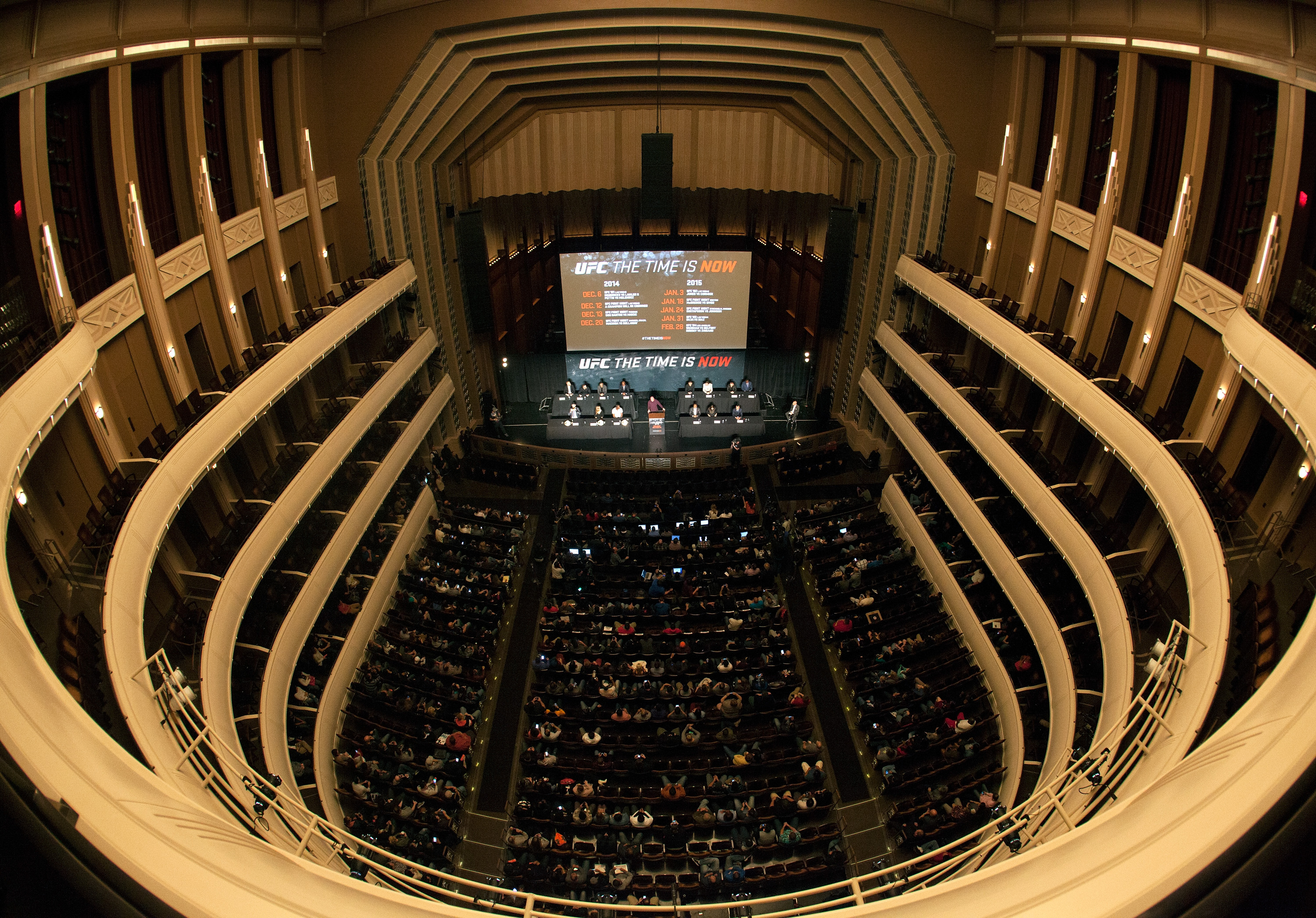 From a business perspective, Cook said, “The Time is Now” also represents a takeoff and landing for the UFC as a brand.

“If you look at the exterior world, which is television, retail, consumer behavior –that market, that world, doesn’t think in terms of single events,” he said. “It thinks about seasons. Even in the television world, people talk about the ‘the season finale’ or ‘the season premiere.’

“So it’s really how much more powerful can a collective (of events) be. How do we motivate and create a call to action for something that is most powerful. And that time is now, for everybody. Not just for the fighters, but for the employees, investors, everybody.

“This is the reboot of the UFC, and our entire business.” 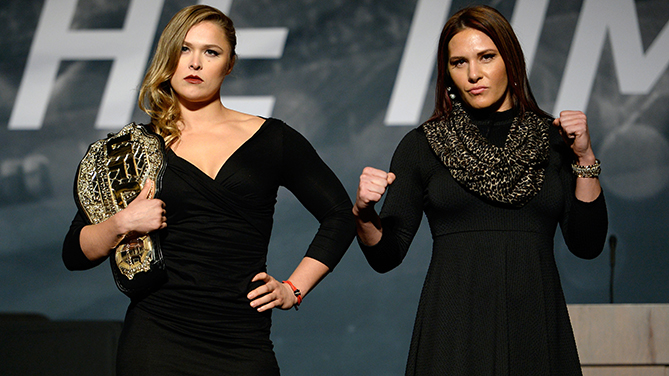 So what did the fighters say? Here are some highlights of Monday’s question and answer sessions with the athletes who will be on center stage for “The Time is Now.”

Ronda Rousey, on her eagerness to return to action again Cat Zingano at UFC 184 on Feb. 28 at the Staples Center in Los Angeles; the fight was originally scheduled for Jan. 3:

“I don’t get ready. I stay ready. I’m the best in the world, every single day of the year, including Feb. 28. So I’m excited. I’m stoked … my first year fighting, I fought six times in one year. So yeah, I’m been aching to get back in there, especially in front of my hometown at the Staples Center. It’s going to be awesome.”

Rousey, on her recovery from knee surgery, and whether Cat Zingano is her toughest challenge yet:

“I feel like a ninja! Of course, she’s my toughest challenge to date. She’s the one chick that I haven’t beaten yet. If there is a bigger challenge than her, well, that just wouldn’t make any sense. She’s undefeated, she’s has a great style in the gym, she’s going to push me a lot. This is one of those fights that’s going to happen in the middle of the ring. I just hope she’s healthy and 100 percent, because I want to test myself against the best in the world. Besides myself.

“I know she’s going to bring it. So heal up! Because we have some great company on the stage, and it’s going to be a tall order to show all these guys up. So you better bring it, girl!” 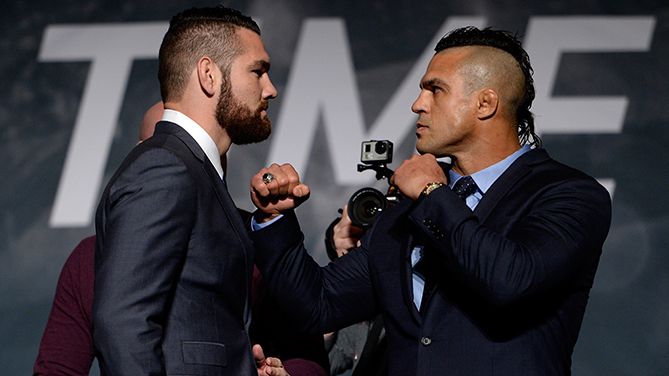 Vitor Belfort, on being the type of fighter who does not talk trash about his opponents, including his co-main event foe for UFC 184, Chris Weidman:

“I don’t talk trash. I keep training. I’m very confident in my preparation. And I believe that arrogance needs advertisement. Confidence is for yourself … I’m so grateful to be competing in the UFC, and so grateful for the Fertittas and Dana to bring it to the mainstream. So I’m so excited, so happy, to get my third title in February of 2015.” 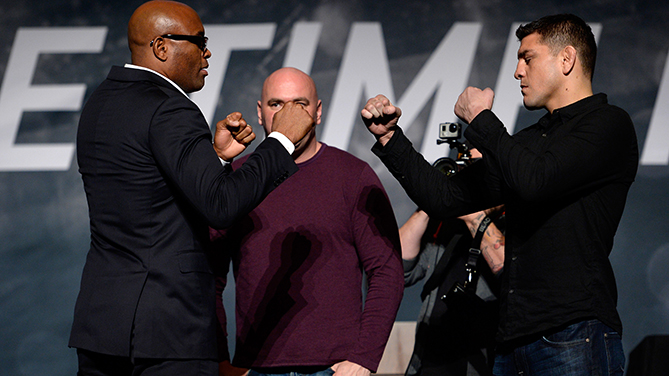 Nick Diaz, asked about Georges St-Pierre suggesting Diaz “made a mistake” accepting his fight against Anderson Silva at 185 pounds, rather than a catchweight:

“George didn’t take the fight – he should have taken the fight when he had the opportunity,” Diaz said. “I took the fight, and he’s running his mouth. The fact is, I planned for a catchweight, but who knows who can make what weight? I just want to be the best I can be. I’m not trying to put my opponent through any extra work or anything like that.

“I’m going to fight him, and not ask him to come down to fight me … as long as it’s a big fight that fans want to see.”

Diaz, on how his 18-month layoff from the sport has affected him in his return:

“It was a good learning experience for me, being away from fighting … It was good to try to live life like a normal person. I needed some time off. It came at the right time.”