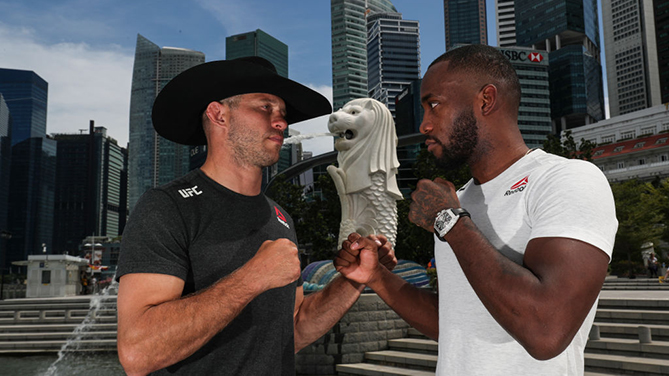 DONALD CERRONE VS LEON EDWARDS
Darren Till had a breakthrough performance when he faced Donald Cerrone in Poland last October and it propelled him to the top of the welterweight division. If fellow Brit Leon Edwards wants to follow Till up the 170-pound ladder, he has his chance this weekend in a main event with “Cowboy,” who bounced back from the Till loss with a stoppage of Yancy Medeiros in February. That win proved that there’s still gas left in the tank of Cerrone, and he’s fired up to get the job done again when he faces Birmingham’s talented “Rocky.”

OVINCE SAINT PREUX VS TYSON PEDRO
Very interesting matchup at 205 pounds between Ovince Saint Preux and Tyson Pedro. Pedro is the once-beaten Aussie who like to gets his fights over with quick. OSP is the veteran who can look like the best light heavyweight in the world on some nights and a fringe contender on others. If he’s on top of his game this Saturday, Saint Preux will be tough to beat, even for a rising star like Pedro.

A title contender will likely emerge from the flyweight bout between Jessica-Rose Clark and Jessica Eye. Eye has a new lease on her career since returning to 125 pounds, and she’s hungry to take advantage of this opportunity to chase after some championship gold. Australia’s Clark seemingly came out of nowhere to beat Bec Rawlings and Paige VanZant in her first two UFC bouts, and if she adds another notable name to her resume in Singapore, count her as a leading challenger to fight for the belt sooner rather than later.

LI JINGLIANG VS DAICHI ABE
Here’s my pick for Fight of the Night, and not only should the welterweight bout between Li Jingliang and Daichi Abe be a great action fight, but it should also be a reminder of the quality fighters on the rise from Asia. China’s Li has emerged as a must see in the last couple years, and Japan’s hard-hitting Abe should join him pretty soon. How soon? Maybe Saturday is his day.

TERUTO ISHIHARA VS PETR YAN
Russia’s Petr Yan will have diehard fight fans up bright and early on Saturday morning as they watch the highly-touted prospect make the walk to the Octagon for the first time. And while he looks like he has all the tools to make his mark in the UFC, he’s in tough with Japan’s Teruto Ishihara, who has the perfect chance to right his ship after losses in three of his last four bouts and get back on the road to the top.

HAVE A NIGHT YOUNG MAN!

After a POTN in his first bout, Yadong Song looks to shock the crowd once more. #UFCSingapore pic.twitter.com/r6PASY0Aha
— UFC (@ufc) June 21, 2018

China’s Song Yadong made an immediate impression in his UFC debut as he submitted Bharat Khandare in November. But going from a fellow debutant competing in his eighth pro fight to facing 30-fight veteran Felipe Arantes is a big leap for the 20-year-old. Song does have talent, though, so this may be a coming out party for him on the big stage against Brazil’s “Sertanejo.”

ROLANDO DY VS SHANE YOUNG
Shane Young had a tough go of it in his UFC debut, coming in on short notice to face Alex Volkanovski, but he still went three rounds before losing a decision. On Saturday, he’s coming in with a full training camp and he’s amped up to show what he can do against Filipino banger Rolando Dy.

SONG KENAN VS HECTOR ALDANA
Song Kenan’s 15-second knockout of Bobby Nash in his UFC debut didn’t give us a lot to look at, but what we saw, we liked. On Saturday, he faces Mexico’s Hector Aldana, who is quite the mystery, having not fought since a loss to Enrique Marin on TUF Latin America 2 in April 2015. Aldana likes to throw, though, and so does Song, so this might be a firefight for as long as it lasts.

SHINSHO ANZAI VS JAKE MATTHEWS
Shinsho Anzai is a truth machine in the Octagon, meaning that if you haven’t truly prepared for the fight, he’s going to find out. It’s the perfect scenario for Jake Matthews, who has won two in a row since moving back to welterweight and is intent on keeping that streak going in a fight that could earn him his second straight Fight of the Night bonus.

VIVIANE PEREIRA VS YAN XIAONAN
Rising stars at strawweight meet, as Viviane Pereira takes on Yan Xiaonan. Yan is unbeaten in seven straight, and while Pereira is coming off a loss to Tatiana Suarez, she will be the favorite when the Octagon door shuts on Saturday.

MATT SCHNELL VS NAOKI INOUE
Japanese up and comer Naoki Inoue is unbeaten as a pro, and the 21-year-old will put that perfect slate on the line against TUF 24’s Matt Schnell, who bounced back from a rough start to his UFC career to win his last bout against Marco Beltran.

JENEL LAUSA VS ULKA SASAKI
Jenel Lausa likes to throw hands, and if he wants to do that against the tallest flyweight in the division, 5-10 Ulka Sasaki, he’s going to have to close the distance fast. If he succeeds, he’ll need to land early and often on Sasaki, because the Japanese veteran only needs a moment of daylight at close range to grab his foe, take him to the mat, and submit him.

JI YEON KIM VS MELINDA FABIAN
We open up the night with what should be a fast-paced bout in the flyweight division, with scrappy Melinda Fabian making her second UFC start against Ji Yeon Kim, who is 1-1 in her first two Octagon bouts.