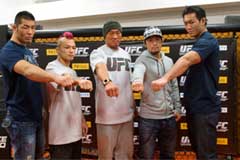 The announcement was made in a joint press conference held Monday at Yoshihiro Akiyama’s Cloud Dojo by senior executives from the UFC®, TV Bank and NTT Plala.  The digital media distribution deals will enable significantly wider access to a range of UFC content to Japanese MMA fans.

First, UFC® officials announced a deal with TV Bank Corp. which will provide an Official UFC Mobile site across all three major Japanese cellular networks - NTT Docomo, KDD AU and Softbank. The agreement with TV Bank Corp. will ensure that UFC® updates, ringtones, wallpapers, fights on demand and other exciting content are made available to UFC fans in Japan.

Most news and features will be accessible for free, while premium content will be available on a pay basis.  The partnership establishes TV Bank, a subsidiary of major Japanese digital media company Softbank, as the UFC’s primary online content distributor in Japan.

In a second announcement for Japanese UFC fans, UFC officials confirmed an agreement with the Hikari TV, the internet protocol television network (IPTV) operated by NTT Plala Corp.  The digital network will air delayed live and archived UFC bouts, as well as classic fights from the famed PRIDE® library. Hikari TV currently enjoys a rapidly growing subscriber base of more than 1.3 million subscribers in Japan.

Both the Official UFC Mobile site and UFC/PRIDE content on Hikari TV will be launched on Feb. 1, 2011.

“Today is a very important step in expanding our media platforms to bring the UFC to more Japanese fans than ever before,” said Mark Fischer, UFC Executive Vice President and Managing Director of Asia. “We want to make sure that any fan who wants to watch the UFC has the best access they can and, at the same time, reach new fans.”

“The UFC’s popularity is growing on a daily basis around the world, and we’re delighted to be one of the UFC’s partners to help them grow in Japan,” TV Bank’s Nakagawa said. “We are a subsidiary of Softbank, but we also deal with other networks, such as NTT Docomo and KDDI AU.  Our plan is not to monopolize the content, but rather for the UFC brand name and the sport to become more popular in Japan.  Of course, we’re also very happy to provide a way for fans to see Japanese fighters competing abroad.  Our ultimate goal would be to assist in any way possible, to bring the UFC to Japan.”

“The UFC is a sport that is popular worldwide and we’re excited about this opportunity,” Bando said.  “In our sports programming, we already have Japanese Baseball and Japanese Soccer, but adding UFC content will certainly boost our sports offering.”

UFC’s increased presence in Japan comes just weeks after the organization added three exciting Japanese fighters. The highly-decorated Norifumi "Kid" Yamamoto will make his UFC debut at UFC 126®: SILVA vs. BELFORT on Feb. 5 in Las Vegas, while featherweight Michihiro Omigawa returns to the UFC on the same date. Middleweight Riki Fukuda will also join the UFC, making his debut at UFC® 127: PENN vs. FITCH in Sydney, Australia on Feb. 27.

“There has never been a better time to be a UFC fan in Japan,” Fischer said. “Along with our existing partnership with WOWOW, the two deals announced continue to expand our media partnerships and consumer reach. Furthermore, the UFC is clearly building momentum in Japan toward finally bringing a live UFC event here for the first time in over a decade.”