The Performance Bonuses And Talking Points From A Historic Night In China
By Zac Pacleb • Aug. 31, 2019
FIGHT OF THE NIGHT: Alatengheili vs. Batgerel 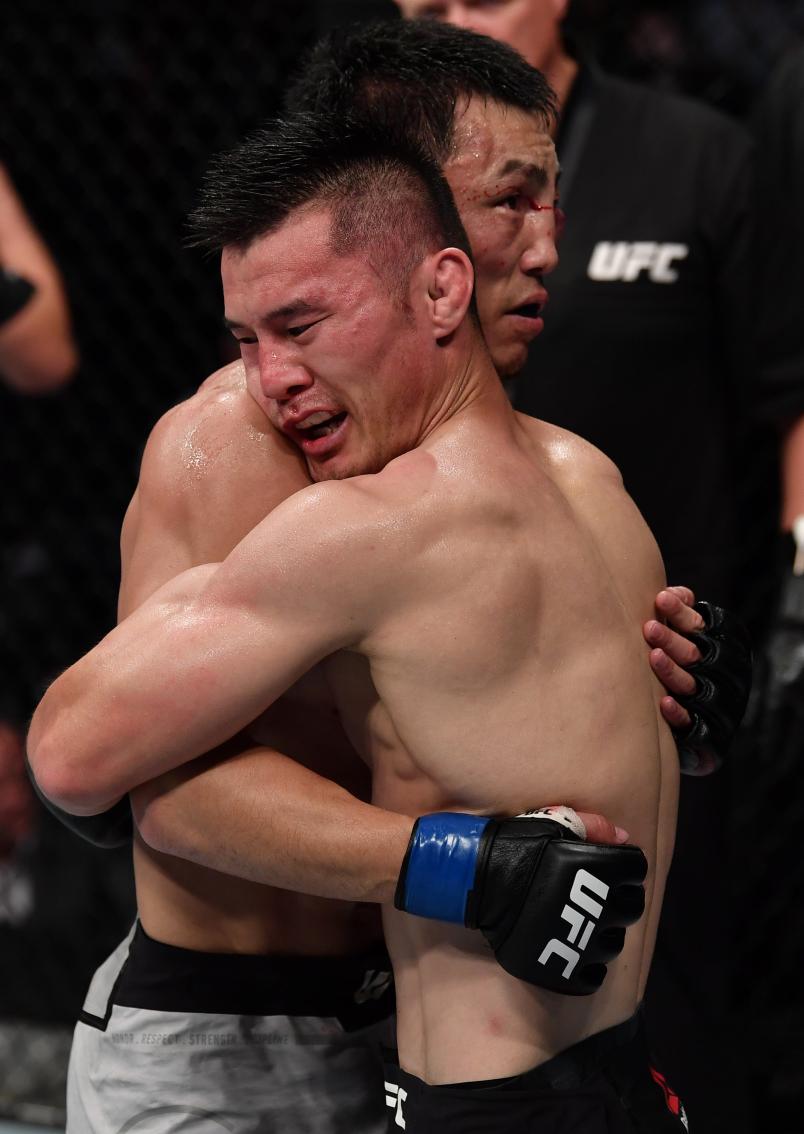 Danaa Batgerel of Mongolia and Alatengheili of China hug after their bantamweight bout during the UFC Fight Night event at Shenzhen Universiade Sports Centre on August 31, 2019 in Shenzhen, China. (Photo by Brandon Magnus/Zuffa LLC)

Though the fight started with plenty of distance-reading and feeling out each other, both fighters got busy quickly and often. Batgerel seemed like he got the upper-hand in the exchanges inside the pocket with his increasing volume and accuracy, but as the first round wore on, Alatengheili connected with a big right hand that sliced a cut open on his opponent’s nose.

The second round consisted of the same type of action, with Batgerel striking at range and countering while Alatengheili searched for a landing spot with a wild punch. It was Batgerel who switched things up and scored a takedown near the end of the round. In the final frame, Alatengheili stayed busy and upped the tempo, finding a home for his big punches. Midway through the last round, Alatengheili got his takedown. His top control lasted only for a moment, but he adjusted and kept the pressure on his opponent. Ultimately, it was enough for a win as well as enough for a $50,000 bonus.

When you secure the strawweight title in less than a minute’s worth of work, you deserve a Performance Bonus, and that’s exactly what Zhang Weili accomplished in her home country of China. The nation’s first UFC champion, Weili showed that she was more than capable of handling the powerful Jessica Andrade. When pressured, Weili showed composure and clinical savagery, connecting on a straight punch to rock Andrade, followed by several knees and elbows in the clinch. As “Magnum” poured it on, it was clear that tonight was just one of those nights where one fighter entered a different zone, and anyone who stood across from her would have had major trouble getting out of the first round. The result was a swarming finish, a back handspring, and history made for Zhang Weili, a name to remember for sure.

“The Leech” secured what is likely the biggest win of his UFC career against Elizeu Zaleski dos Santos with a late, third-round TKO.

The welterweights got after each other in their distinctive styles, with Jingliang eating shots to deliver bigger ones and dos Santos finding creative openings to rock his Chinese opponent. While they respected each other early, the fun really started once they opened up and started exchanging.

Jingliang found his range after dos Santos connected with some clean shots, and each time, fired back with a stronger or cleaner combination, including a round-stealing right hand toward the end of the first round. As the fight wore on, Jingliang dictated the pace and got the better of several exchanges. As dos Santos pressed the action to make up for what he believed was a deficit on the scorecards, Jingliang showed off impressive elusiveness and fight IQ to keep the Brazilian at bay. That is, however, until Jingliang uncorked a right uppercut that sent dos Santos stumbling toward the cage, and a flurry from Jingliang ended the fight before the final bell.