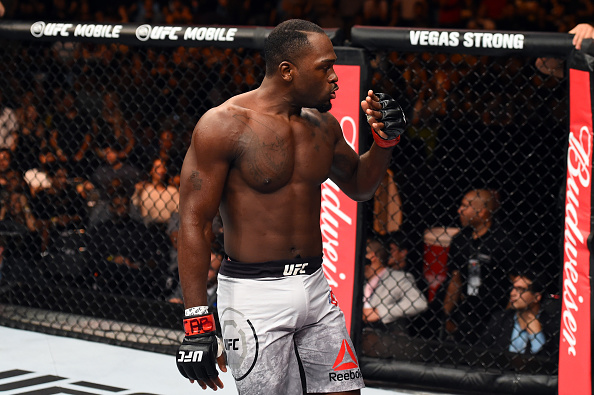 Derek Brunson reacts after defeating Lyoto Machida in Sao Paulo this past Saturday" align="center" />
Saturday’s UFC Sao Paulo event is in the books, and now that the dust has settled, it’s time to go to the scorecard to see who the big winners were at Ginásio do Ibirapuera.

1 – Derek Brunson
Before his win over Lyoto Machida, Derek Brunson told me his previous victory over Dan Kelly was the kind of win he needed to get back on track after consecutive losses to Robert Whittaker and Anderson Silva. I agreed at the time, but now I beg to differ, and it was his main event knockout of Machida that provided the win Brunson needed – not to get on track, but to prove that in the middleweight division, there are few fighters as dangerous as he is. At this point, he’s probably not next in line for a title shot, so I wouldn’t mind seeing him on a revenge tour, facing some of the guys who hold wins over him, like Jacare Souza or Yoel Romero. And given his recent form, those previous results could get upended in a hurry by the North Carolina native’s left hand.

2 – Colby Covington
Love him or hate him, odds are that you’re talking about Colby Covington this morning. Yes, he incensed all of Brazil with his post-fight comments, but when it comes to what happened in the Octagon, “Chaos” survived a nasty cut in the first round to put on a dominant performance against longtime contender Demian Maia. For those who said he was unproven on the elite level, Covington stepped up when his number was called and quieted some critics. The ones he didn’t, well, a lot of that skepticism probably has to do with his growing penchant for trash talk, but hey, you’re still talking about him, right? Then mission accomplished for CC.

3 – Pedro Munhoz
Maybe now people will start paying serious attention to Pedro Munhoz. Fresh from a guillotine choke submission over Rob Font, the bantamweight contender has to be creeping on to fight fans’ must watch lists. If not, why? He’s won four in a row, three by submission (with three Performance of the Night bonuses), and while his ground game is obviously top notch, he’s not afraid of getting his hands dirty in the standup game. “The Young Punisher” is the real deal.

4 – Vicente Luque
The 12-6-1 record of Vicente Luque may not be as pretty as some in the welterweight division, but a 5-2 Octagon slate is pretty impressive, and with all five of those wins coming by knockout or submission, it’s clear that we’ll be hearing his name for a long time to come. Simply put, Luque is getting better with each fight, and even after losses, he’s come back stronger. His finish of previously unbeaten Niko Price was as tight as performance as you’ll see, as he stuck to the basics and got the job done when the opportunity presented itself. Big win for “The Silent Assassin.”

5 – Elizeu Zaleski dos Santos
Before last Saturday’s bouts, I wrote that Elizeu Zaleski dos Santos is turning into one of my favorite fighters, and he didn’t disappoint against Max Griffin. An offensive machine with just enough openings on defense to make every bout a potential Fight of the Night, the Brazilian welterweight earned his third such bonus in Sao Paulo, and now it’s time to see him in with a top 15 170-pounder. Darren Till anyone?