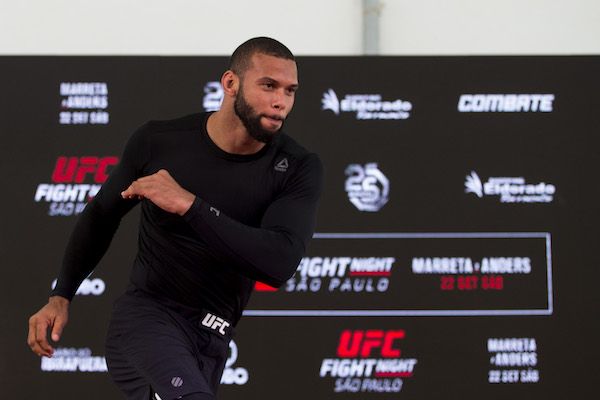 Same decisions, different processes. Thiago “Marreta” Santos and Luis Henrique “KLB”, are teammates at Tata Fight Team in Rio de Janeiro. Both fighters will be making their debuts at new weight classes at Saturday’s UFC Sao Paulo.
Santos will be moving up to face Eryk Anders in the main event and Henrique will be moving down from heavyweight to take Ryan Spann at 205 pounds.
“I didn’t have such a restricted diet and I’m in a better mood. Everything is better when you don’t have to starve,” said Santos about the difference in preparing to fight 20 pounds over what he was used to. “Another difference is in training. At middleweight, I was very debilitated in the weeks prior to a fight, I wasn’t able to train hard or spar, and this time I was.”

As for Henrique, the move down a weight class is for a different reason.
“I was a little overweight at heavyweight and there are guys who are natural heavyweights. Their bone structure is larger. That harmed me a little,” said Henrique. “I was a heavyweight for three years, I tried to become a heavyweight and a few injuries happened because of it. Now I’m at my natural weight class”.

Both Santos and Henrique had different reasons to make a division change, so it makes sense that each expect different advantages and disadvantages on Saturday.
“At middleweight, my disadvantage was the huge weight cut that debilitated me. Despite the fact we have 24 hours to recover, it was impossible for me to fight at 100%. The advantage for me at 205 is that I’m the same size or a little bigger than my opponents,” said Santos. “While at light heavyweight, the disadvantage is to be a little smaller than a real light heavyweight, but I’ll be a lot faster and hitting harder than I do at 185”.
“I’ll be a lot stronger than them,” said Henrique on the rest of the 205 pound division. “If you’ve trained with a heavyweight, you know the strength they have. The blow you take from a heavyweight is not the same in the lighter division.”
Henrique believes that this change in division will help bring back the golden years Brazilian fighters, such as Shogun Rua, had at light heavyweight. He believes his 2-3 run as a heavyweight was just the beginning and that he’s in store for big time Octagon success.
After fifth-ranked light heavyeweight Jimi Manuwa was injured six days prior to the event, Santos believes that no matter how his fight with Eryk Anders goes, he’ll give it at least another shot at 205.

“It’s not going to be the test I wanted. Despite hitting the 205 mark in one day and fighting the next one, which is new for me, I wanted to test myself against a real light heavyweight, a bigger guy like Manuwa, who hits harder and moves slower,” Santos said. “Now I’m fighting a middleweight like me, so it’s not going to be how I wanted. I still want to fight a real light heavyweight.”