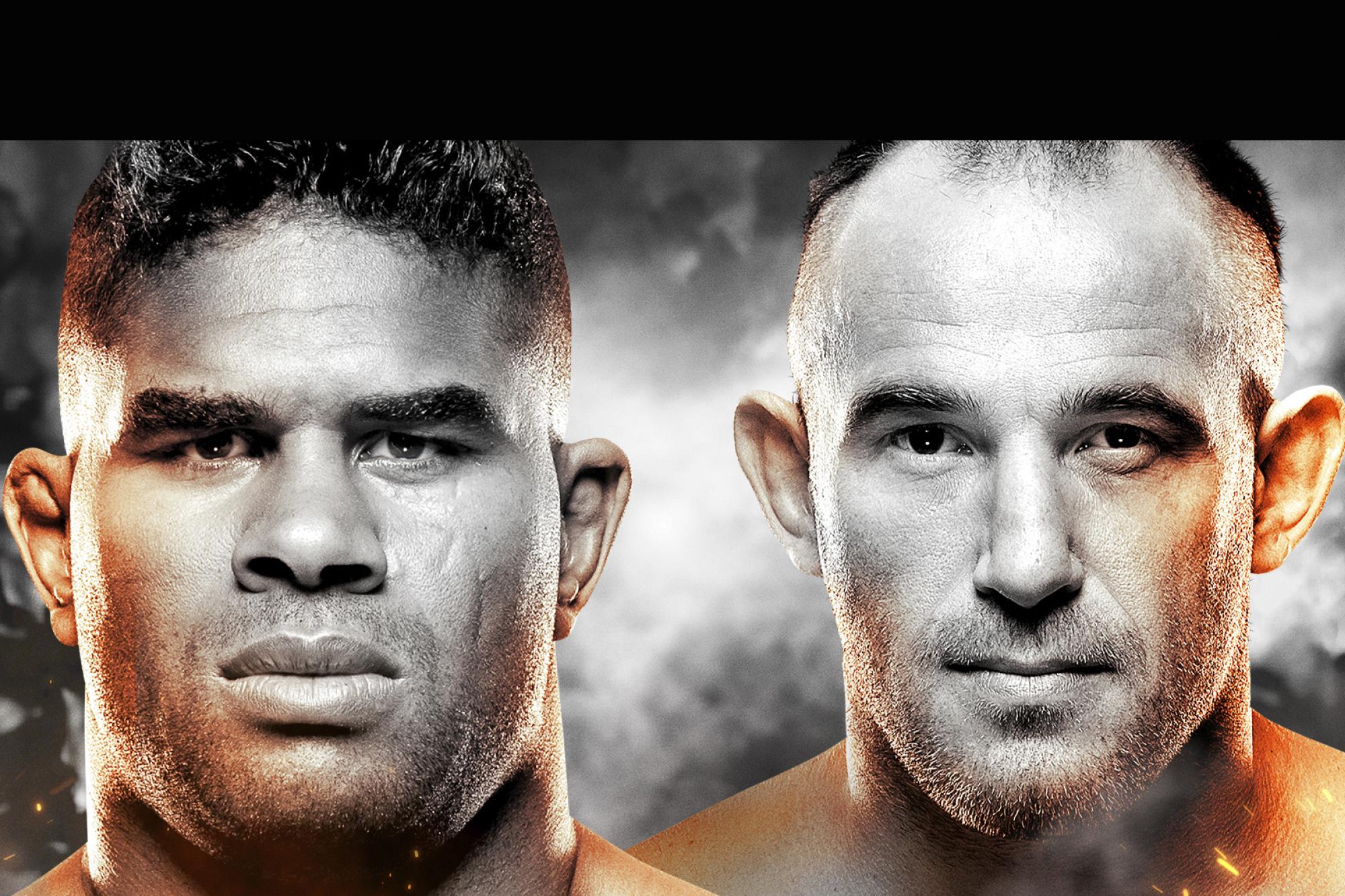 Check out the Top 5 finishes from fighter's featured on the UFC Saint Petersburg card.

After two years on the sidelines, Magomed Mustafaev returned to the Octagon in spectacular fashion, getting things started in Saint Petersburg with a first-round stoppage win over the previously unbeaten Fiziev.

Expected to be an all-action affair between the two well-rounded lightweights, Mustafaev came out of the gate looking to land something big, clipping Fiziev with a spinning wheel kick in the opening stages of the round. While the newcomer steadied himself, Mustafaev went back to the well one more time, blasting Fiziev with a spinning back kick upstairs that sent him stumbling to the canvas.

From there, Mustafaev pounced, unleashing a torrent of strikes that brought the fight to a close, giving the returning 30-year-old his first UFC victory in more than three years while elevating his record to 14-3 overall.

Michal Oleksiejczuk def. Gadzhimurad Antigulov by KO at 0:44 of Round 1

For the second time in two months, Michal Oleksiejczuk walked into the Octagon and made quick work of the man standing opposite him inside the UFC cage.

After earning a stoppage win over Gian Villante with a body kick in February, the 24-year-old Polish light heavyweight stepped in with Gadzhimurad Antigulov on Saturday in Saint Petersburg and handled business in even quicker fashion. While the Russian grappler pushed forward behind a lunging right hand that seemed to surprise Oleksiejczuk, the promising upstart responded with a clean left hand of his own that dropped Antigulov.

Each time Antigulov rose and resumed his pursuit, Oleksiejczuk found space and found a home for his left hand, dropping the over-aggressive grappler multiple times before following him to the ground and bringing the bout to a halt with one final flush left hand.

Social Post
Shamil Abdurakhimov def. Marcin Tybura by TKO at 3:15 of Round 2

Known for his grappling, Shamil Abdurakhimov showcased improved striking and a greater willingness to stand and trade on Saturday night in Saint Petersburg and it paid off with the most impressive victory of his UFC career, flooring Marcin Tybura midway through the middle stanza.

In the opening round, both Abdurakhimov and Tybura were happy to keep it standing and sling leather, with the Russian heavyweight getting the better of things early. Just as Tybura appeared to be gathering momentum in the second, Abdurakhimov intercepted him coming forward with a clubbing left hand to the temple that produced a delayed stagger from the Polish veteran.

Seeing he had Tybura on the ropes, Abdurakhimov swarmed, unleashing a series of follow-up strikes that left Tybura out on his feet, prompting referee Herb Dean to step in and stop the fight as he slowly collapsed to the canvas. With the victory, Abdurakhimov extends his winning streak to three, while Tybura falls to 4-4 inside the Octagon with the loss.

Alexander Yakovlev had to fight back tears inside the Octagon on Saturday after wrapping up a second-round submission win over newcomer Alex Da Silva.

Out of action since November 2016 and entering on a two-fight skid, Yakovlev returned to the lightweight division and picked up his first victory in more than three years by locking up a modified, arm-in guillotine choke midway through the middle round.

Da Silva and Yakovlev scrambled through the opening round, alternating takedowns, top control and time dictating the tempo of the fight along the fence over the first five minutes. After stumbling when he threw a kick early in the second, Yakovlev eventually reversed position and took the fight to the young Brazilian, stuffing a takedown against the cage before attacking with short, sharp punches and elbows, creating the opening he needed in order to clamp onto the fight-ending choke.

It took five fights, but the action in Saint Petersburg ventured into the third round for the first time on Saturday as the veteran welterweights went the distance in an entertaining clash the culminated with Aliev getting his hand raised in the center of the Octagon.

Early in the fight, the 34-year-old Russian, who trains out of American Top Team in Coconut Creek, Florida, showcased the boxing he’s been working diligently on, stinging Nakamura and causing him to stumble. From there, Aliev returned to his roots, utilizing his strength in the clinch and control in the grappling department to grind out a clean sweep of the scorecards.

Returning after just shy of a year on the sidelines, Aliev pushed his record to 15-3 overall with the victory, drawing level at two up and two down inside the UFC cage, while Japan’s “K-Taro” slipped to 34-10-2 for his career and 4-4 during his second stint competing in the Octagon.

The final scorecards don’t quite paint a complete picture of how dominant Mosvar Evloev was in this contest as the Russian newcomer effectively suffocated fellow first-timer Seungwoo Choi from start to finish.

While Choi landed a few quality shots across the three-round affair, the majority of the fight was contested on Evloev’s terms, as the former M-1 Challenge bantamweight piled up more than two rounds worth of control time while constantly pressuring and punishing his South Korean counterpart en route to a sweep of the scorecards. The only reason Evloev didn’t collect 30s across the board was that he lost a point in the middle stanza after connecting with an illegal knee while Choi was considered a downed fighter.

Showcasing a relentless pace and excellent transitional wrestling, the undefeated 25-year-old rarely gave Choi a chance to breathe. Evloev stayed on him from start to finish, securing a dominant win in his promotional debut, pushing his record to 11-0 in the process, while handing Choi the second loss of his professional career.

Early in the fight, Jotko used his length and superior footwork to effectively strike with the compact powerhouse Amendovski, connecting with a picturesque spinning back elbow that landed between the debuting fighter’s eyes, yet only sent him down to a single knee. From that point forward, the Polish veteran deployed a smart, smothering attack, putting Amendovski on the canvas and punishing him with punches and elbows from top position.

In every round, Jotko secured clean takedowns and advanced to side control, attacking from the crucifix position and leaving the previously unbeaten neophyte busted up. The judges recognized Jotko’s dominance, doling out a collection of 10-8 scores that produced lopsided totals on the scorecards when it was all said and done.

If you ever want to know why analysts and broadcasters put such emphasis on where a bout takes place, this fight is a perfect example as the two specialists excelled in their respective domains while combining to make the first UFC fight between female competitors in Russia an entertaining three-round affair.

When the fight was standing and Shevchenko was able to operate in space, she picked apart Modafferi, countering her advances with clean, precise shots that stung the seasoned veteran. But as soon as Modafferi was able to initiate the clinch and drag the fight to the canvas, “The Happy Warrior” controlled the action, constantly working to dominant positions and peppering Shevchenko with strikes.

Although Shevchenko came out guns blazing to start the third, Modafferi was able to weather the early storm, get the fight to the ground and go on the offensive. After the tens and nines were tallied, it was the veteran Modafferi who landed on the happy side of the split decision verdict.

Social Post
Sergei Pavlovich def. Marcelo Golm by KO at 1:06 of Round 1

Sergei Pavlovich’s UFC debut came last November in Beijing, China against Alistair Overeem and resulted in his first professional loss. Heading into his homecoming in Saint Petersburg, the Russian heavyweight wanted to rebound with an impressive performance and he did just that, snuffing out Brazilian Marcelo Golm in just over a minute.

Golm charged across the cage at the outset, looking to close the distance and nullify Pavlovich’s sizeable reach advantage, but instead, he ended up trading in the pocket with the hulking powerhouse and ended up paying the price. After stinging Golm and backing him up towards the fence, Pavlovich touched up the Brazilian with a couple shorter blows before uncorking an overhand right with an uppercut behind it that felled Golm and brought the fight to an end.

In a division where a couple impressive performances can put you in the thick of the chase, this was the precise type of bounce-back performance Pavlovich was looking for, as he picks up his first UFC victory and the 12th win of his career.

Islam Makhachev ran his winning streak to five, but Arman Tsarukyan certainly made him work for it, earning top marks for the spirited effort he turned in against the surging lightweight contender in his first foray into the Octagon.

To everyone’s surprise, perhaps even Makhachev, it was Tsarukyan who sought the first takedown and initiated the clinch to start, showing that he was willing to grapple. While Makhachev responded by hitting a deft foot sweep and floating right into mount, Tsarukyan remained patient, worked free and continued to go shot-for-shot with the once-beaten upstart from Dagestan.

As the bout hit the third and final round, Makhachev was able to pull away, continuing to push a relentless pace and swarm Tsarukyan. Although he was unable to find a finish, Makhachev showed his ability to go hard for 15 minutes and scored his fifth straight victory in the ultra-competitive lightweight division.

Social Post
Alistair Overeem def. Aleksei Oleinik by TKO at 4:45 of Round 1

Last time out, Alistair Overeem snapped a two-fight skid with a first-round stoppage win in Beijing. This time, the veteran heavyweight drew closer to contention as he finished Aleksei Oleinik in the closing seconds of the opening round of their main event clash in Saint Petersburg.

Just 10 seconds into the fight, Oleinik pulled guard and looked to set up his trademark Ezekiel choke, but Overeem was hip to what was happening and wisely got back to his feet. But even when the bout was being contested on his preferred terms, Oleinik was the aggressor, pressing forward behind looping hooks and constant body shots once he got in close.

But Overeem did an excellent job of covering up and picking his spots, attacking with an assortment of knees. Though Oleinik managed to absorb a number of the vaunted kickboxer’s attacks, Overeem turned up the pace late in the round, forcing the Russian veteran’s head into one more powerful knee that put him on the canvas, where the Dutch superstar put him away with precise, measured ground-and-pound in the closing seconds of the first.

With the victory, Oveereem pushed his record to an incredible 45-17, while Oleinik fell to 57-12-1 with the loss.