UFC RIO is in the books...Michael DiSanto breaks it down... 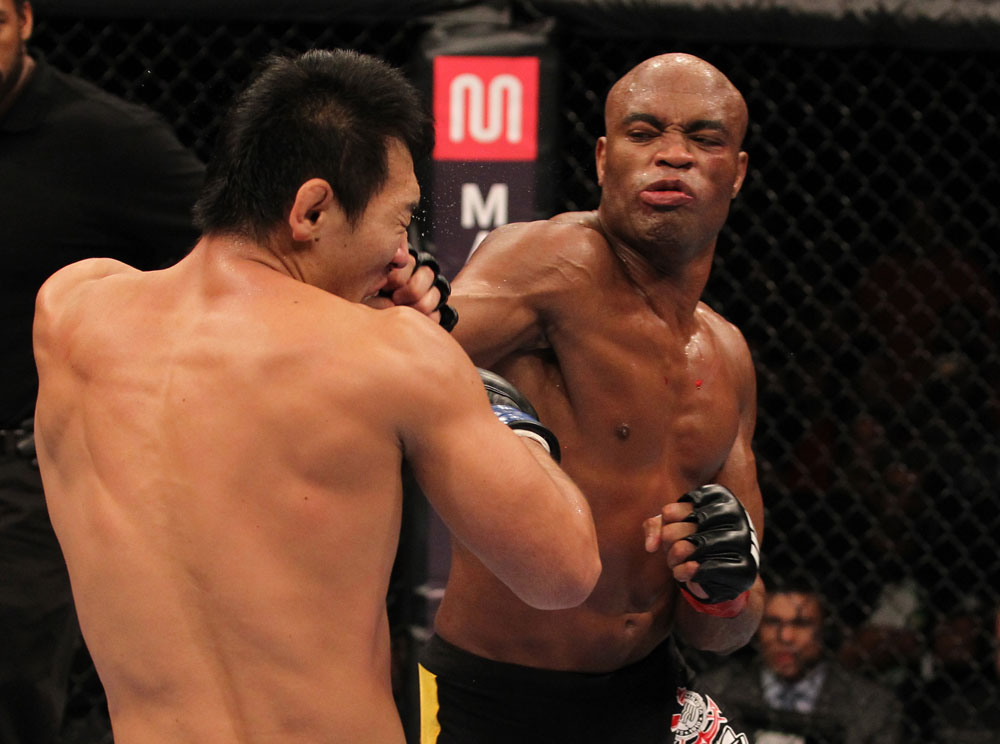 Talk about a homecoming party.

For only the second time in the promotion’s history, the UFC held an event in the homeland of mixed martial arts, Rio De Janeiro, Brazil. The televised portion of the event featured seven bouts with Brazilians against “others.” The hometown heroes went an impressive 6-1 in those fights, with Luiz Cane being the sole fighter to come up short. And the card’s three biggest names made deafening statements to the MMA world with their performances.

SILVA CONTINUES STAKING HIS CLAIM AS THE BEST IN THE SPORT

No disrespect to Georges St-Pierre, but there is absolutely no question as to who is the greatest fighter in the world, pound for pound. Anderson Silva stands head and shoulders above everyone else. The brutal knockout win over Yushin Okami is further affirmation of that fact.

Sure, Silva has had a few sleepy performances. See Patrick Cote. Demian Maia. Thales Leites. But his last three were among the most impressive of his career, further building his lore of invincibility.

Chael Sonnen, arguably the best wrestler in the middleweight division, controlled an injured Silva into the fifth round. He was less than two minutes from winning the fight, when Silva forced him to accept a loss thanks to a miracle triangle choke.

Vitor Belfort, certainly the best striker in the division, other than Silva, got brutally knocked out with a front kick, of all things. That is a strike that nobody uses with any real effectiveness, other than Silva and Lyoto Machida. Yet, it left Belfort lying in an unconscious heap.

Okami, possibly the biggest and strongest competitor in the division, had all the tools to follow in Sonnen’s footsteps and put Silva on his back for long periods of time. Silva learned from the Sonnen fight. He used more lateral movement and did not wait to counter, like he did against Sonnen. He forced the action, once he got comfortable with what Okami brought to the table and scored a knockout win as a result.

In other words, he continues to adapt and improve. That is a scary thought for future opponents. At this point, it is tough to imagine Silva losing a middleweight bout, unless he lost focus and motivation, both of which are very real possibilities when one considers that that no credible new challenges remain for him at 185 pounds.

Sure, a rematch with Sonnen would be both a dangerous and intriguing matchup, since he is the lone man to come even remotely close to defeating Silva in the UFC. A rematch with Belfort would create tremendous fireworks. A rematch with free agent Dan Henderson might be the most dangerous option of them all, based on Hendo’s last two performances.

But those are all rematches. I can easily imagine Silva struggling to find motivation to face guys he has already stopped in the past. That is why he now talks about wanting nothing but big fights. Big fights present tough challenges and also rich rewards, both financially and in terms of building his already sick legacy in the sport.

What constitutes a big fight? A bout with GSP clearly qualifies. I don't know if that bout will be happening, though, considering the size disadvantage GSP will be facing. And though Silva has shown a susceptibility to takedowns in his bouts with Hendo, Sonnen and Travis Lutter, absent repeated takedowns, GSP would not likely leave the cage without a knockout loss on his record. Yet, if GSP is somehow able to score a victory, it would be crushing to Silva’s legacy—history does not often fondly remember those who lose to smaller men.  Boxing teaches us that truism.

A fight with the winner of Jon Jones and Rampage Jackson is certainly a monstrous challenge. Nobody in UFC history has ever simultaneously held championships in two weight classes. Silva seems to be the best positioned to accomplish that goal, if he wants to move north.

Gaining weight for a 205-pound challenge is not without risk. Would doing that make it too difficult for him to get his weight back down to 185 pounds for future middleweight fights, if the plan was to rule both divisions at once? Think about what happened to Roy Jones Jr. in boxing when he tried returning to light heavyweight after winning boxing’s version of the world heavyweight championship.  Silva must consider that fact.

There are other big matchups, too. The UFC’s 205-pound division is filled with marquee fighters. Silva’s last two forays into the division were non-title affairs against tough, durable opponents. At this point in his career, I doubt that Silva would take a non-title fight against a bigger foe. The risk just isn’t worth the reward because a win wouldn’t necessarily improve his legacy.

The only exception to that could be a post-retirement bout with Randy Couture, who is the most decorated champion in UFC history, in terms of number of reigns. I can see Silva readily agreeing to a bout with Couture.

Then again, there is always the option of continuing to dominate middleweight contenders. Brian Stann is a likely challenger, if he can get past Sonnen in their upcoming bout on October 6 in Houston. Then, there is Michael Bisping, if he can get past Jason Miller. Mark Munoz is another viable name, assuming he defeats Chris Leben on November 5 in Birmingham, England.

But it is tough to imagine any of those guys overthrowing Silva as the division kingpin.

It will be interesting to see what is next for “The Spider.”

THAT WAS THE BEST NOGUEIRA SINCE HIS PRIDE DAYS

Antonio Rodrigo Nogueira is a legend in the sport. But after getting knocked out in two of his last three fights leading up to UFC RIO, many thought that “Minotauro” was on the downside of his legendary career. It was a fair assumption, too. At 35 years old, he certainly remains in his fighting prime in terms of age, but the dozens of back-and-forth wars he has engaged in over the last decade-plus have put a ton of excess mileage on his body.

The question, of course, was whether that excess mileage was prematurely eroding his skills.

Minotauro emphatically answered that question on Saturday night. His first-round knockout win over Brendan Schaub proved that he has plenty of gas left in the tank (and an extra $100,000 in his pocket thanks to a Knockout of the Night bonus).

I certainly thought Minotauro had a great shot at winning the fight. But I never thought that it would end the way that it did. First-round submission? Absolutely. First-round knockout? Not in a million years.

It is no secret that Minotauro is an excellent boxer. The world has known that for years going back to his PRIDE days. Schaub is also a skilled boxer in his own right, one who competes with far more quickness and athleticism than the former heavyweight champion. Many thought those advantages would be too great for Minotauro to overcome if the fight remained on the feet.

Minotauro reminded the world that game plan and execution are more important in this game than pure athleticism. The former champion was able to effectively use his jab and constant pressure to keep Schaub defending, rather than attacking, particularly toward the end of the fight. He also used great footwork to cut off the cage when Schaub tried to retreat, and once Schaub’s back hit the cage, Minotauro let his hands go with hard combinations that led to the fastest knockout of his storied career.

Young fighters should take note at how Minotauro nullified Schaub’s hand and foot speed advantages with those techniques because it was a masterful performance by the former champion.

Saturday night proved that when Minotauro is completely injury-free he is a force to be reckoned with in the heavyweight division.  It will be interesting to see how things shake out with him over the next year if he can remain healthy. I wouldn’t put another title run past him. Not after what I saw on Saturday night.

A TALE OF TWO SHOGUNS

Mauricio “Shogun” Rua has been a bit of an enigma since joining the UFC. At times, he appears almost unbeatable. At times, he seems remarkably human.

Those differences appear to be tied to the health of his balky knees. He has had a series of knee surgeries since joining the UFC in late 2007, and the injured and immediately post-surgery versions of Rua are a far cry from the healthy, berserker version.  The former got hammered by Forrest Griffin over the course of three rounds. The latter stopped Griffin with strikes in less than two minutes.

Now, that is a stark difference, one that has to have fans wondering whether Shogun’s performance in his title-losing effort to Jon Jones can be chalked up to post-surgery cage rust or if the matchup is really that bad for him.

Shogun is very open about the fact that he wants, and likely believes that he deserves, a quick return in a title bout. Rashad Evans might have a thing or two to say about that.

But whoever Shogun fights, staying healthy is the key to this guy returning to the top and staying there. He certainly has the skills to be not only a champion, but a dominant champion.

Griffin is honest to a fault. Ask a question and you will receive an honest, unfiltered answer. That is one of the reasons why he is such a lovable figure in the sport. Well, that and his willingness to walk through fire during competition without ever considering quitting.

Griffin’s pre-event blog was filled with talk about his lack of motivation. The guy who used to sleep on a friend’s floor is now wealthy, thanks to a sport he helped build with his blood, sweat and guts. And as many fistic champions have said before him, it is tough to get up every day and put themselves through the tortures of a proper training camp when they go to bed at night with silk pajamas.

I’m sure Griffin properly prepared for Shogun. It would shock me if one of the sport’s hardest workers cut any corners in his preparation. Yet, he was very honest in the weeks leading up to the fight that, in his opinion, he was not improving anymore. He wasn’t growing as a mixed martial artist. There is no place for self doubt in MMA. If Griffin was questioning the adequacy of his preparations before facing Shogun, getting knocked out in less than two minutes will greatly exacerbate those concerns.

Griffin said that he wants to continue fighting so that he can provide for his extended family. If that is the case, then he needs to use that to rekindle the competitive fire in his belly. If that won’t get it done, then he needs to find motivation somewhere because many fights are won or lost long before the combatants actually step into the cage.

Griffin seemed tentative to me in the fight. Maybe self doubt led to that tentativeness. Facing a savage striker like Shogun also probably had something to do with it, though Griffin has never really showed tentativeness in the past, even against arguably an even more dangerous striker in Rampage.

Maybe changing up his camp is the answer. Training with new guys may bring a fresh, new feeling to the fight game, something that he openly admits has been absent for the last few years.