Last year may have marked the first time the UFC Octagon touched down in the Philippines, but the island nation has a rich and robust history with martial arts and combat sports.

Whether you call it Arnis, Eskrima or Kali, the martial art of the Philippines is a style that centers on fighting with sticks, knives and bladed weapons, but also incorporates joint locks, grappling and hand-to-hand combat. Two MMA notables with experience and training in the country’s national sport include former middleweight champion Anderson Silva and famed coach Erik Paulson, both of whom learned under the legendary Dan Inosanto.

On October 1, 1975, one of the most famous fights in boxing history took place in the country’s capital city, as Muhammad Ali and Joe Frazier concluded their epic trilogy with “The Thrilla in Manila.” While the bout technically took place in Quezon City, it’s much harder to find something catchy that rhymes with Quezon City, and those minor details don’t particularly matter when it comes to this classic rubber match.

Frazier got the nod in their first encounter, which was hailed as “The Fight of the Century,” as it marked the first time two boxers with undefeated records collided for the heavyweight title. Just under three years later and back at Madison Square Garden, Ali leveled the series at one with his own unanimous decision victory, setting up their “winner take all” encounter in the Philippines.

Ali was a couple of wins removed from his “Rumble in the Jungle” win over George Foreman, while Frazier had picked up TKO finishes over Jerry Quarry and Jimmy Ellis before stepping in with Ali for a third time.

Hyped to the hilt, the bout somehow managed to exceed expectations, with the two greats going back-and-forth for 14 rounds before Frazier’s trainer, Eddie Futch, stopped the fight, much to his charge’s frustration. Little did Futch know that across the ring, Ali had instructed his trainer, Angelo Dundee, to cut off his gloves, with Dundee opting to ignore Ali’s request.

Not only did the country play host to one of the greatest fights of all time, but it also produced one of the Top 10 fighters of the last 25 years, multi-time, multi-division world champion Manny Pacquiao.

After amassing a 32-2 record and collecting a couple of belts, Pacquiao’s sixth-round TKO win over Lehlo Ledwaba in June 2001 made people in the boxing community sit up and take notice of the quick, powerful Filipino fighter. Two years later, his clash with Marco Antonio Barrera kicked off a stretch of fights that would elevate “Pacman” to superstar status in the boxing world.

Following his unanimous decision victory over Timothy Bradley in their trilogy bout in April, the 37-year-old southpaw said he was hanging up his gloves, but like many combat sports veterans, he’s had a change of heart and is expected to return to the ring later this year.

With such a rich history, it was no surprise that the UFC would eventually make its way to the Philippines, and on Oct. 15, the UFC will return to the Mall of Asia Arena in Manila for its second event, hoping to build off the tremendous success of last year’s Filipino debut. 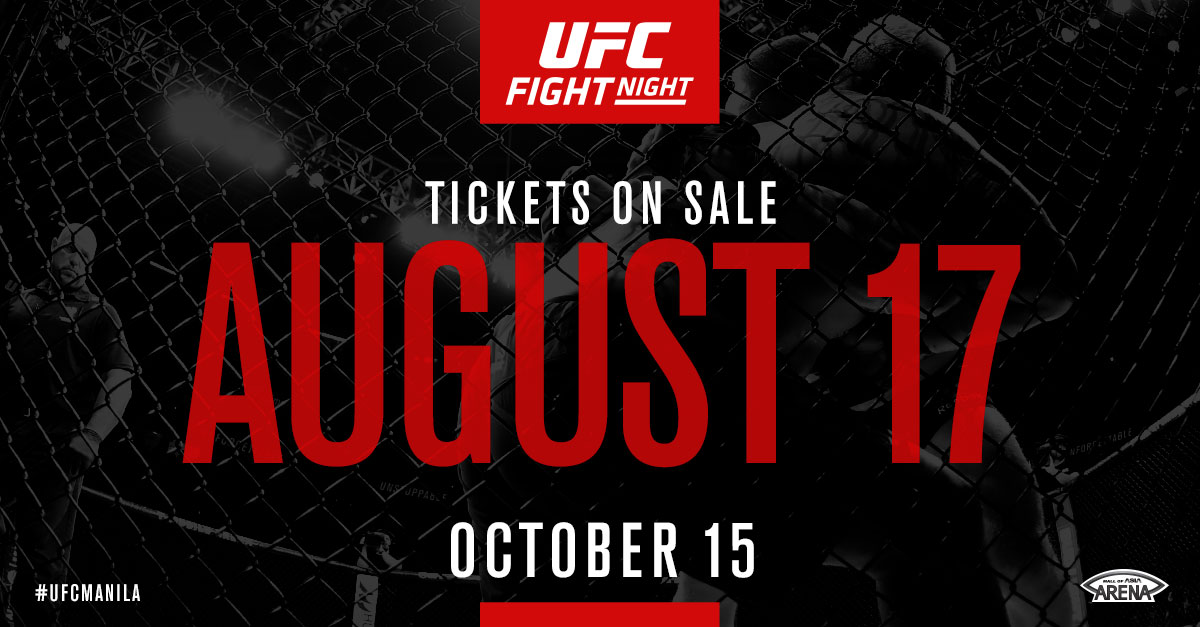 Headlined by a highly anticipated clash between Frankie Edgar and Urijah Faber, the more than 13,000 people in attendance witnessed a wildly entertaining night of fights, featuring strong performances from local fighters Mark Eddiva and Roldan Sangcha-an, who combined with Jon Delos Reyes to earn Fight of the Night honors.

While the night was filled with strong performances and capped by Edgar orchestrating a technical striking symphony against Faber in the main event, the biggest moment of the night came when proud Filipino-American Mark Munoz picked up a unanimous decision victory over Luke Barnatt in his final Octagon appearance.

A two-time All-American and 2001 NCAA National Champion wrestler at Oklahoma State University, “The Filipino Wrecking Machine” was a perennial contender in the middleweight division during his prime and goes down in the UFC history books, having taken part in the first-ever non-title against Chris Leben at UFC 138 in Birmingham, England.

Whenever the talk of a UFC event in the Philippines came up, Munoz was quick to express interest in taking part in the show and flourished when given the chance to close out his career in front of the Filipino audience before delivering a heartfelt, tearful post-fight speech in the Octagon.