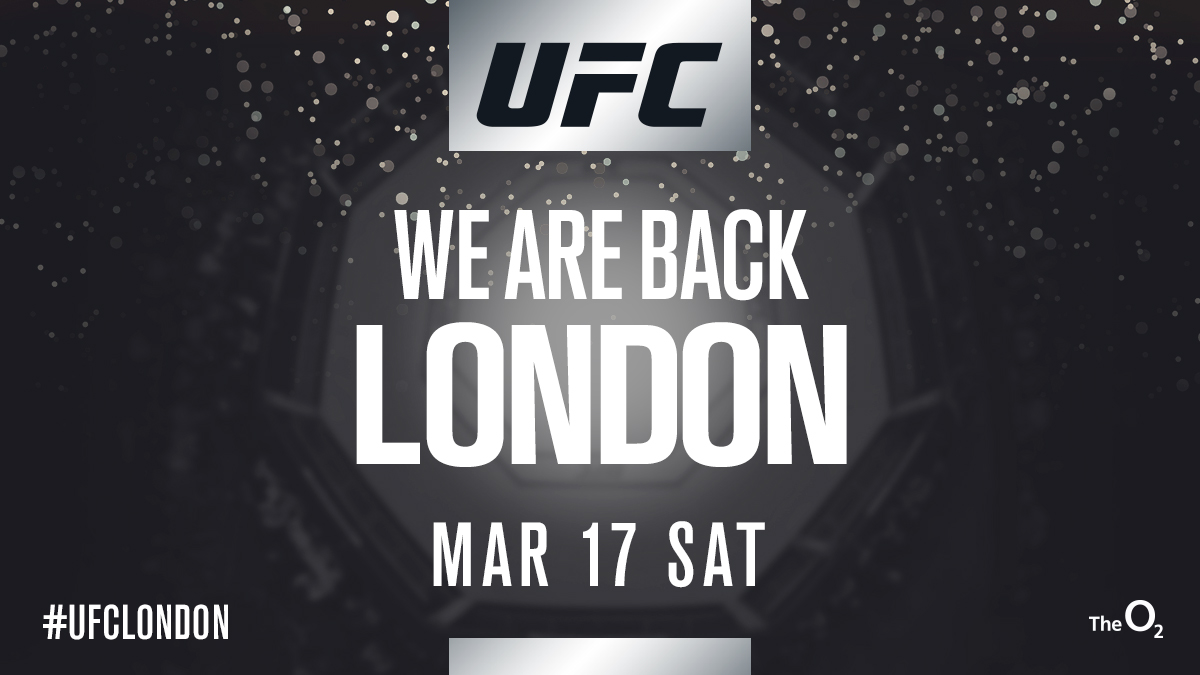 The event will take place on Saturday March 17, 2018 at The O2 and will mark the organisation’s tenth live event in the English capital.

Tickets to UFC FIGHT NIGHT® LONDON are set to go on general sale on Friday, February 2, 2018 at 10 a.m. GMT via AXS and Ticketmaster.

UFC first arrived in London back in July 2002 when it hosted UFC 38, an event which firmly placed the sport of MMA on the map for British fans. Since then, a further eight events have been held in the city, with more than 120,000 passionate fans turning out to witness some of the world’s greatest fighters step into the UFC Octagon®.

London has played host to countless memorable moments in UFC history over the years, including Carlos Condit’s unforgettable knockout of Dan Hardy back in October 2010, Michael Bisping’s stunning defeat of the legendary Anderson “The Spider” Silva in February 2016 and, most recently, local hero Brad “One Punch” Pickett’s emotional farewell to the sport in front of his home crowd.

UFC’s most recent trip to London in March of this year sold out in just 27 minutes and was watched by thousands of people all over the world. Since then, fight fans across the UK have been patiently waiting for the organisation to announce its return.

UFC FIGHT NIGHT® LONDON is set to deliver yet another highly-charged night of live MMA action featuring a fight card stacked with homegrown and international talent.

UFC Senior Vice President, International and Content, David Shaw said: “London is always a landmark event for UFC; the fights, fans and city itself always deliver. To see how the organisation has grown from the first event at The Albert Hall in 2002 is incredible. Our dedicated fans have helped us grow the sport in the UK to where it is today and we are delighted to bring our 10th event to London. 2018 will be an exciting year for UFC in EMEA and we will certainly be kicking things off in style in March.”

Fans are advised to register their interest via this link ufc.com/london and to follow @UFCEurope on Twitter for all the latest updates on UFC FIGHT NIGHT® LONDON.