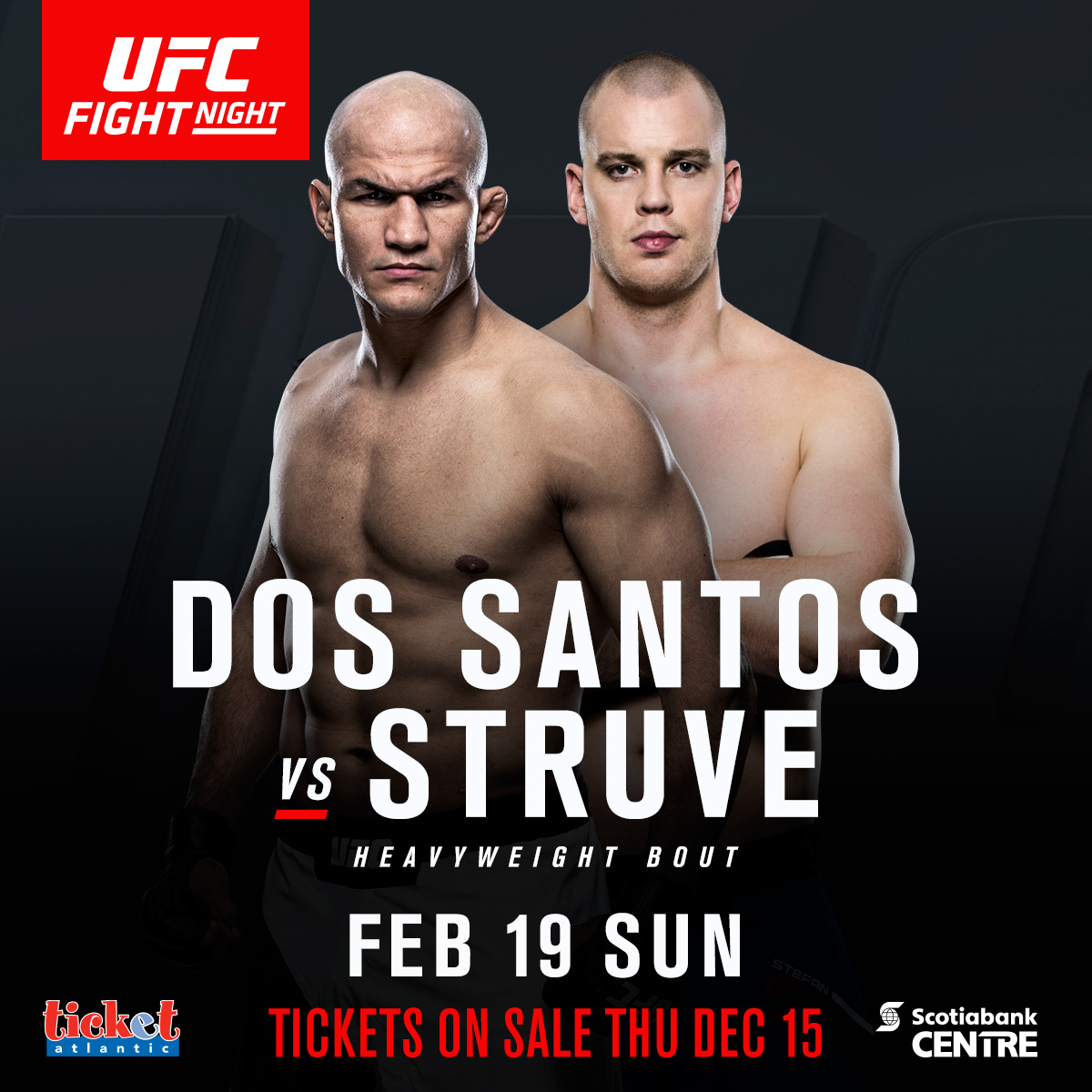 Halifax, Canada – UFC® makes its highly anticipated return to Atlantic Canada on Sunday, February 19, 2017 at Scotiabank Centre in Halifax as a pivotal heavyweight fight between No.4 Junior Dos Santos and No.11 Stefan Struve headlines the card. Additional bouts for UFC FIGHT NIGHT®: DOS SANTOS vs. STRUVE 2 will be announced in the coming days and weeks.

A lot has happened since heavyweight standouts Junior Dos Santos (18-4, fighting out of Salvador, Bahia, Brazil) and Stefan Struve (32-8, fighting out of Beverwijk, The Netherlands) first met in 2009. Now, on February 19 in Halifax, the two are on a collision course to the top of the division, with former world champion Dos Santos eager to repeat his first victory, while Struve seeks redemption on the way to his first world title shot.

Dos Santos owns 13 wins by KO and one by submission. He has won 13 of his last 16 bouts, earning a unanimous decision win over Ben Rothwell in April during his most recent outing. The power-punching “Cigano,” who has delivered two fight-of-the-night and three knockout-of-the night performances over his decorated UFC career, is hungry to get back in the title picture and regain the belt.

Standing in his way is Struve, who has won seven of his last 10 bouts. Struve earned his sixth performance bonus for his first round KO of Antonio Silva in May, and followed that up with a second round submission over Daniel Omielanczuk at UFC 204 in October. The “Skyscraper” will look to utilize his size, kickboxing and slick submission game against Dos Santos to continue his climb up the heavyweight rankings.

For the latest card information or current fight news, please visit www.ufc.com. All bouts live and subject to change.

“We are so excited to bring the Octagon® back to Canada’s east coast. We created an electric atmosphere here in 2014 with over 10,000 fans packed into Scotiabank Centre,” said Joe Carr, UFC Senior Vice President, International. “We look to continue our momentum in Halifax after delivering a sold-out UFC 206 in Toronto last weekend.”

"We are delighted to welcome the UFC back to Atlantic Canada for the second time," said Carrie Cussons, acting president and CEO of Trade Centre Limited, the Crown corporation that manages Scotiabank Centre. "As host to organizers, fans, and some of the world’s greatest athletes, Halifax’s renowned hospitality will surely make 2017’s event a memorable experience for all."