The third edition of Abu Dhabi Showdown Week will once again feature a week of activities held around the city
Mar. 18, 2022

Register Your Interest for UFC 281

With UFC® hosting the first full-capacity event internationally in London this week, the return to Abu Dhabi continues the organization’s event expansion following the pandemic. UFC 281 will be a blockbuster event, including a crowd-pleasing title bout. Fans are encouraged to register their interest here to receive early access tickets, news, and event information regarding the range of events taking place during Abu Dhabi Showdown Week.

Whilst Abu Dhabi has been the home to international UFC events over the pandemic, UFC 281 will mark the first time events and activations can return in full form in the emirate since UFC 242: KHABIB vs POIRIER in September 2019. The third Abu Dhabi Showdown Week will host events such as concerts, workshops, pool parties and city-wide activations featuring some of the biggest UFC stars.

"I can't wait to bring another event back to Abu Dhabi" said UFC President Dana White. "Every time we go there the events get bigger and better, and this year we are going all out and bringing back Abu Dhabi Showdown Week in addition to more incredible fights. Fans are not going to want to miss this one." 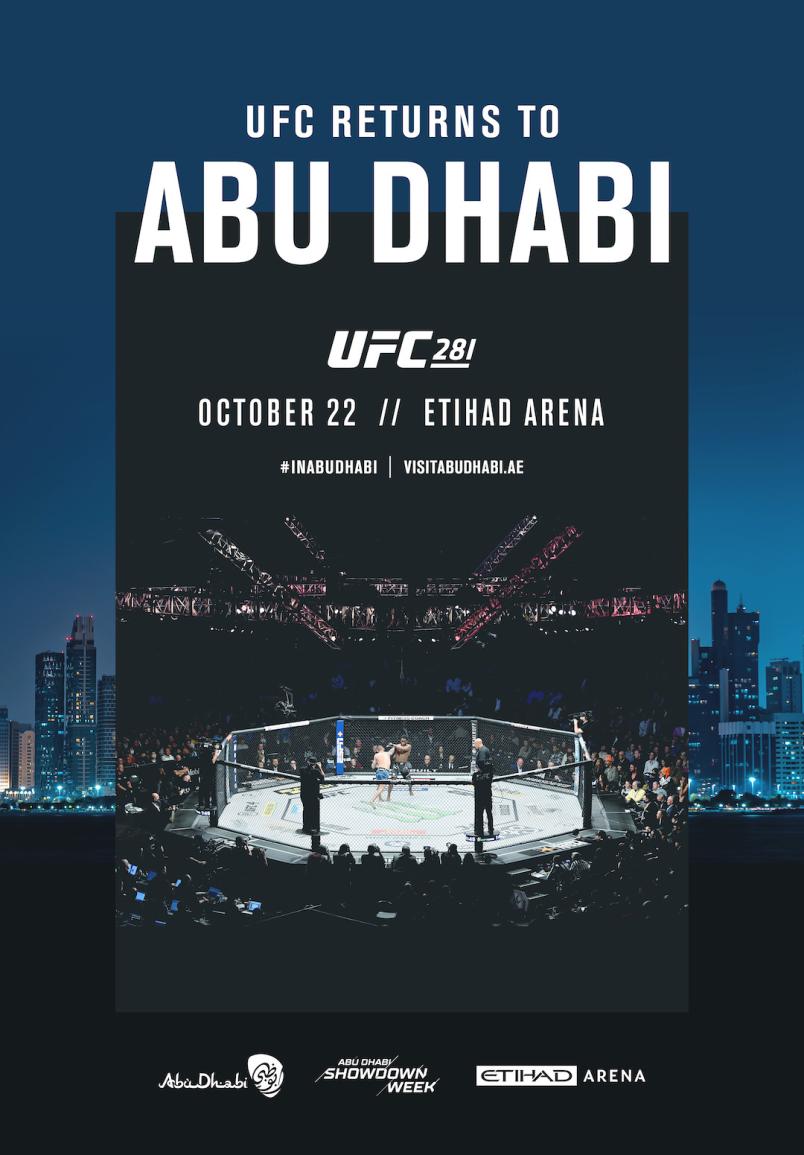 Fatima Al Baloushi, Acting Director of Abu Dhabi Events Bureau, Department of Culture and Tourism - Abu Dhabi (DCT Abu Dhabi), said: “UFC and Abu Dhabi Showdown Week are massively popular and almost permanent fixtures on our Abu Dhabi Calendar. We strive to deliver the world's best fighters and we are excited to bring yet another thrilling title bout to Abu Dhabi in October. We look forward to welcoming fans from around the world and showing them why Abu Dhabi is the ultimate UFC destination.”

UFC 267: BLACHOWICZ vs TEIXEIRA in October 2021 was the organization’s first event with expanded fan capacity in the new, state of the art Etihad Arena on Yas Island. Earlier in 2021, the venue hosted UFC 257 events as part of the third instalment of the world-renowned Fight Island series, with a limited fan capacity.

UFC 281 will mark the promotion’s 17th overall event in Abu Dhabi, dating back to UFC 112: INVINCIBLE in April 2010. During this time, Abu Dhabi has hosted nine title fights with three new champions crowned.

Further information, including bouts, tickets, and travel packages, will be released in due course.