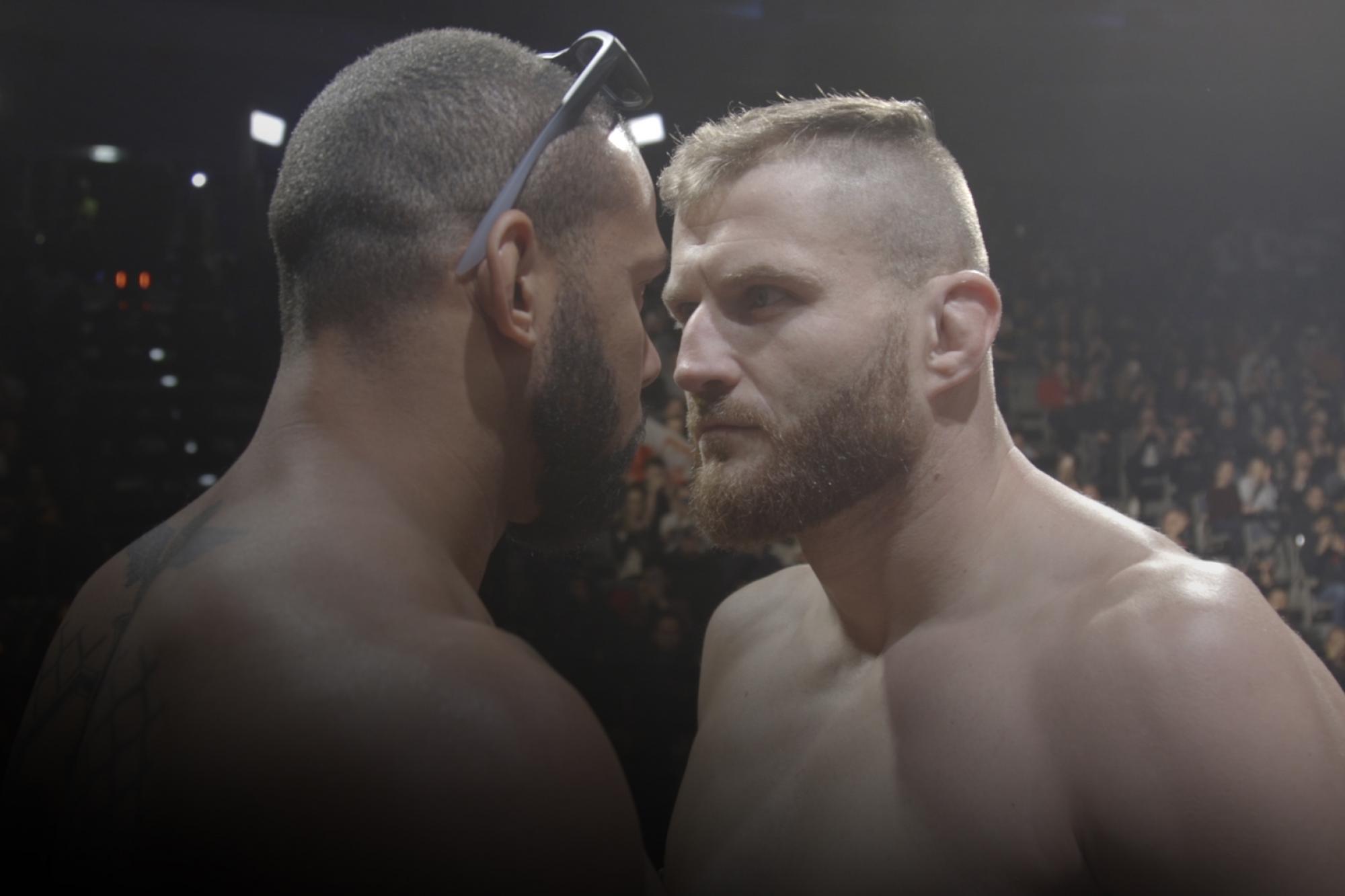 Submission specialist Alvarez seemed content to keep the fight on the feet in the opening round, a prospect that sat just fine with Ismagulov, who landed several hard right hands and mixed in a few left hooks as well over the course of a solid five minutes.

There was no change to the pattern in rounds two and three, with the fight remaining on the feet as Ismagulov continued to control matters. There was no sense of urgency from either fighter in the final frame, and no drama on the scorecards, which all read 30-27 in favor of Russia’s Ismagulov, now 18-2. Spain’s Alvarez falls to 15-2.

The Main Card Is Coming Up Only On ESPN+ Start Your Free Trial Now!

Ferreira was the busier and more effective striker in the first round, and while Khabilov was able to get his foe to the mat a couple times, the only instance where the fight stayed there was in the closing stages of the frame, when Ferreira reversed position and nearly sunk in a rear naked choke before the horn intervened.

The fight remained competitive in the second, and while a pair of quick takedowns by Khabilov made things a lot closer, in the third, Ferreira left no doubt with his striking attack as he rocked Khabilov late and secured the victory by scores of 30-27 twice and 29-28.

Octagon newcomer Ismail Naurdiev made quite the impression in his debut, as he halted the eight-fight winning streak of Brazilian veteran Michel Prazeres.

Prazeres made no secret of his game plan as the bout began, as he immediately sought a takedown, but Naurdiev defended well and then drew first blood with a kick to the head that rocked the Brazilian. Prazeres used this moment to get a takedown, but it was “The Austrian Wonderboy” who reversed position and delivered some solid ground strikes.

In the second, fatigue began to set in on both men, drawing two restarts of the action by referee Marc Goddard, but in the final frame, Naurdiev found a second wind and ended the fight with some hard ground strikes on an exhausted Prazeres.

The Main Card Is Coming Up Only On ESPN+ Start Your Free Trial Now!

Reyes’ volume striking was in effect in the opening stages of the bout, with Hadzovic slowly but surely catching up in the second half of the round. Add in a takedown in the final minute, and the Bosnian was getting into an offensive rhythm.

Hadzovic got the fight to the mat early in round two and he went to work on his foe, landing hard strikes as he got the mount position and then took Reyes’ back. From there, he unleashed a barrage of strikes until referee Leon Roberts halted the bout at 2:03 of the second stanza.

In a clash of flyweight prospects, Gillian Robertson earned her third UFC victory, submitting Veronica Macedo in the second round.

In the second minute, Robertson got the fight to the mat and took the mount position before trying to lock up an arm. Macedo escaped, but remained on the mat, allowing Robertson to take her back. Macedo stayed patient and worked her way into her foe’s guard, then the two stood with less than two minutes left. With under a minute remaining, Robertson scored another takedown, but Macedo was the busier fighter to the horn.

Macedo got the fight to the mat to start the second stanza, and after a burst of action, the two stood. Robertson shot for a takedown and got it, but it was Macedo reversing position yet again. Robertson looked for an armbar, and while that came up short, she was able to transition into the mount position and then into a rear naked choke, and it was the choke that forced Macedo to tap out at the 3:27 mark of round two.

It was a wild opening round, one that began with a point deduction from Teymur by referee Herb Dean for a fence grab. Teymur did everything in his power to make up for that lost point, but Fishgold was a step ahead throughout, as he scored with his strikes on the feet and the mat, and nearly ended matters with an armbar late in the frame.

After the frantic pace of the first round, Fishgold was certainly fatigued, but he made sure that it wasn’t necessary for him to stick around much longer, as he took Teymur down early in round two, got his back and then sunk in the rear naked choke that ended the bout at 1:10 of round two.

Pedersoli got off to a good start in the opening round, but as he tried to put an exclamation mark on it in the closing seconds with a head kick, Grant cracked the Italian with a right hand that sent his mouthpiece flying and put him on the deck. Grant fired off ground strikes on his foe, and referee Marc Goddard saw enough, halting the bout at 4:59 of round one.

Abreu started the first round well, but as soon as Ankalaev landed a short right hand that clearly broke his nose, the momentum switched corners and Ankalaev took over, with a long stretch in the top position on the ground securing the round for the Russian.

Over the next two rounds, Ankalaev fought at a measured pace, and whether on the feet or the mat, he controlled the action, as Abreu never seemed to recover from the nose break in the first round.

The rise of Russia’s Petr Yan continued in Prague, as “No Mercy” won a three-round unanimous decision over John Dodson in a clash of bantamweight contenders.

Not surprisingly, the pace was fast from the start, with Yan pressuring Dodson throughout. The Russian landed some hard right hands, but just before the horn, Dodson caught Yan and rocked him briefly.

Picking up where he left off in the previous round, Dodson dropped Yan in the third minute of the second frame, but Yan recovered quickly, and down the stretch he tagged Dodson with several hard punches and knees, leaving the New Mexico product flustered as he went back to his corner.

With five minutes remaining, Yan’s pressure didn’t let up in the slightest, and he continued to tag Dodson as the two battled it out against the fence. A little past the midway point, Dodson got the fight to the mat briefly, but Yan got up quickly and went back to picking his shots and landing them on the tiring Dodson both on the feet and the mat.

As the only Czech Republic native on the card, Lucie Pudilova had fans at the O2 in her corner from the start of her fight against No. 6-ranked contender Liz Carmouche, but it was the veteran flyweight Carmouche who left the Octagon with the three-round unanimous decision victory.

With the crowd roaring, Pudilova (8-4) came out fast, trying to keep Carmouche (13-6)  at bay with her kicks. But the Californian was taking no chances, and as soon as she was able to close the distance, she bulled Pudilova into the fence and kept her there until she was able to score the takedown with a minute and a half left in the round. Pudilova was able to cut Carmouche on the head in the midst of their grappling, but it was a clear round for “Girlrilla.”

Pudilova was busy with her striking attack through much of the second stanza, but just when she was starting to get in a solid rhythm, Carmouche slammed her to the mat with 1:39 left. Yet when Carmouche appeared to be taking over again, Pudilova scrambled her way into her opponent’s guard and began landing with hard strikes from the top position to finish the round strong.

In the third, Carmouche went finishing for submissions on the mat and nearly locked up a heel hook, but a ferocious series of elbows from Pudilova ignited the crowd and got the home country favorite free. There were more frantic attacks by Pudilova in the closing moments of the bout, but when the scores were tallied, they were for Carmouche via scores of 30-27 and 29-28 twice.

Following nearly 14 months on the sidelines after failing a post-fight drug test in his first Octagon bout against Khalil Rountree Jr., Poland’s Michal Oleksiejczuk impressed in his return, as he scored a first round stoppage of veteran light heavyweight Gian Villante.

Fast in and out movement by Oleksiejczuk kept Villante off-balance as the bout began, and while the New Yorker landed some shots, it was the Poland native who was getting into a rhythm, and when he landed a flush left hook to the liver, that was it for Villante, who went down to a knee and took a couple more shots before referee Marc Goddard stepped in and halted the bout at 1:34 of round one.

Heavyweight veteran Stefan Struve snapped a three-fight losing streak with a second round submission of Marcos Rogerio de Lima in the UFC Prague co-main event on Saturday, and the popular Netherlands native hinted at his retirement following the bout.

“I’m not a hundred percent sure yet,” said the 31-year-old Struve, who has scored the third most heavyweight wins in UFC history with 13 and is tied for most heavyweight finishes in UFC history with 11. So if it is the end for Struve, it’s been a career to be proud of, but after a rough start against de Lima, he proved that he’s still got gas in the tank to challenge the elite of the division.

De Lima dropped Struve with the first punch he threw, and that right hand allowed the Brazilian to start working his ground and pound attack. With 30 seconds left, de Lima got into the mount position after dominating the round, but he was unable to finish his foe.

Going immediately into the clinch, de Lima wanted to get back to the mat in round two, and while he got his wish, it was Struve on top. The “Skyscraper” tried to secure an arm triangle on his opponent, and after some work, he got it, forcing de Lima to tap out at 2:21 of the second round.

Following a second round submission victory, Stefan Struve announces his retirement in the Octagon.

In three fights at light heavyweight, Thiago “Marreta” Santos has gone from divisional newcomer to a possible 2019 title challenger, with Saturday’s third-round finish of Jan Blachowicz at the O2 Arena in Prague clearly putting him in the conversation for a shot at the crown.

“If it’s Anthony Smith, I’ll beat him again; if it’s Jon Jones, I’ll beat him too,” said Santos, who will be in Las Vegas next weekend to watch the main event of UFC 235.

Blachowicz was the busier striker of the two early in the fight, with his stiff jab working well. Santos responded with kicks to the leg and the occasional 1-2 upstairs. With a minute left, Blachowicz looked for a takedown but was pushed away by Santos, who added a right hand on the way out.

Warsaw’s Blachowicz kept the fight at a measured pace in the second stanza, allowing him to stay out of danger while picking his shots well. Santos was landing as well, particularly with his low kicks, but the bombs coming from his fists and feet were either coming up short or missing wide.

But early in the third round, Santos finally struck big, and after he put a charging Blachowicz down with a right-left, the follow-up barrage from the Rio de Janeiro native was mere window dressing, as the fight was stopped by referee Herb Dean at :39 of round three.

With the win, the No. 6-ranked Santos moves to 21-6. His 11th Octagon knockout win also puts him in a three-way second-place tie for most knockouts in UFC history.

Thiago Santos weighs in on his performance, his country and more following his main event win from Prague.