Special Things Happen When The UFC, Summer & The Fight Capitol Of The World Collide
By Thomas Gerbasi, on Twitter: @TGerbasi • Jul. 5, 2021

Ever since the UFC began regularly celebrating the start of summer in Las Vegas with epic events (and sometimes two or three of them), fight fans have looked forward to not only watching these events but traveling to the Fight Capital of the World to take in all the action on-site. And though the COVID-19 pandemic scrapped any such events in 2020, on Saturday, July 10, the annual early summer shows are back in front of a packed house in T-Mobile Arena for UFC 264: Poirier vs. McGregor 3.

So, what might you be in for this weekend? Read on for ten blasts from the past.

The UFC 86 battle between Forrest Griffin and Quinton Jackson in July 2008 was everything you hope a championship fight is, and for five rounds, the two light heavyweights fought as if more than just a belt was on the line. Filled with knockdowns, tactical stalemates, bone-rattling power shots, submission attempts, and drama, this fight had it all. When it was all said and done, Griffin walked away with a hard-fought five round unanimous decision that cemented his place in the sport as a world champion. 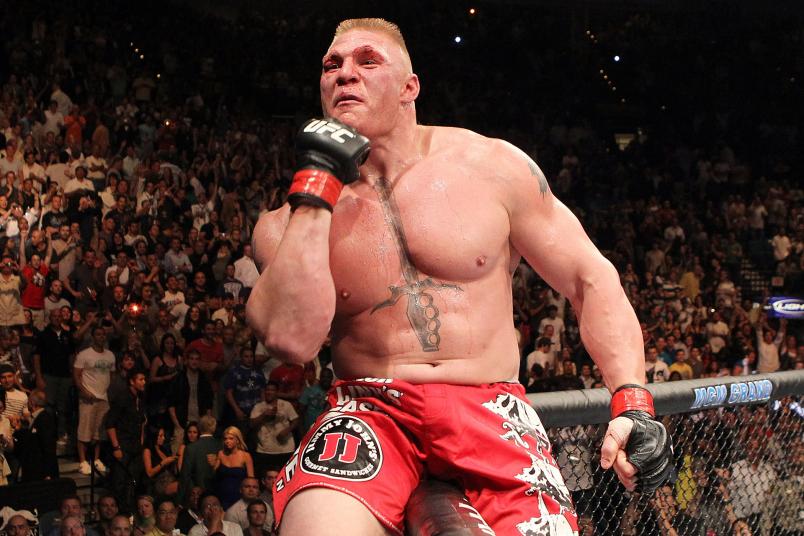 If you happened to doubt the punching power of Shane Carwin, it didn’t take long for you to become a believer in July 2010, as he cracked Brock Lesnar in the first round and proceeded to lay down a hellacious beatdown on the then-heavyweight champion. It was a stunning turn of events that was topped by Lesnar’s ability to weather the storm and make it out of a round he had no right surviving. Then, as the bell was about to ring for the second round, he smiled at Carwin just before taking his exhausted challenger down and submitting him with an arm triangle.

On the epic UFC 116 card in July 2010, Chris Leben and Yoshihiro Akiyama may not have been headliners, but they took that as a challenge, as they went on to put on one of the best fights of the year. Featuring fierce toe-to-toe action, changes in momentum, and a shocking and exciting finish, this bout had it all. And in the process, Leben, fighting for the second time in two weeks, completed his transformation from MMA’s problem child to legit middleweight contender with his third-round submission victory. 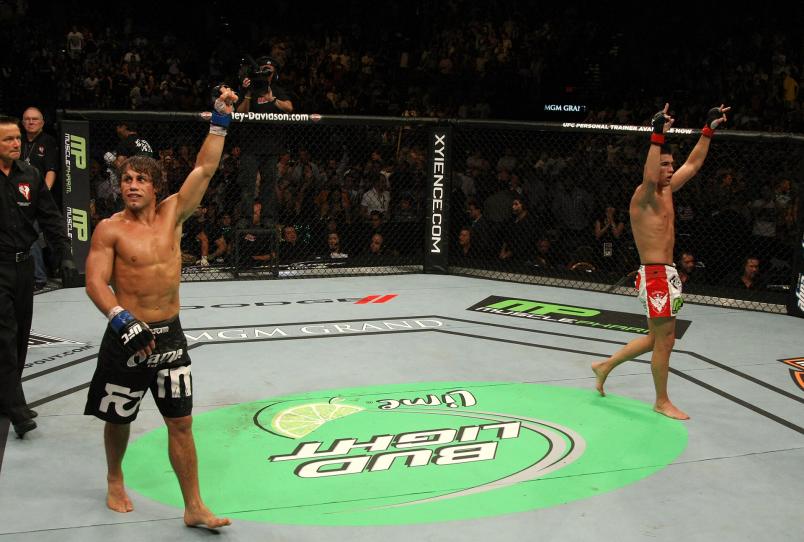 Urijah Faber and Dominick Cruz both celebrate after their hard-fought five-round fight for the UFC Bantamweight Championship at UFC 132 at MGM Grand Garden Arena on July 2, 2011 in Las Vegas, Nevada. (Photo by Donald Miralle/Zuffa LLC)

The grudge between bantamweight stars Dominick Cruz and Urijah Faber was real, so before their UFC 132 main event in July 2011, there was a fear that the fighters wanted so badly not to lose to their rival that they would be too cautious. Not a chance. Instead, Cruz and Faber fired off all their tricks at one another, fought at the insanely high pace 135-pounders are known for, and gave the fans a 25-minute fight to remember that Cruz won by unanimous decision. In the process, “The Dominator” evened the score with the first man to beat him.

For pure drama, the rematch between middleweight boss Anderson Silva and number one contender Chael Sonnen at UFC 148 in July 2012 was hard to top. The build-up to the fight was epic, and as soon as Sonnen took Silva down seconds into the bout, the crowd at the MGM Grand Garden Arena erupted and they didn’t stop roaring until the end came in the second round with Silva on top via TKO. Nearly two years of anticipation preceded this championship match, and the end result lived up to the expectations.

2013: Chris Weidman vs Anderson Silva I 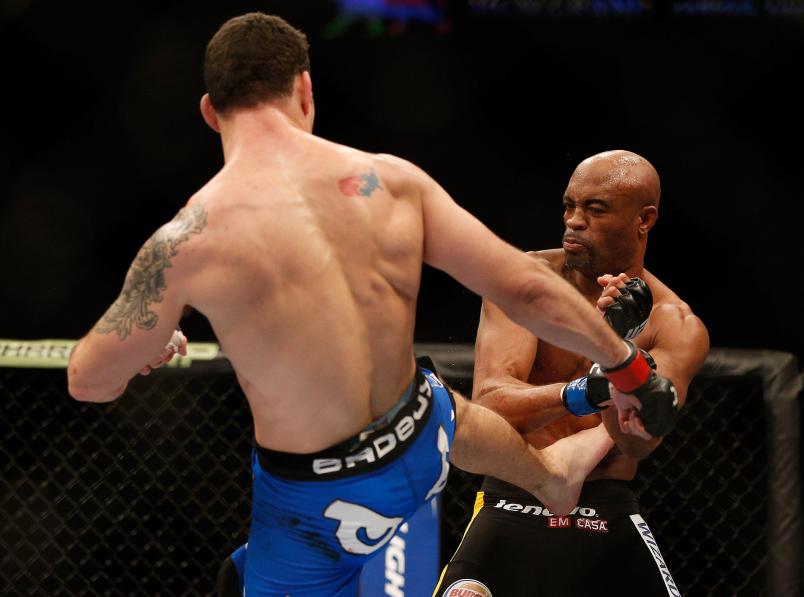 Despite facing a man who had shattered record after record, earning him accolades as the greatest fighter in mixed martial arts history, unbeaten Chris Weidman just knew he could beat fighting icon Anderson “The Spider” Silva. And in the main event of UFC 162 on July 6, 2013, the New Yorker did just that, making history as he knocked out the seemingly invincible Brazilian in the second round to shock the world and win the UFC middleweight championship.

UFC President Dana White called it the most important fight in UFC history, and he was right on target with his assessment of the Ultimate Fighter season one finale between Forrest Griffin and Stephan Bonnar in 2005. The bout saved the UFC and kicked off the MMA explosion that made the sport an international juggernaut. So, it was fitting that in 2013, Griffin and Bonnar were not just inducted into the UFC Hall of Fame, but they were put in with the greats together, marking a milestone in the sport’s history. 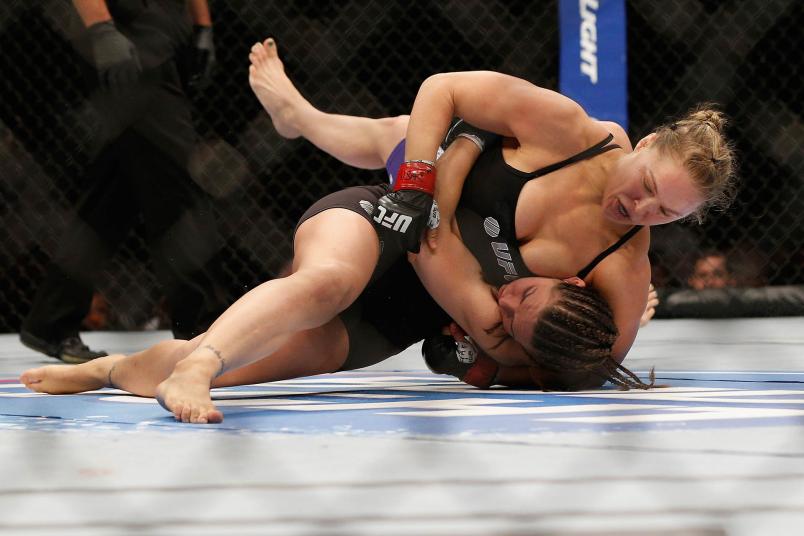 In her lone Vegas in July appearance, future Hall of Famer Ronda Rousey took what was expected to be her toughest test to date and ended it in 16 seconds, as she knocked out veteran contender Alexis Davis in the co-main event of UFC 175. The win was Rousey’s 10th as a pro without a loss and marked the fourth successful defense of her UFC women’s bantamweight crown. And at that point, there were few athletes in the world who were as big as “Rowdy Ronda”.

This weekend’s headliner is no stranger to big fights in Vegas and big fights in the summertime, but the only time “The Notorious” Conor McGregor meshed the two was in 2015, when he headlined the UFC 189 event on July 11 that saw him take UFC championship gold for the first time with a second-round stoppage of Chad Mendes that earned him the interim UFC featherweight title. On Saturday, he will make his eighth appearance in Las Vegas in the highly anticipated rubber match against Dustin Poirier. In the UFC 189 co-main event at the MGM Grand Garden Arena, who will ever forget the rematch between welterweight champion Robbie Lawler and Rory MacDonald, a 21-minute war that will live on in MMA history as one of the best championship fights ever witnessed. 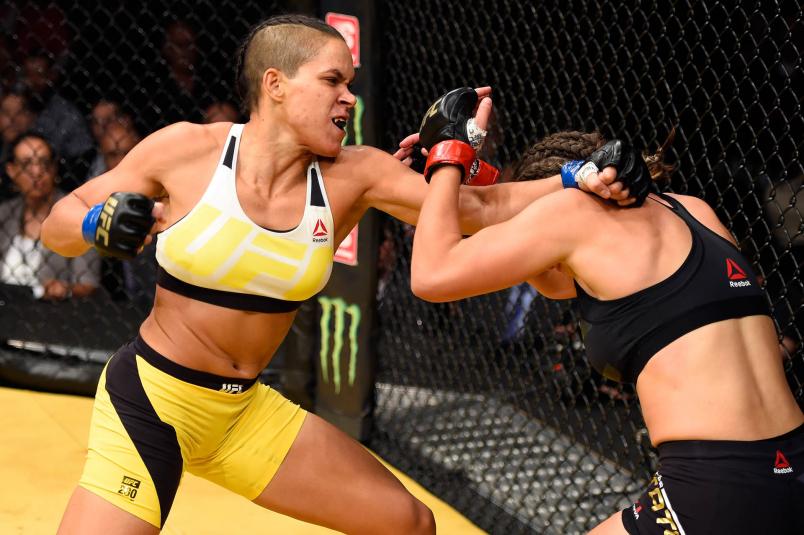 This was a wild one, and that’s even before fight night rolled around. Filled with drama, last-minute changes and plenty of card shuffling, the UFC 200 show finally took place at T-Mobile Arena, and the star power was at an all-time high, with Amanda Nunes, Brock Lesnar, Daniel Cormier, Jose Aldo, Cain Velasquez, Julianna Pena, Kelvin Gastelum, TJ Dillashaw, Sage Northcutt, Joe Lauzon, Gegard Mousasi and Jim Miller all emerging victorious on a stacked card.

I tried to keep this list to ten entries, but how could anyone forget the night of July 7, 2018, when light heavyweight titleholder Daniel Cormier dethroned heavyweight king Stipe Miocic to become a double champ in the Octagon? It was a night to remember, for sure, with spectacular performances also turned in by Anthony Pettis, Khalil Rountree Jr., and Paulo Costa.