By Matt Parrino and Translated By Tetsuya Takahashi • Feb. 21, 2016 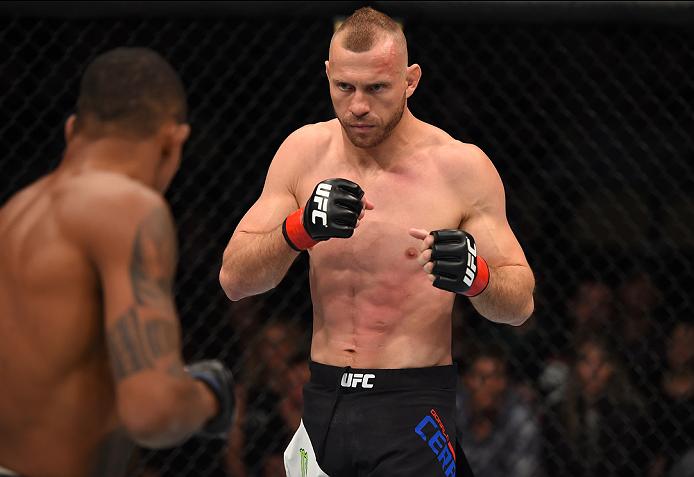 After an eight-fight win streak and a loss against Rafael Dos Anjos in his bid for the lightweight title, Cerrone was thrilled to get back to basics. He just wanted to have fun again.

A loose and happy Cowboy Cerrone is a bad opponent for any fighter – at 155 or 170 – and Oliveira realized why in his first UFC main event. Once the fight went to the ground, Cerrone wasted no time getting mount position before applying a tight triangle choke that forced Oliveira to tap immediately.

“This is the first time I really felt alive back there,” Cerrone said. “I had (Derek) Brunson dancing to country music back there with me. It was good. It was fun. Actually, this fight was for me. I was just telling all my buddies that I got nothing to worry about. I’m not on a winning streak. I’m in a weight class I’m not even in. It was just fun.”

Oliveira made a big jump in just his fifth fight in the UFC to face No. 5-ranked lightweight Cowboy Cerrone on short notice.

But the Brazilian cowboy said that it’s just simply in his nature to be there when he’s asked to fight and perform.

“I took the fight on short notice and the fight was a great experience,” Oliveira said. “Cerrone caught me and that’s the way fights go. When the UFC calls me I’ll be there and I’ll go in.”

At the post fight press conference, Cerrone, who made his 30th appearance under the UFC and WEC banners against Oliveira, was quick to interject and tip his hat to his fellow cowboy.

“They billed this as cowboy versus cowboy and how there’s only room for one. But I don’t know if it gets more cowboy than him stepping up and taking a fight on two week’s notice," Cerrone said.

Olivera said that he plans to take care of the feather, flashing his signature smile.

“That’s what cowboys do – they step up,” Oliveira said.

Before his Team Jackson-Wink teammate Cowboy Cerrone stole the show in the main event, Derek Brunson made a major statement in the middleweight division with his fourth straight win and third straight first round TKO.

Brunson has been making waves at 185 pounds during his recent run, but the way he dismantled Roan Carneiro on the co-main event stage sent a message loud and clear to the rest of the division: Brunson is here to stay.

During the press conference, fellow middleweight Uriah Hall took to Twitter to call out Brunson for what would be a great future bout. Brunson was quick to accept the challenge should the UFC feel the matchup makes sense.

“Let’s do it baby,” Brunson said. “What’s up Uriah Hall, if you want to do something let’s go. I’ve been calling him out for awhile… I’m going to slam him on his head and beat him up.”

3. Garbrandt living up to the hype

The pressure was on when Cody Garbrandt made his walk to the Octagon in front of his hometown fans to face Augusto Mendes, but “No Love” didn’t seem to mind.

Garbrandt had a look of unbreakable focus cemented on his face, and he didn’t waste any time once the fight began, KOing Mendes just 4:18 into the first round.

Combining speed, power, great wrestling, the look, and some of the highest intensity in his division inside the Octagon, Garbrandt is just scratching the surface of his potential.