UFC Phoenix: On The Rise

There are a few intriguing newcomers poised to step into the UFC cage this weekend. Here’s a look at three of those athletes. This is On the Rise: Phoenix Edition.
By E. Spencer Kyte • Feb. 11, 2019

For the first time in the promotion’s history, Sunday’s UFC main card will air exclusively on ESPN, as the organization brings a stacked six-fight lineup to “The Worldwide Leader” from the Talking Sticks Resort Arena in Phoenix, Arizona.

While ESPN broadcast preliminary card bouts from the year’s first event and will air this weekend’s final four prelims as well, there is something meaningful about having a UFC main card holding down the Sunday prime time slot on the premier sports network in the world.

As much as the UFC is a household name, there really is something special about seeing a card like this promoted, packaged and delivered on the ESPN airwaves that signals that 2019 really is the beginning of a new era in the Octagon.

Ironically, one of the two men who ushered in the UFC’s time on FOX will serve the same role here, as former heavyweight champion Cain Velasquez returns for the first time in more than two years to square off with knockout artist Francis Ngannou in an explosive main event pairing destined to have a serious impact on the heavyweight title picture.

Although the card features a number of familiar names and important, meaningful fights, including a lightweight scrap between James Vick and Paul Felder, a crucial welterweight pairing between Vicente Luque and Bryan Barberena and a Top 10 bantamweight bout featuring Jimmie Rivera and Aljamain Sterling, there are also a few intriguing newcomers poised to step into the UFC cage this weekend.

Here’s a look at three of those athletes.

This is On the Rise: Phoenix Edition.

A third generation Gracie, the UFC neophyte is the son of the legendary Rickson Gracie, and although he has just four fights to his name and hasn’t competed in the cage in over two years, there are plenty of reasons to be excited about the arrival and debut of Kron Gracie.

The 30-year-old featherweight is, as you would expect, an outstanding submission grappler, having won the Under 77kg Division at the 2013 ADCC Submission Wrestling Championships and collected a silver medal in the lightweight division at the 2011 Mundials. In four MMA appearances, Gracie has collected four wins, all by submission, including tapping out former UFC competitor and respected Japanese veteran Tatsuya Kawajiri in his last appearance.

Unlike the old WWF days, there are no squash matches for newly signed standouts, as Gracie is getting thrown right into the fire with a bout against Alex Caceres this weekend in Phoenix.

Although “Bruce Leeroy” remains a mercurial talent and maddeningly inconsistent, the former Ultimate Fighter contestant will be making his 20th trip into the Octagon against Gracie and should serve as a perfect measuring stick for where the newcomer will slot in amongst the hopefuls looking to make hay in the 145-pound weight division.

If Gracie can walk in and make quick work of Caceres, he’ll have the opportunity to make an expedited climb up the rankings. If he struggles, there is still plenty of reason to be intrigued by his upside and afford him a little time to shake off the rust, develop his game and still make a go of things in the UFC. 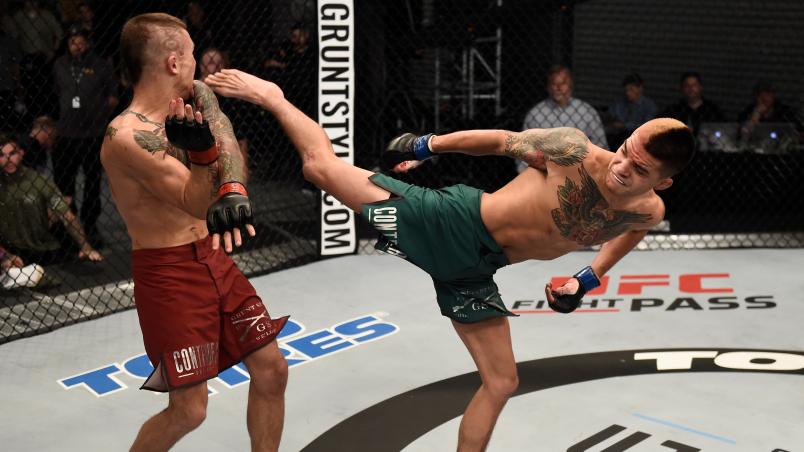 As an undefeated member of Team Alpha Male, there was a lot of attention on Lopez when stepped into the cage in the penultimate fight on the penultimate episode on Season 1 of the Contender Series against former Legacy bantamweight champ Steven “Ocho” Peterson.

After a hard-fought 15-minute affair, “Golden Boy” got the nod by split decision and secured a UFC contract, debuting in the Octagon 15 weeks later with a unanimous decision win over Albert Morales. Sporting a 9-0 record and coming off a very good win, a lot was expected of Lopez in 2018, but unfortunately, he never set foot in the cage.

Fighting in the final month of 2017 delayed his first start the following year and then, prior to facing fellow upstart Ricky Simon, the 24-year-old was sidelined with an ankle injury that kept him out of action for the remainder of the year.

Lopez returns this weekend, however, in a showdown with another bantamweight prospect and former OTR alum, Manny Bermudez, in a bout that will leave one of the unbeaten upstarts with their first professional loss.

Bermudez has looked good in his first two trips into the Octagon, registering submission wins over Morales and Davey Grant to push his record to 13-0. If Lopez can end the New Englander’s perfect start while pushing his winning streak to 10, he’ll set himself up as one of the top prospects in the division.

The 27-year-old “Spitfire” was a member of the case on Season 26 of The Ultimate Fighter, where she lost to Roxanne Modafferi in the quarterfinals after defeated Christina Marks in the Round of 16. Matched up against Gillian Robertson on the finale, Whitmire lost to the American Top Team product via armbar, but rebounded nicely in her sophomore appearance in the UFC cage, scoring a unanimous decision win over Jamie Moyle at UFC 226.

This weekend, Whitmire welcomes Aleksandra Albu back to the Octagon for a third time in a strawweight fight that kicks off the festivities on Sunday. Albu is 2-0 in the UFC, but hasn’t fought since July 2017, when she earned a unanimous decision win over Kailin Curran.

Whitmire, who now trains at Xtreme Couture and has shown a ton of moxie and grit in her first two UFC starts, has the potential to hand the 28-year-old Russian her first professional setback and start making a little headway in the highly competitive strawweight division. If she’s up to the task this weekend, a move up the fight card the next time out would be in order.