The Big Red Made Their Way To The UFC PI For A Little Work Before The USA Open Wrestling Championships
By Gavin Porter • Apr. 25, 2019

The Big Red are a powerhouse in the wrestling world, wreaking havoc on tournaments across the globe so naturally Wattenberg, who is the UFC PI’s director of nutrition, invited the well decorated team to come out for a training session.

Wattenberg knows the importance and opportunity that comes with providing the PI’s resources to disciplines and athletes that fall under the combat sports umbrella.

“To be able to support these guys and provide them with the resources of the UFC Pi is incredible,” Wattenberg said. “We will continue to build a strong network that is unique to combat sports that develops and enhances performance. The UFC PI really wants to expose the fact that we have un-matched resources and we want to use them to cultivate athletes.” 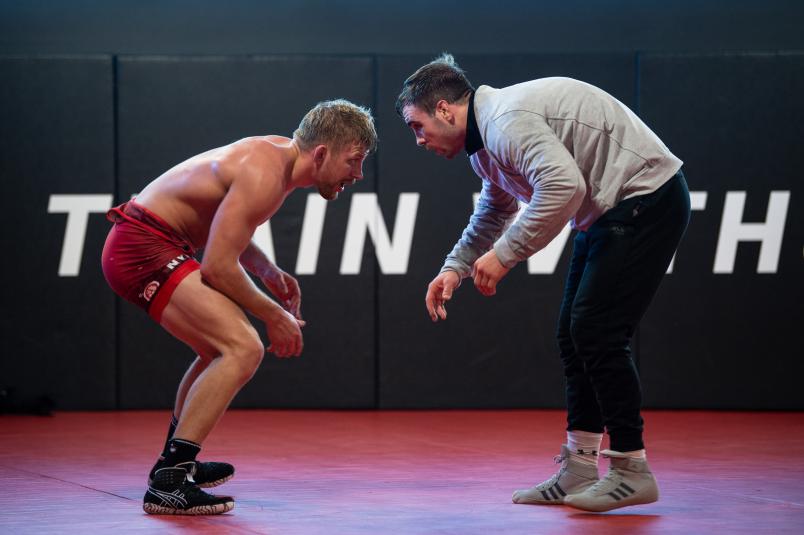 Koll believes that bringing his athletes to the UFC PI gives them extra energy and provides them with insight into what the future of wrestling will look like.

“It’s just exciting for the guys to be in this building,” Koll said. “To be training around Clint and around Forrest Griffin is special to them. The PI takes us out of that old school training mindset and helps us realize there is a science behind what we do. It isn’t merely what you see in Rocky. The PI adds a legitimacy and respect to combat sports.”

Dake, who recently won the 2018 World Wrestling Freestyle Championships in Budapest, can’t help but feel excited to be in the PI. During his warm-up on Wednesday he spent time hitting a bag, jumping on-top of the fence and using various equipment throughout the facility. 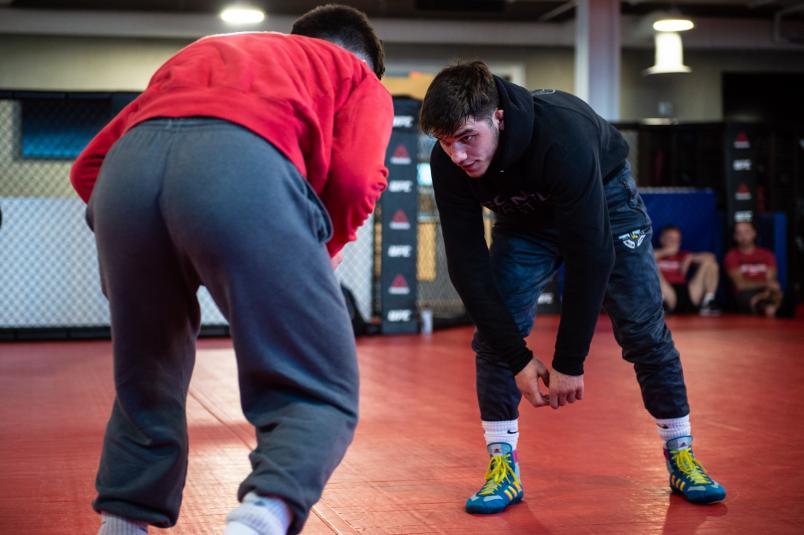 In addition, Dake actually grew up in Ithaca, NY the same town as UFC light heavyweight champion Jon Jones. They even were on the same club team growing up. He also has built relationships with stand-out UFC stars and collegiate wrestlers Henry Cejudo, Ben Askren and Daniel Cormier. These connections make this experience even more special for Dake.

“It’s pretty amazing because not everyone gets to do something like this,” Dake said. “This is a state of the art facility and for some people it is their dream to train here. Thanks to Clint this is like a home away from home for us. It’s private and we have everything we need under one roof. It’s just incredible to be here and to walk in the footsteps of some truly great athletes.”

This weekend the team will turn their attention to the US Open at South Point Hotel Casino and Spa. It will be an Olympic level competition that only accepts the best of the best.

If one thing is certain, it’s that Coach Koll and his athletes are ready to go.