DUSTIN POIRIER VS ANTHONY PETTIS
If only the UFC could make a quick switch and get the Octagon WEC blue for this main event, it would be the perfect setting for two veterans of that beloved promotion. And while it’s been nearly seven years since the WEC closed its doors, expect Dustin Poirier and Anthony Pettis to fight with the same hunger they showed back then because this is an important match for the future title hopes of both men. Poirier has looked great since returning to the lightweight division, but he needs to win the big one, and they don’t get bigger than a main event against a former champion. Pettis is in a similar situation, and while he snapped a 1-4 stretch with a win over Jim Miller in his return to 155, his last big win in the division was over Gil Melendez in December 2014, meaning that he’s got to show off vintage “Showtime” to start making his case for another crack at the crown.

MATT BROWN VS DIEGO SANCHEZ
Matt Brown has gone from saying this is his final fight to sitting on the fence a bit as the bout draws closer. And that’s good, because despite his recent 1-5 cold spell, he looked good against Donald Cerrone and was in his decision losses to Robbie Lawler and Johny Hendricks. Yes, no one knows a fighter better than the fighter himself, but from the outside, Brown can still be a dangerous force at 170 pounds. Can Sanchez do the same in his return to the welterweight division? Saturday night will answer that question for the man who is once again the “Nightmare.”
RELATED: Matt Brown - It's Been a Great Ride | Countdown - Poirier vs Pettis

JUNIOR ALBINI VS ANDREI ARLOVSKI
Back when he was in his prime, Andrei Arlovski looked invincible at times. These days, the grizzled vet has hit some rough road, losing five straight heading into Saturday’s bout with Junior Albini. And while Albini looked impressive in halting Tim Johnson in his UFC debut, Arlovski still has those veteran tricks up his sleeve, and if he can avoid the Brazilian’s incoming fire, that experience could serve him well when he needs it most.

NATE MARQUARDT VS CEZAR FERREIRA
Along the same lines as Albini-Arlovski, veteran Nate Marquardt is in the midst of a 2-5 rough patch as he prepares to meet Cezar Ferreira. In this case, though, Marquardt can’t use the experience card too much, as “Mutante” has made the walk to the Octagon 11 times already. What Ferreira can’t sleep on, though, is Marquardt’s still potent power, which has seen him end three of his last four wins by knockout.

RAPHAEL ASSUNCAO VS MATTHEW LOPEZ
As the years go by, the more I appreciate Raphael Assuncao. How could you not? The guy is a true pro who shows up, fights, usually wins, and then it’s back into the gym until the next time. Of course that quiet personality has hurt him, but if he gets past the tough Matthew Lopez this Saturday, which would make him 10-1 in his last 11, you have to put him in the race for a title shot.

JOE LAUZON VS CLAY GUIDA
If my fight night report on Lauzon vs Guida is a little late, it’s probably because I put the keyboard down in order to just 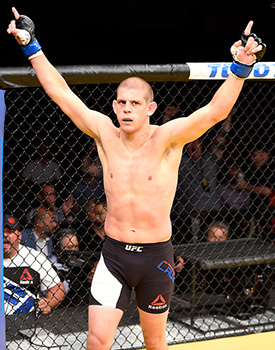 Marcin Held in January of 2015" align="right" /> sit back and enjoy this one. Two of my favorite people, in and out of the Octagon, Lauzon and Guida have never fought before, which is remarkable considering that they’ve been around each other for over a decade. But that’s okay, because we’ve got it now, and this is the odds on favorite to take Fight of the Night honors.

DARREN STEWART VS KARL ROBERSON
Karl Roberson didn’t stick around long in his bout on Dana White’s Tuesday Night Contender Series, but that 15 seconds of work got him a UFC contract that he kicks off Saturday against Darren Stewart. London’s “Dentist” showed off some potent power of his own in his debut against Francimar Barroso, but that bout wound up being ruled a no contest, and the rematch was all Barroso. In response, Stewart is making a drop to 185 pounds for this one, and there should be some bombs thrown by both fighters before this one is over.

JOHN DODSON VS MARLON MORAES
I’m firmly in the camp that believes Lauzon-Guida takes Fight of the Night honors, but if there’s a close second, I’m going for this one between John Dodson and Marlon Moraes. Despite losing his UFC debut, Moraes is one of the best bantamweights of recent years, and in Dodson, he has a willing dance partner who will be throwing with speed and power all night.

TATIANA SUAREZ VS VIVIANE PEREIERA
The Summer of 2016 looked to be the start of something big for TUF 23 winner Tatiana Suarez, but then she was sidelined by shoulder surgery. On Saturday, the former standout wrestler returns against fellow unbeaten Viviane Pereiera, and with the strawweight division getting a little shakeup last weekend, the winner here can get a jumpstart as well.

SAGE NORTHCUTT VS MICHEL QUINONES
“Super” Sage Northcutt is back in action for the first time since his December loss to Mickey Gall, and yes, he’s still only 21 years old. In that time away, he joined up with the Team Alpha Male squad, and that’s only going to help him against Michel Quinones on Saturday and in his future bouts. Plus, he’s back in the lightweight division and confident that he can begin his run this weekend.

ANGELA HILL VS NINA ANSAROFF
Drop this one in the striker vs grappler category, as Angela Hill will look to keep it standing against Nina Ansaroff, who picked up her first UFC victory in January with a submission of Jocelyn Jones-Lybarger. If Hill can stay on her feet, she’s got the style to light up the room – and her opponent – but Ansaroff is no newcomer to the sport, so expect that her American Top Team coaches gave her plenty of options to try and take the fight into her world.

COURT MCGEE VS SEAN STRICKLAND
On a card as stacked as this one, some fights will inevitably fall below the radar. This welterweight matchup between Sean Strickland and Court McGee fits that description perfectly. But this is a solid fight where both guys are tough outs who are willing to go into the trenches to get a win, and that’s just what they’ll probably have to do this weekend in Norfolk.

JAKE COLLIER VS MARCEL FORTUNA
Opening the show is what should be a nice scrap between light heavyweight prospects Jake Collier and Marcel Fortuna. Win or lose, Collier is always down for a fight, and while Fortuna is known for his ground game, his power on the feet was pretty evident in his UFC debut win (at heavyweight, no less) over Anthony Hamilton.