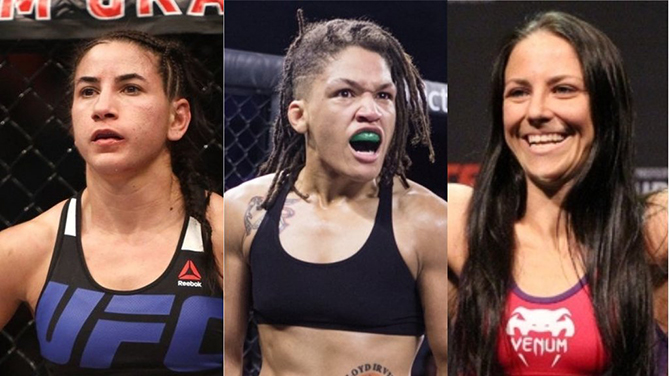 This weekend Outsports Pride will bring over 150 LGBTQ athletes, coaches and others in sports together at New York City Pride. The UFC, NFL, Nike and the Los Angeles Dodgers are teaming up with Outsports as event partners to continue their commitment to inclusion in sports.

UFC is sponsoring the event and is also the presenting sponsor of Outsports’ NYC Pride March contingent. UFC women’s strawweights Nina Ansaroff and Tecia Torres, along with women’s flyweight Sijara Eubanks, will be joining Outsports for the Pride March.

Although Ansaroff has been to a few Pride marches in the past, Sunday will be her first time participating in the New York City march.

“I’m super excited,” Ansaroff said. “It'll be fun to be there with Tecia and I think it’s great the UFC supports its athletes. It means so much for a company to have your back when you’re doing something strong whether that’s about Pride, domestic violence or other social issues.”

Ansaroff hopes that other athletes see what Outsports and the UFC is trying to accomplish and continue to be themselves.

“When your company has your back it makes it easier to be who you are,” Ansaroff said. “When you can be who you are, it makes you more confident and better at what you do.”

Weekend events include the Outsports Pride Summit and BeTrue’s Celebration of Courage later today, followed by social gatherings and the Pride March on Sunday.

Read more about Outsports Pride and this weekend's events here.