It’s as intoxicating a moment as you will find in the fight game. An athlete seemingly comes out of nowhere, puts on an electrifying performance in his UFC debut, and all of a sudden, he is the greatest thing since pizza, ready for a title shot…NOW.

Gavin Tucker, the latest fighter to experience the glow of the unforgettable debut, laughs. He knows that despite a dominant effort in defeating Sam Sicilia in front of his hometown crowd in Halifax last Sunday, there is still time for him to start calling for a fight against featherweight champion Jose Aldo.

“I’d like to get the next progressive step, someone that makes sense to build a successful career and continue making money in the long run and keep the momentum going,” Tucker said of his future on the afternoon after the biggest win of his career. “Jumping in against a guy and going up a weight class and all this crazy s**t that people are doing lately, that’s real cool and a lot of fun when you’re bored, but I’m not bored. 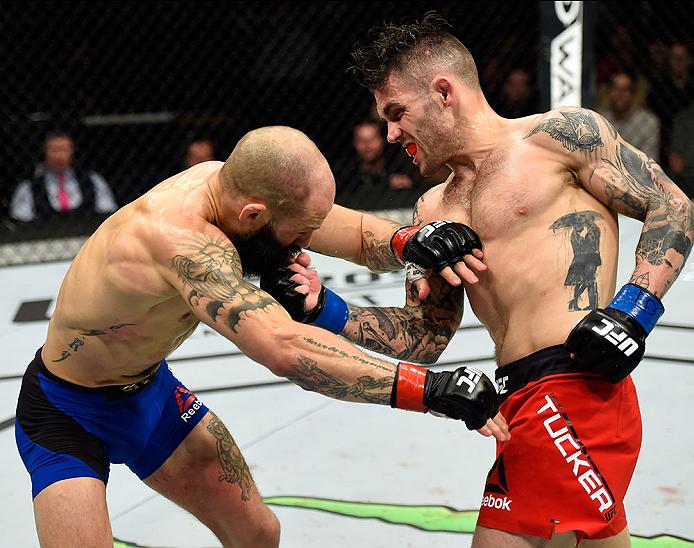 "I’ve got 10 fights. The guy I just fought has more fights in the UFC than I have fights, so I’m still cutting my teeth. I think the appropriate next step would be someone who defeated Sicilia or a newcomer who is in a similar type of boat or someone the UFC feels is a good stylistic matchup for me.”

Now 10-0, the 30-year-old Tucker has the right mindset when it comes to his career, but even he has to admit that he put on a fight that had people talking long after it was over. And it wasn’t just the technical aspects of the victory that brought him attention, but a charisma that had the fans roaring from the time he made the walk to the Octagon. So what about those first-time UFC jitters, Mr. Tucker?

“I have nerves for every fight,” he said. “It’s a fight, but that stuff (first-time UFC jitters) is not real. It’s only real if you let it be real. It was my tenth fight and that’s how I approached it. I just defended the city like I always do.”

That he did, in the process introducing UFC fans to a native of Newfoundland who went from jazz guitarist to a sport where his hands now make a different kind of music. These days, Tucker, who has three diplomas in different areas of music, doesn’t even pick up his guitar anymore.

“I’d be intimidated to pick up my instrument and even try and demonstrate where I was, much the same as a retired fighter coming back and sparring again,” he said. “I devote myself to what I do, so I expect a certain amount of quality, I suppose, out of myself.”

The music business’ loss was mixed martial arts’ gain, and since turning pro in 2011, he gained a solid reputation on the Canadian scene that made his Octagon debut a highly anticipated one. And then came the fight, and the cheers, and the win. Now he’ll wait for the next one.

“Fighters fight and I’m a fighter,” Tucker said. “They’re gonna come to me with a name and I’m gonna say yes. I’m not particular and I’m not gonna be a very difficult boy to deal with. I’m just gonna get it done. I’m not out there to look good, protect a record or anything like that. I’m out here to make money and to shine in the UFC.” 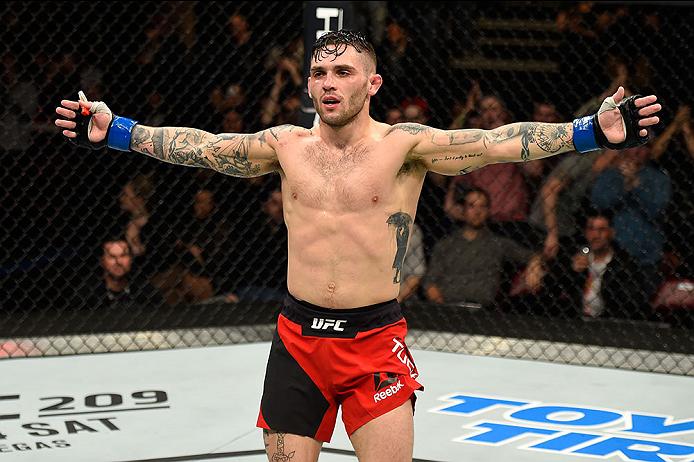 Tucker chuckles, admitting that when he got home from the Scotiabank Centre, the one thing on his mind was not locking up the heel hook he attempted and finishing the fight. That’s a good sign that despite his victory, he’s far from satisfied. So don’t expect the spotlight or fan adulation to get to him. He’s not built that way. In fact, he can’t explain how he’s built; he’s just taking everything as it comes.

“I don’t feel under any obligation to be the person I was five minutes ago,” he said. “I’m quite moody in that way. I guess it’s what the musicians describe as ‘artistic temperament.’ (Laughs) I’m very affected by things going on around me, so last night I tailored my style to the opponent that I had. I’m not gonna stand in front of that right cannon. Next time, I don’t even know what’s gonna come out.”

The world will be watching though, and that’s the whole idea for a featherweight who has taken an interesting journey to a place he says is his destination.

“This is it,” he said of mixed martial arts. “This is the only thing that’s held my full attention. In some form, martial arts has always been in and out of my life since I was a kid. It eventually creeped its way in and this is everything to me. When I finished (the Sicilia fight), I celebrated with a bottle of water. I sat down and talked to my mom about how fights work, went back home with my girl and woke up today thinking, okay, when I get to no-gi class tonight, I have to teach that $50,000 mistake I made by not collecting the second leg when I went for the heel hook. (Laughs) This is not a passing phase at all. This is it now. This is my life. I love it and even if I was never gonna fight again, I’d wake up every day and go to the gym and train.”