Covington implemented a perfect game plan - wrestling and wearing down Lawler in Round 1, then out-striking him for the remainder of the bout. Lawler is one of the most respected fighters in UFC history, who has fought – and won – several five-round wars. His bout with Covington may have went five rounds but it was anything but a war. Namely because Covington wouldn’t allow it. He pressed forward and overwhelmed Lawler for nearly the whole fight.

“It wasn’t even competitive,” Covington said. “I’m on another level and I’m the greatest welterweight of all time. There’s not a man alive that can keep up with this pace.”

And now his case for a title shot is as undeniable as ever.

Performance of the Night: Matt Schnell

Matt Schnell’s UFC career didn’t get off to the start he expected. He admitted as much after his win at UFC Newark.

“When Sean Shelby and Mick Maynard signed me to this division they had the idea that I was the type of guy that could save it,” Schnell said. “I stumbled out of the blocks early on and didn't live up to the hype. It was hard and it hurt. But I’m living up to it now.

To say he’s living up to what UFC matchmakers had expected would be an understatement. His win in Newark was the second-fastest submission in UFC flyweight history and it came against 9th-ranked Jordan Espinosa. It’s also his fourth in a row.

The top of the flyweight division has been comprised of a lot of familiar faces the last few years. Champion Henry Cejudo may have saved the division, but Schnell believes he can be the next big thing to carry on its legacy.

“I expect to break the Top 10 and be one of the next guys to face a potential contender and make myself a contender,” Schnell said. “I can beat anyone. I’ve turned heads everywhere I’ve gone.

Haqparast said earlier this week that his bout with Joaquim Silva would be the Fight of the Night. That didn’t end up proving  to be true because Haqparast finished the fight too early, and it secured him his second consecutive performance bonus.

Haqparast has been pegged as one of the UFC’s top young prospects and he made a huge step in making that case after his knockout of Silva. With legendary trainer Firas Zahabi and all-time great Georges St-Pierre in his corner, it’s hard to doubt the 23-year-old lightweight. But Haqparast isn’t rushing things.

“Some guys try to get famous fast but I don’t aim for that,” he said.

Social Post
Fight of the Night: Shevchenko vs Pudilova

The two week stretch of fights for the Shevchenko sisters got off to a promising start. Antonina made it clear during fight week she was hungry to avenge her first career from earlier this year. Antonina did just that and she did so in impressive fashion.

Things weren’t looking great when she got caught with a clean elbow from Pudilova, which opened up a big cut. But Antonina was unfazed and she responded by nearly submitting Pudilova with an armbar moments after the elbow.

When the fight went back to the ground in the second, Antonina showed her jiu-jitsu skills once again and finished Pudilova off with a rear-naked choke. 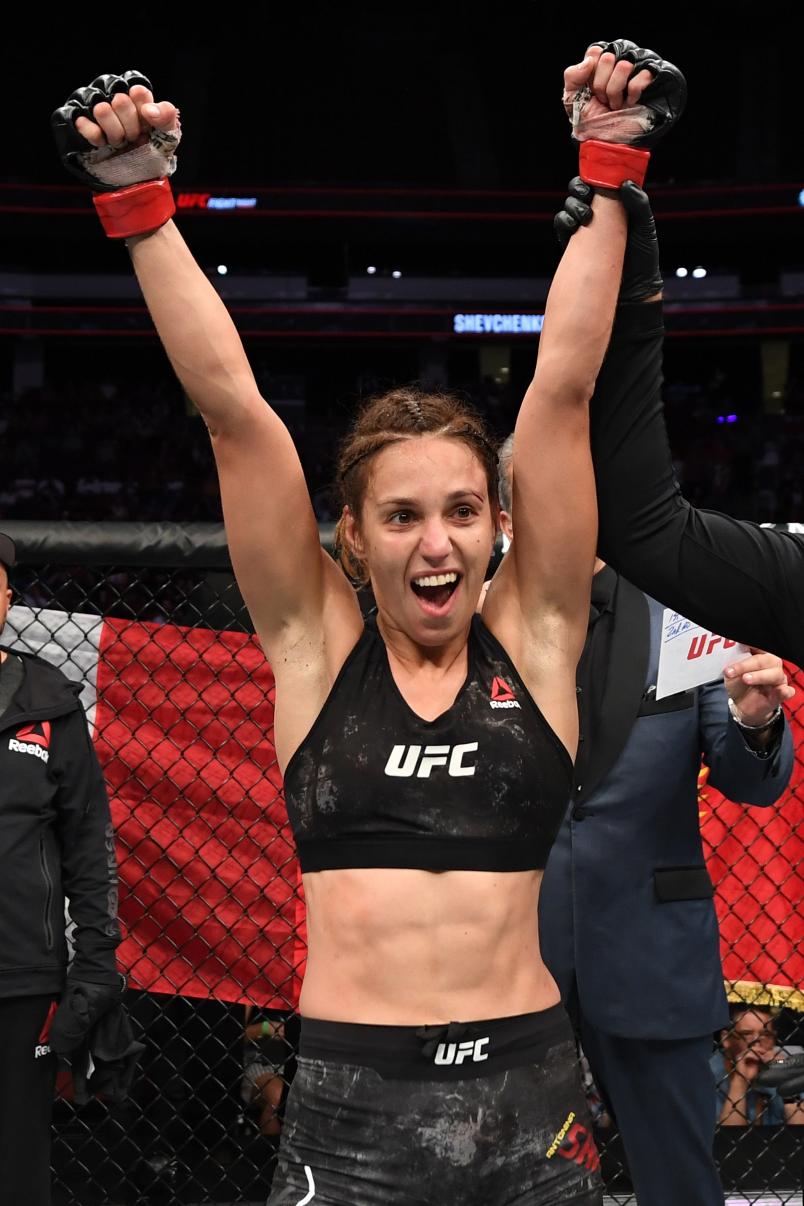 NEWARK, NJ - AUGUST 03: Antonina Shevchenko of Kyrgyzstan celebrates her submission victory over Lucie Pudilova of Czech Republic in their women's flyweight bout during the UFC Fight Night event at the Prudential Center on August 3, 2019 in Newark, New Jersey. (Photo by Josh Hedges/Zuffa LLC)

Mickey Gall did not disappoint in front of his hometown New Jersey fans. Gall and Salim Touahri put on an electric show, exchanging blows back-and-forth for all 15 minutes. The pressure of fighting for the home fans clearly gave Gall a boost.

“I fed off their energy,” Gall said. “Every time I cracked him and I heard them go crazy, I got excited. It’s Jersey toughness.”

Is there a more fitting nickname than Scott “Hot Sauce” Holtzman? Holtzman has delivered entertaining fights time and time again and he didn’t disappoint the fans at UFC Newark. Holtzman survived a knockdown and delivered some devastating shots that eventually led to a TKO by doctor’s stoppage.

With so many impressive finishes on the card, Holtzman was unable to secure a performance bonus – something he’s yet to accomplish despite his plethora of entertaining fights.

Veteran Jim Miller tied Joe Lauzon for the most finishes in UFC Lightweight history, securing his 12th with a guillotine choke of Clay Guida less than a minute into their co-main contest. The effort was also good for 3rd most submissions and 3rd most wins in UFC history.