NASCAR drivers Spencer Gallagher and Noah Gragson grew up in Las Vegas without a professional team of their own to cheer for.

“You (would) play the NHL hockey (video) games and you’re like, ‘man, what team am I gonna pick?’” Gragson said. “So now finally we can pick the Vegas Golden Knights. It’s a dream come true.”

Fast-forward to 2018 and Gallagher and Gragson have all the pro sports they can handle.

That’s because NASCAR has three events in Vegas this weekend, UFC 222 goes down Saturday night at T-Mobile Arena, the VGK are at home Friday vs. Ottawa on the ice, and the 2018 USA Sevens rugby tournament emanates from Sam Boyd Stadium making Friday, Saturday and Sunday the “Ultimate Sports Weekend” in sunny Las Vegas.

A pep rally in Toshiba Plaza kicked off the action Wednesday night when representatives from all four professional sports came together to get the party started. No. 1-ranked UFC flyweight Joseph Benavidez has made Vegas his home in recent years and is thrilled to see the boom of pro sports in the city.

“Sports is basically entertainment and (Vegas has) always been the entertainment capital,” Benavidez said. “So now we’re seeing with obviously the UFC, the Golden Knights and (eventually) the Raiders – it’s just more entertainment. And I think that’s what this place is built for.”

The athletes from all four sports took part in a program that ran for a few hours outside of T-Mobile Arena for fans in attendance. There was a question and answer session, musical performances and ticket giveaways.

The pep rally was a chance for fans to get exposed to all four organizations and for the athletes to get a taste of what the other spots are all about.

“Everyone from all different sects of sports are going to be here tonight to see what everyone has to offer,” Gallagher said. “I think it’s a great opportunity for us in the NASCAR industry to show Rugby what we have going on; For those in the Rugby industry to go talk to the UFC. They both like to hit each other and those are two sports with a lot of similarities.”

UFC Hall of Famer Forrest Griffin has been a Las Vegas resident since 2004 and has seen the transformation of the city into a real sports giant since his arrival. But the former light heavyweight champion was quick to remind everyone who was first on the scene.

“The UFC was Vegas’ first home team. We were here first,” Griffin joked. “We’re very happy to have the Knights and NASCAR, who may have actually been here first. But, semantics, right? Rugby Sevens, I’m very excited for that. I wish we had more rugby in the states.”

Don’t miss UFC 222 live on pay per view Saturday night beginning at 10pm/7pm ETPT. And for those in Las Vegas here is a complete schedule for the “Ultimate Sports Weekend.” 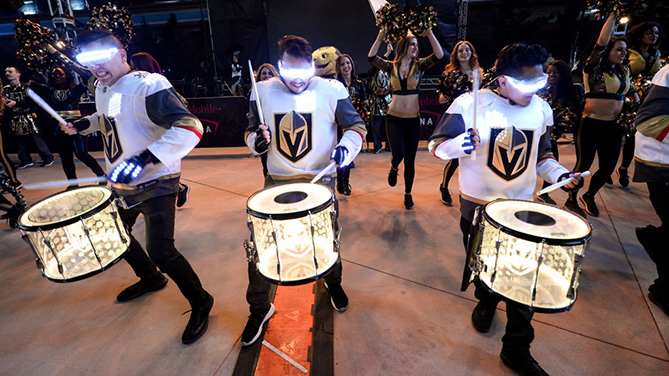 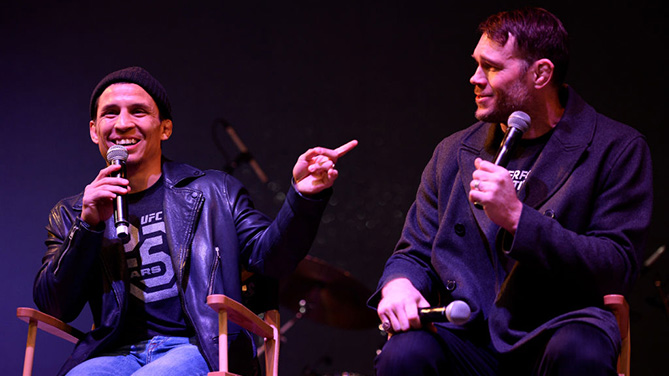 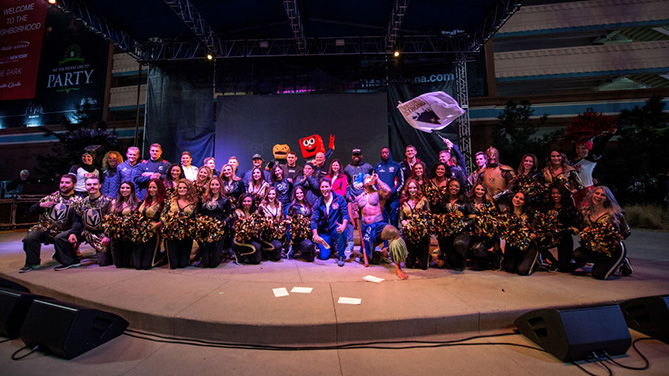 Count @ForrestGriffin and @JoeJitsu as two fans excited for #UFC222 Saturday night. They talk about the card and Joe B. talks about his return to action in June. pic.twitter.com/u1ZB04tCut
— UFC News (@UFCNews) March 2, 2018