A New Feature That Highlights Some Of The Best Performances & Competitors From The Previous Month Of Action Inside The Octagon That Could End Up On The Half-Year & Year-End Awards
By E. Spencer Kyte, on Twitter @spencerkyte • Jan. 24, 2023

Welcome to the debut of the UFC Monthly Report!

The opening month of action inside the Octagon is already in the books, as the first two events of the 2023 campaign have come and gone, with plenty to discuss.

There have been 26 contests so far this year, with 16 of them ending inside the distance. Every division on the men’s side of the roster has been represented thus far, and there has been at least one finish in each of those weight classes, with the flyweight ranks leading the way with two technical knockouts and one submission, capped by Brandon Moreno’s third-round finish last weekend at UFC 283 in Rio de Janeiro, Brazil.

And now, without any further ado, let’s look at some of the standout performances from the first month of action inside the Octagon in 2023.

Although there have already been a handful of impressive efforts by debutants or relative newcomers, there was only one correct answer when it came time to select the breakout performance of January… and it was two efforts.

Brazilian brothers Ismael and Gabriel Bonfim earned contracts on the same episode of Dana White’s Contender Series last fall, and last weekend in Rio, each brother made a statement in his respective promotional debut.

First up, elder brother Ismael Bonfim collected a second-round knockout win over Terrance McKinney. After using the first round to draw out actions and make reads, the 27-year-old lightweight backed up into space and then launched into the air, planting a beautiful switch knee on the jaw of McKinney, sending him plummeting to the canvas.

A few fights later, younger brother Gabriel waltzed into the Octagon and collected an impressive finish of his own.

Paired off with Mounir Lazzez, the unbeaten 25-year-old was a little frenetic and hurried out of the chute, wading into an early exchange with the more experienced Tunisian where he got hit with a couple clean shots. But he also landed a shot or two of his own that got Lazzez’s attention, and when the veteran welterweight rushed forward looking for a takedown, Bonfim quickly wrapped up his neck, rolling through the backwards momentum to land in mount and collect the tap.

It was an outstanding night for the Bonfim Brothers, and it’s going to be interesting to see what these two talented newcomers do for an encore later in the year. 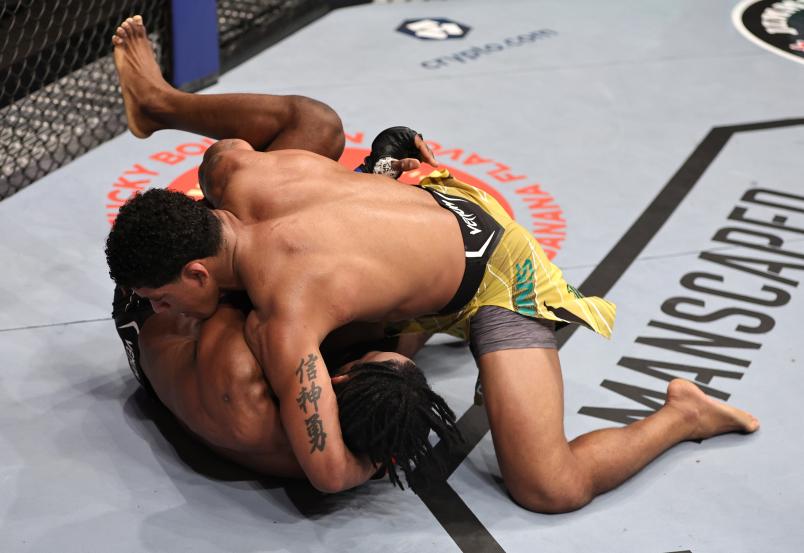 Gilbert Burns of Brazil battles Neil Magny in a welterweight fight during the UFC 283 event at Jeunesse Arena on January 21, 2023 in Rio de Janeiro, Brazil. (Photo by Buda Mendes/Zuffa LLC via Getty Images)

Bonfim’s finish of Lazzez was great, Allan Nascimento’s opening event submission of Carlos Hernandez was class, and so was Thiago Moises’ second-round finish of Melquizael Costa at UFC 283.

But the best of the month was Burns’ first-round arm-triangle choke on Neil Magny.

The multiple-time Brazilian jiu jitsu world champion hot back to his grappling roots, putting the experienced and skilled Magny on the canvas quickly and with relative ease. From there, Burns floated through positions, looking for openings while keeping Magny pinned to the canvas before climbing into mount.

Despite being right up against the side of the cage, Burns was able to secure an arm-triangle choke and draw a frustrated tap from Magny. It was an absolutely dominant performance from “Durinho” that cements his standing as one of the top contenders in the 170-pound weight class.

The undefeated bantamweight collected the biggest win of his professional career in the year’s opening event, finishing Barcelos in the waning moments of the first round.

Expected to be a solid test for the streaking Nurmagomedov, the 27-year-old established himself quickly, showcasing his diverse array of kicks and striking aptitude while flashing a little of his grappling acumen, as well. Late in the round, the Brazilian pressed forward looking to close the distance, prompting Nurmagomedov to lunge forward with a hopeful elevated knee.

Though the knee came up short, he instinctively followed it with a short left hook that twisted Barcelos’ head around and sent him crashing to the canvas. It was shot thrown in the spur of the moment, without a huge amount of torque or intended force, and it still put Barcelos out.

Nurmagomedov is now 4-0 in the UFC, 16-0 for his career, and stationed at No. 11 in the rankings. He’s one of the most talented prospects in the organization and has the talent to make a run towards the top of the bantamweight division before the year is out. 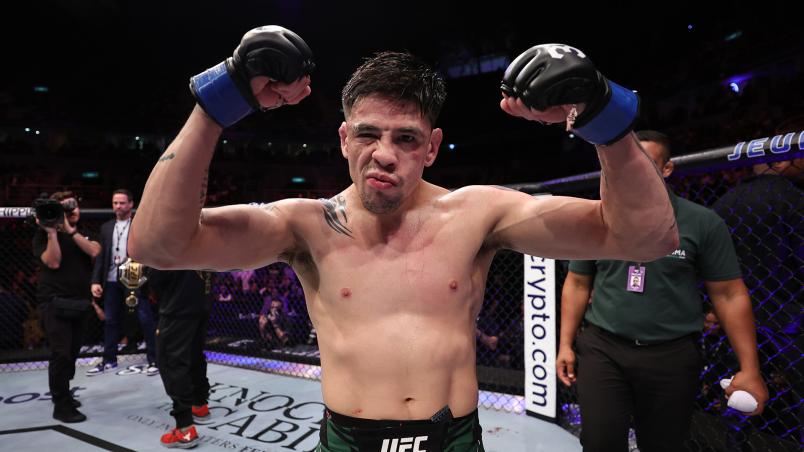 Brandon Moreno of Mexico reacts after his victory over Deiveson Figueiredo of Brazil in the UFC flyweight championship fight during the UFC 283 event at Jeunesse Arena on January 21, 2023 in Rio de Janeiro, Brazil. (Photo by Buda Mendes/Zuffa LLC)

While it didn’t go the distance like the battle for the vacant light heavyweight title between Jamahal Hill and Glover Teixeira, the flyweight clash between Moreno and Figueiredo was an even more tense and competitive affair for as long as it lasted.

The bitter rivals have always been incredibly evenly matched, and it was evident against early in this one, as each man landed good shots and looked to take control of the contest. Moreno did an excellent job of mixing things up, initiating grappling exchanges and generally pressuring Figueiredo more than he had in any of the previous three meetings.

For all three rounds, the power of the Brazilian titleholder hung over the contest, everyone knowing that Figueiredo carried the requisite power to shift the dynamics of the fight in one shot. Instead, it was Moreno that landed the telling blow, catching Figueiredo with a left hand to the eye that left the Brazilian reeling and resulted in his eye swelling to the point that the fight had to be stopped.

It was a slightly anticlimactic end to the fight and the rivalry, but it sets up what should be a thrilling year in the flyweight division, with Moreno seated on the throne and numerous potential challengers are ready to take aim at the two-time champ.