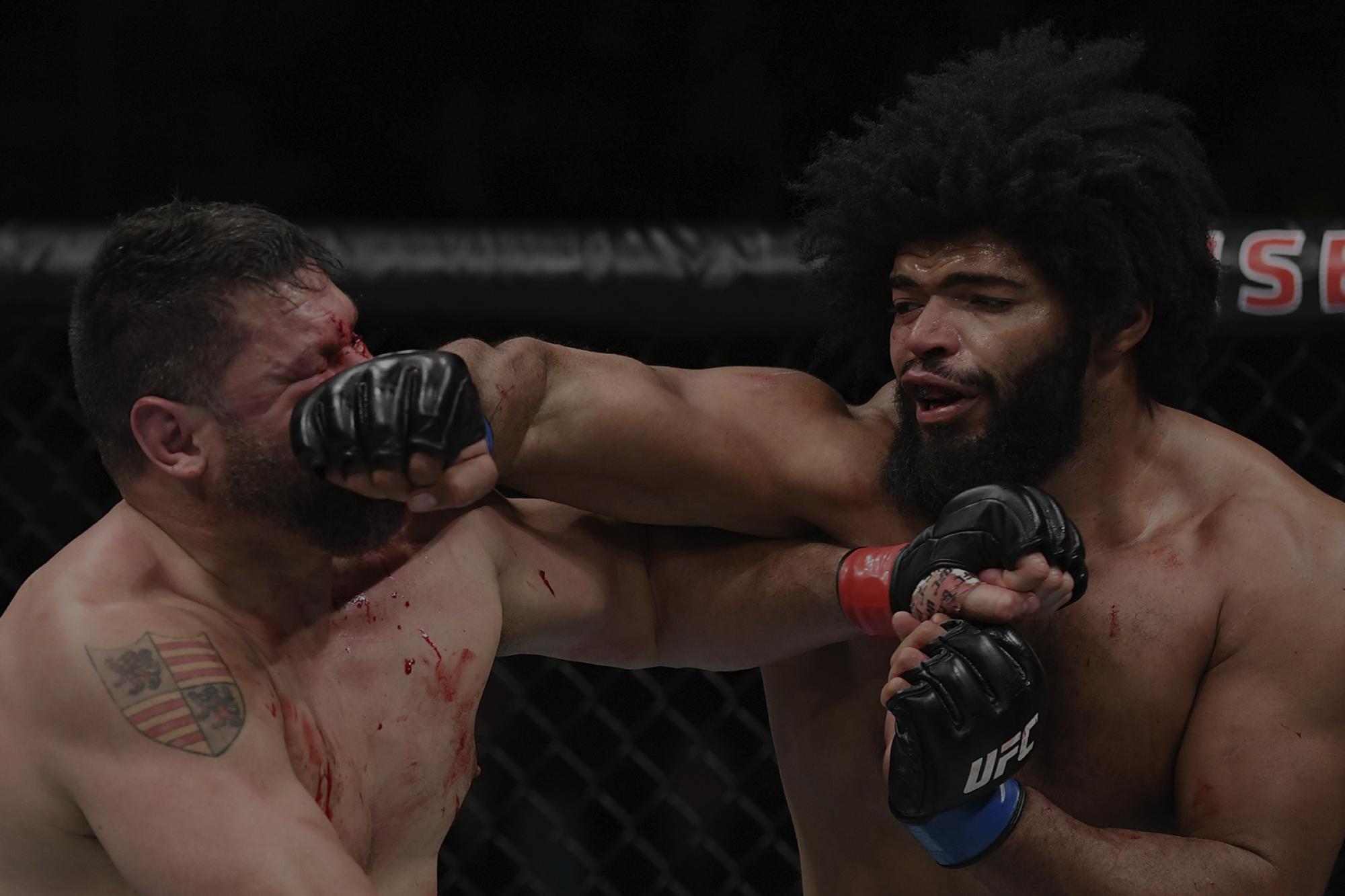 Milwaukee’s own Zak Ottow made the most of his late-notice assignment against welterweight newcomer Dwight Grant, as he scored a split decision victory in UFC Fight Night action at Fiserv Forum.

Grant’s bursts of pressure worked well for him in the opening round of the fight, but they were sporadic, allowing Ottow to stay in the fight and get more comfortable. It was the same story in the middle five minutes, with Grant landing the most significant shots of the round, but Ottow still managing to stick around and keep his opponent from running away with the bout.

Grant (8-2) started fast in the third, but his aggression allowed Ottow (17-6) to get his first takedown of the fight. With three minutes left, Grant got back to his feet, but Ottow remained locked on to his foe. Ottow wasn’t able to floor Grant again, but when the final scores were tallied, Ottow, who replaced the injured Erik Koch, emerged victorious via scores of 29-28 twice and 28-29.

Lightweight up and comer Drakkar Klose earned the biggest win of his career, decisioning Bobby Green over three fast-paced rounds.

The first round between the two lightweight rivals was an interesting one, with Klose landing several hard kicks to the leg while Green slowly but surely got into a rhythm on the feet that had him showing off a well-rounded striking attack both offensively and defensively.

A minute into round two, Green scored the first takedown of the fight and he worked well from the top position, ultimately getting himself into the mount position. With a little over two minutes left, Klose got to his feet and went on the attack, targeting the body and head of Green, who was cut around his eye. A takedown attempt by Klose did come up empty, though, as Green landed in the top position as the two fell to the mat.

The action heated up even more in the third, with Klose doing his best to make it a brawl, forcing Green to counter. By the second minute, Green started leading the striking exchanges, but Klose landed some good shots in response, and down the stretch Klose surged, with both fighters getting a well-deserved roar from the crowd as the bout ended.

Jared Gordon had his moments against with Joaquim Silva, but it was Silva who emerged victorious in the action-packed lightweight bout via third-round TKO.

After a brief feeling out process, Gordon jarred Silva with a right hand and then used an arm triangle to put the Brazilian on the mat. Silva was able to work his way back to his feet, but as he pursued Gordon, the New Yorker rocked him again and scored another takedown, where he delivered more punishment before the two stood. But Silva was not done yet, as he hurt Gordon on the feet and nearly finished matters with a guillotine choke before the horn intervened.

Silva was able to turn back Gordon’s first takedown attempt of the second round, but “Flash” was able to land his next one and keep the fight there until midway through the frame. While standing, the two kept trading hard blows, but Silva added some more points to his tally with a takedown and kneebar attempt in the final minute.

After the fast-paced action of the first two rounds, Silva and Gordon were understandably winded in the third, but neither stopped trading while standing in the pocket. That was Silva’s game, though, and ultimately, Silva’s bombs hurt and finished Gordon, with referee Rob Hunds stopping the fight at 2:39 of round three.

Jack “The Joker” Hermansson was dominant in his middleweight bout with Gerald Meerschaert, submitting the local favorite in the first round.

Hermansson got the fight to the mat in the first 30 seconds, setting up his renowned ground-and-pound attack. In the second minute, he took Meerschaert’s back and flattened him out, opening up the Milwaukee product for more strikes. Meerschaert was able to momentarily find daylight, and that’s all he needed to sink in a guillotine choke. Hermansson got free though, and he went back to firing away on the mat until he sunk in his own choke, and this guillotine worked, as it forced Meerschaert to tap out at 4:25 of round one.

Former welterweight standout Zak Cummings made his first UFC start as a middleweight a successful one, as he took a three-round unanimous decision over Trevor Smith.

The two veterans showed off their experience at the top level of the game from the start, doing the little things that make a difference in a fight, and by the end of the first frame, they were both marked up thanks to some hard strikes.

Cummings got busier in the second round, but Smith’s counters were sharp while the two stood, making it clear that he wasn’t going anywhere. Cummings did score a knockdown with a left hand early in the third round, but as he went in for the finish, Smith was able to take the top position in a scramble. Midway through the round, Cummings got back to his feet and landed some good shots, but the two went back to the mat, this time with Smith scoring with strikes before a final standup exchange before the horn.

Featherweight prospect Dan Ige made it two in a row, as he gutted out a hard-fought three-round unanimous decision over Milwaukee newcomer Jordan Griffin.

It was an action-packed first round, with Ige (10-2) largely controlling matters on the mat with hard strikes from the mount. Griffin (17-6) did have his moments, as he nearly locked in a guillotine choke and then surged with strikes in the final 30 seconds, but the frame belonged to the Hawaiian.

Ige got the fight back to the mat to open round two, but Griffin scrambled his way out of trouble and nearly caught Ige in another choke. Ige got loose, but this time it was Griffin in the top position, and he took over with ground strikes for the rest of the stanza, evening the fight.

Ige was tired in the third, but he dug deep and outworked Griffin down the stretch, allowing him to take the bout via three scores of 29-28.

Both fighters left no doubt as to their intentions, as they both unleashed bombs to start the bout. Rodriguez drew first blood with a left hand that dropped Milstead, and the two proceeded to battle it out on the mat until rising with a little over three minutes left. Rodriguez still held the advantage at range, and he extended that lead at close range as well, with a left knee to the body sending Milstead to the canvas. An unanswered volley of blows on the mat ended the bout, with referee Rob Hinds stopping matters at 2:59 of the first round.

With the win, South Easton’s Rodriguez moves to 10-3. Pittsburgh’s Milstead falls to 8-3 with 1 NC.

Dana White’s Tuesday Night Contender Series graduate Juan Adams kept his unbeaten record intact in his UFC debut, as he halted Chris de la Rocha in the third round of their heavyweight opener.

It only took a minute for Adams to mark up de la Rocha’s face with his punches, and with the addition of leg kicks, he quickly had the veteran in trouble. In the second minute, Adams took his foe to the mat and the one-sided action continued. De la Rocha went for a leg to try and turn the tables, but Adams kept the ground strikes coming until the horn sounded.

In the second round for the first time of his career, Adams held off a spirited charge from his opponent, but with the continued battering by “The Kraken,” the gutsy de la Rocha was fortunate to make it into the final frame.

De la Rocha didn’t stick around long in the third though, as he was hurt early by a knee to the body, and after a series of right hands, referee Joe Fipp stepped in and halted the bout 58 seconds into round three.