Saturday’s UFC Mexico City event is in the books, and now that the dust has settled in Mexico, it’s time to go to the scorecard to see who the big winners were at Arena Ciudad de Mexico.

Sergio Pettis
Sergio Pettis may be the younger brother of former UFC lightweight champion Anthony Pettis, but he never got caught up in that syndrome of trying to catch up to his big bro or go flying off cages to find a place on the same highlight reels. He’s always been his own man, mature beyond his years, and maybe because of that, some people have slept on the talented Milwaukee native. Yet last Saturday, as he scored his fourth consecutive win over Brandon Moreno, Pettis can’t be ignored anymore. With a disciplined effort, beautiful technique, and the ability to come back from adversity, he delivered a complete performance. Is he ready for champion Demetrious Johnson yet? Is anybody ready for Demetrious Johnson? I say give him one or two more fights to gain experience, and soon we may be asking if the rest of the division is ready for Sergio Pettis.

Dustin Ortiz
It may be safe to say that if you’re a hot prospect in the flyweight division, Dustin Ortiz isn’t the guy you want to see across from you on fight night. Ray Borg, Justin Scoggins and Willie Gates all fell to the Franklin, Tennessee standout, and last weekend, Hector Sandoval joined that list, as he got knocked out in 15 seconds by Ortiz. After going 1-3 in his previous four, it was the kind of emphatic win Ortiz needed to keep his top 15 ranking, and if he wants to move up, he’s got to move past these “gatekeeper” type fights and beat the top guns in the top ten. He’s got the talent and experience to do it; now he’s got to deliver against the contenders like he does against the rising stars. 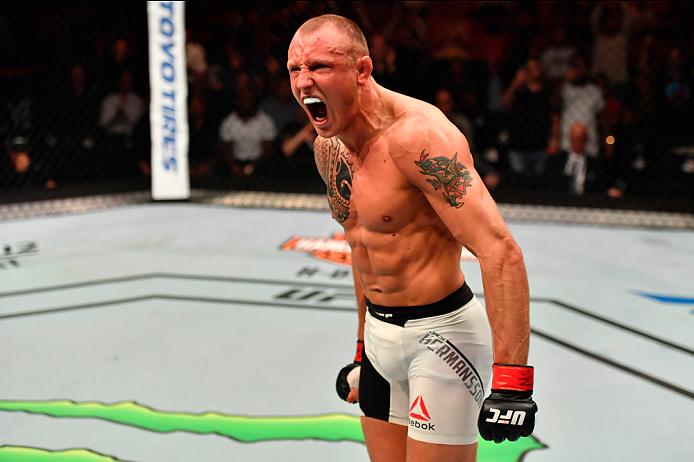 Jack Hermansson
Born in Sweden and living in Norway, Jack Hermansson found himself in Mexico City Saturday night, but the altitude was apparently not going to be an issue for “The Joker,” as he halted Brad Scott in less than four minutes. A ground-and-pound specialist, Hermansson put his money where his mouth is, brilliantly showing off a lost art these days. It’s not easy taking a talented opponent like Scott to the mat then finishing him off with strikes, but Hermansson got the job with what Jon Anik would call “Style points.” Hermansson vs. another GNP specialist in Elias Theodorou? Sign me up.

Humberto Bandenay
As I wrote last week, Humberto Bandenay was entering his UFC debut against unbeaten Martin Bravo with a heavy heart after the recent passing of his father. Add this to the usual UFC jitters and the prospect of facing a heavily favored opponent in that opponent’s home country, and things weren’t looking good for the 22-year-old from Peru. Oh, did I mention that he took the fight on two weeks’ notice? In short, all the odds were against Bandenay, but in just 26 seconds, he silenced an arena and announced his arrival to the big show. His highlight reel knockout of Bravo was one of the more spectacular debuts we’ve seen in a while, and knowing what it took for Bandenay to get here makes the story even better.

Niko Price
Niko Price is one of those fighters that, win or lose, will always be fun to watch. He just has that attitude and style that doesn’t allow him to be in a boring fight. But he hasn’t lost yet, and given his knockout of the durable Alan Jouban on Saturday, he may not for a long time. On paper, this matchup was Fight of the Night material, but as soon as it started, each welterweight was throwing with fight-ending intentions, which meant the idea of a 15-minute war wasn’t looking too promising. And that war didn’t materialize, a testament to Price’s power and finishing instincts, both of which make him a scary guy in a scary division.