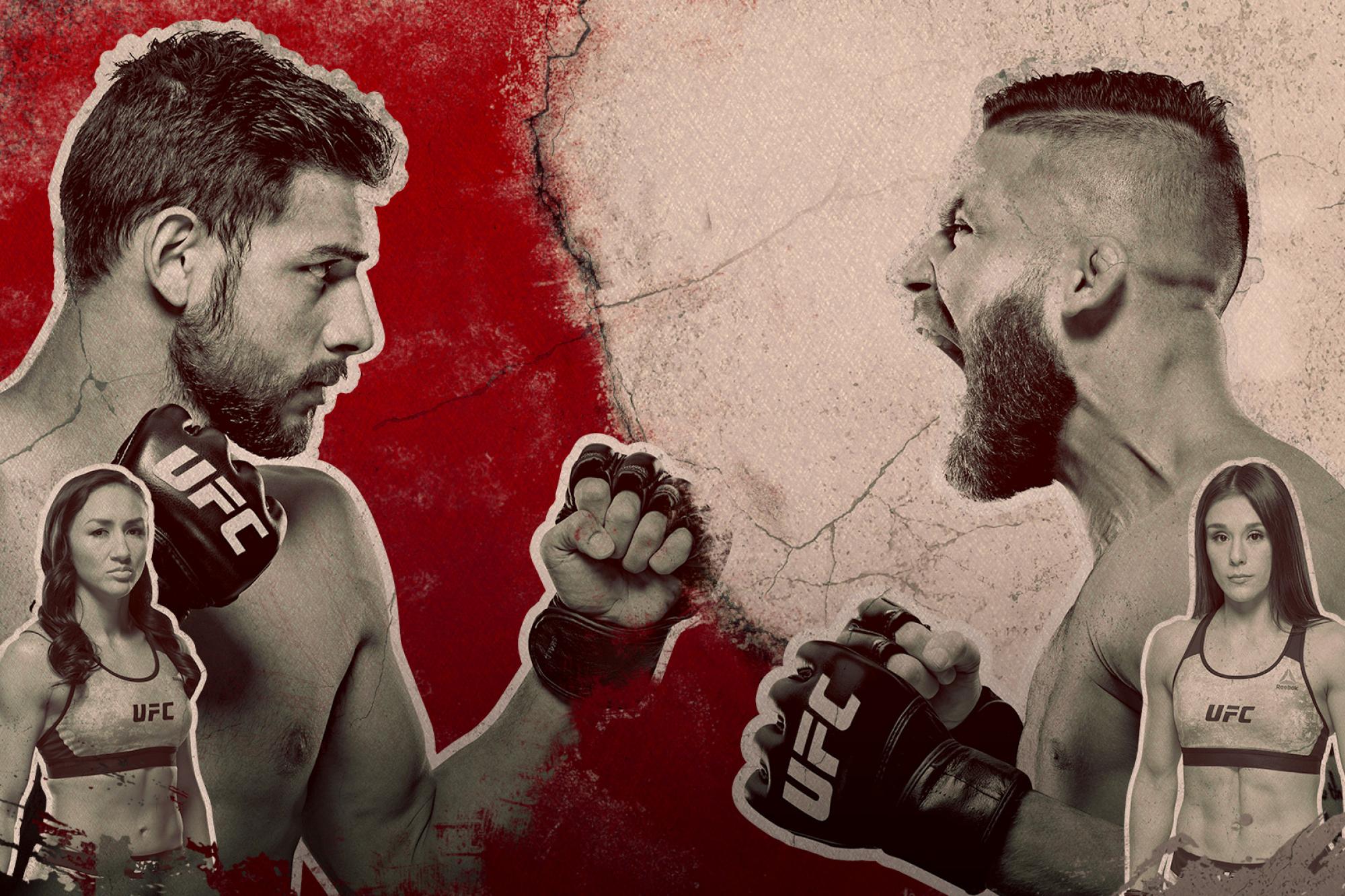 Puelles needed only 15 seconds to get the takedown, but after a spell on the ground, Mariano was able to force a restart from referee Fernando Salas Navarro just past the midway point of the opening frame. Mariano didn’t stay upright long, as Puelles slammed him back to the deck, and he kept him there until the horn.

Another takedown from Puelles opened round two, and this time, Mariano was unable to get back to his feet before the end of the frame, as the Peruvian dominated the action. There was more of the same in the third, and while Puelles tried to finish his foe with a kimura and then ground strikes, he had to settle for the win via decision.

Brazilian bantamweight contender Bethe Correia snapped a two fight losing streak against Sijara Eubanks and she had to dig deep to do it, rebounding from a near stoppage in the first round to take the next two frames and a unanimous decision.

The first was a big round for Eubanks, who used her striking to set up a takedown in the second half of the frame. On the mat, Correia was unable to mount any offense or get free, as Eubanks landed a series of unanswered blows that nearly halted the fight.

Correia got back in the fight in round two, though, as she stayed on her feet and worked the body of Eubanks, slowing down her foe’s attack, and in the third, it was close, but Correia simply outworked her opponent to lock up the victory.

Paul Craig is usually the king of late-fight heroics, but he ended his light heavyweight bout with Vinicius Moreira early, submitting the Brazilian in a single round.

As expected, the two engaged in several grappling exchanges early, but it was Craig’s striking that signaled the beginning of the end, as he landed knees at close range that dropped Moreira. Several ground strikes followed, but when referee Dan Miragliotta let the fight continue, the Scotland native locked in a rear naked choke and that prompted Moreira to tap out at 3:19 of the opening round.

Sergio Pettis’ return to the flyweight division was a successful one, as he scored a three-round unanimous decision over late-notice debutant Tyson Nam.

The first round was largely tactical, with Pettis likely edging it on the scorecards due to better accuracy on his feet, and while the fight remained close over the next two rounds, Pettis was just one step ahead all night thanks to his crisp striking and variety of attacks, all which kept the gutsy Nam from getting into an offensive rhythm.

Angela Hill scored her first stoppage victory since March 2016 in strawweight action, as she halted gritty UFC newcomer Ariane Carnelossi in the third round.

Hill controlled the action behind her superior technical striking game for the majority of the fight, but Brazil’s Carnelossi never gave in, as she stalked the veteran around the Octagon. In the final round, though, a single elbow from Hill ended the bout, as it opened a nasty cut just above Carnelossi’s left eyebrow that brought in the Octagonside physician to step in and stop the bout. The official time of the stoppage was 1:56 of round three.

After slowing down Reyes’ fast start with a clinch against the fence, Nelson briefly stunned the local favorite with an elbow before following it up with a right hand that hurt Reyes and appeared to have him out on his feet. Reyes didn’t go down under the ensuing onslaught from the Canadian, but it was clear that he had had enough, with referee Jason Herzog calling a stop to the bout at 1:36 of round one.

Popular Mexican battler Jose Quinonez got back in the win column, much to the delight of fans in Mexico City, as he shut out Carlos Huachin over three rounds in a bantamweight bout.

The crowd went wild when Quinonez scored with a right hand that dropped Huachin, and while he wasn’t able to finish the Peruvian brawler, he did give himself an early lead that he never relinquished. Two takedowns by the Zacatecas product also added to his advantage, and while Huachin continued chasing “Teco,” he was never able to catch him.

Texas featherweight Steven Peterson delivered a Knockout of the Year candidate, halting Martin Bravo in the second round.

Bravo set a frenetic pace in the opening round, scoring a takedown and also mixing up his attacks nicely on the feet. Peterson took a while to get into his rhythm, but by the end of the round there were plenty of spirited exchanges. In the second, Peterson had settled in and was scoring more frequently, and as the two traded spinning backfists, Bravo missed and Peterson landed, knocking the Rosarito native out. The official time of the stoppage was 1:31 of round two.

No. 10-ranked bantamweight contender Irene Aldana put on a memorable performance for her home country fans as she decisively outpointed Vanessa Melo over three rounds.

Beautifully using her reach advantage throughout the first five minutes, Aldana pecked and poked at Melo with stiff jabs, straight rights and thudding leg kicks. The Brazilian gamely marched forward, but her haymakers failed to hit their mark. It didn’t get better in the next two frames for Melo, who was gutsy and aggressive throughout, but who just couldn’t match the technique, speed and variety coming at her from the Guadalajara product, who was fighting at home in Mexico for the first time in nearly six years.

Melo missed weight for the bout, coming in at 140 pounds.

Flyweights Brandon Moreno and Askar Askarov had the Mexico City crowd roaring from start to finish in an entertaining three-rounder that was ruled a draw.

Askarov got the fight to the mat early in the first round and his ground game was impressive as he searched for submissions. But with less than two minutes left, Moreno found daylight and got in some good work from the top position before returning to his feet and wobbling Askarov briefly with a minute left.

Moreno’s striking got him off to a good start in round two, but Askarov had him on the deck before a minute had passed. After a brief spell on the mat, Moreno escaped and again landed some hard shots, only to find himself grounded once more moments later. Once standing, Arskarov looked for a takedown in the final minute, yet Moreno responded with a left kick to the head that dropped the Russian to the canvas, capping off another exciting round.

Moreno shocked Askarov early in the third with a takedown of his own. Askarov searched for submissions from his back while Moreno fired off ground strikes. With two minutes remaining, Moreno took Askarov’s back and nearly sunk in a rear naked choke. Askarov got free and ended the fight in the top position, and while no fighter is happy with a draw, it was certainly a fight with no losers.

Former strawweight titleholder Carla Esparza showed the heart of a champion once more in the UFC Mexico co-main event, surviving a tight armbar in the final round to pull off an exciting three-round majority decision win over Alexa Grasso.

The first round was a tough one to call, because while Grasso’s striking game was on target throughout the opening five minutes, Esparza did score a pair of takedowns that kept things close.

Esparza kept Grasso grounded for much of the second round, but once the two stood with 90 seconds left, Grasso was able to stagger her foe briefly before another takedown by the Californian just before the end of the round.

In the opening minute of round three, Grasso rocked Esparza again, and this time it wasn’t momentary, as she was forced to go on the run to clear her head. Esparza looked for the takedown, but Grasso defended well and then looked to lock up an arm. Grasso succeeded, but Esparza remarkably refused to tap and ultimately got loose. With Esparza on top, Grasso still tried to stay busy, and with less than 30 seconds left, she got to her feet, where they proceeded to slug it out to the horn, when they received a well-deserved ovation from the crowd.

The highly-anticipated featherweight bout between Yair Rodriguez and Jeremy Stephens ended almost as soon as it started, with Stephens unable to continue due to an injury stemming from an eye poke, prompting a no contest verdict in the UFC Mexico main event in Mexico City Arena.

Rodriguez fired off kicks to start the fight before an inadvertent eye poke forced a stop to the action. Stephens was given five minutes to recover, but when he was unable to open his injured eye, the Octagonside physician had no choice but to recommend that the fight be stopped. The official time of the no contest verdict was 15 seconds of round one.