<br/ >
SERGIO PETTIS VS BRANDON MORENO
Saturday’s main event is best described as the ultimate pick ‘em fight, because you can make a compelling case for either Sergio Pettis or Brandon Moreno to win. So what separates these two 23-year-olds who may be fighting for a future shot at the flyweight title? That old standby, high altitude. Moreno trained for over a month in Mexico City, giving him a slight edge over Pettis, who did work in Albuquerque for some of his camp. Where Pettis evens the score is that he’s a very patient fighter, so he can ease into the fight and make a surge late if the more aggressive Moreno doesn’t end it early. So we’re back where we started from – a pick ‘em fight with serious title implications. Nothing wrong with that. 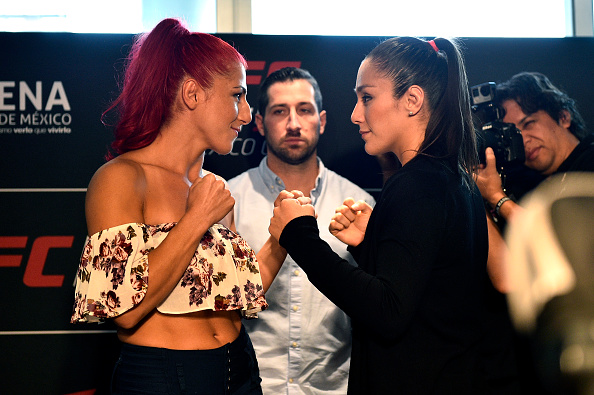 RANDA MARKOS VS ALEXA GRASSO
Alexa Grasso was competitive in her lone pro loss to veteran Felice Herrig earlier this year, and in the process, she learned a valuable lesson. If a fight’s going to the judges, make sure you leave no doubts that you won it. Easier said than done against someone like Randa Markos, whose wrestling attack gives her a clear edge over her striking-focused opponent. Markos is one of those fighters who finds a way to win, and Saturday night we’ll see if Grasso is developing into a competitor like that as well.

ALAN JOUBAN VS NIKO PRICE
The Fight of the Night checks may already be written out for these welterweights, as Alan Jouban and Niko Price find it difficult – maybe even impossible – to be in a boring fight. Price has impressed in two UFC bouts thus far, but he is giving up a lot of Octagon experience to Jouban, who proved in his win over Mike Perry that he can take the foot off the gas and deliver a disciplined effort against an aggressive foe if necessary. Then again, “Brahma” still has that “You hit me and I’m going to hit you back” mentality, so this chess match could turn into a brawl at the drop of a left hook.

MARTIN BRAVO VS HUMBERTO BANDENAY
TUF Latin America winner Martin Bravo surprised some people with his finish of highly-touted Claudio Puelles in the season finale last November, and now he’s the one with the target on his back against another Peruvian in late replacement Humberto Bandenay. At 13-4, 1 NC, Bandenay doesn’t have the sparkling perfect record of Bravo, but he has been training in the States with Team Oyama and he’s approaching this fight with confidence that he’s going to score the upset. Should be interesting.

SAM ALVEY VS RASHAD EVANS
After three consecutive losses, Rashad Evans is in a similar spot to the one Chris Weidman was in a few weeks back when he faced Kelvin Gastelum. And as Evans told me recently, he wants that Chris Weidman feeling when he takes on Sam Alvey Saturday night. It is a pivotal fight for the former light heavyweight champion, and Alvey is a tough guy to look good against because he has that counterpunching style that forces an opponent to do the chasing if there’s going to be a fight. Evans will have to push the pace, stay busy, and when he’s not unleashing his right hand, he should mix in some wrestling to keep Alvey guessing. Evans has spent some time in Mexico City for this fight, so he should have the gas tank to outwork Alvey, but “Smile’N Sam” has the power to even things up with one punch.

ALEJANDRO PEREZ VS ANDRE SOUKHAMTHATH
Unbeaten in his last three bouts but still relatively unknown, Alejandro Perez can change that status this weekend when he opens the FS1 main card against hungry New England native Andre Soukhamthath, who nearly won his short notice UFC debut against Albert Morales but lost a split decision. With a full camp, he is determined to get in the UFC win column at Perez’ expense.
MORE FROM FIGHT NIGHT MEXICO CITY: Fantasy Preview | Pettis to make growing pains thing of past | Three fighters On the Rise

BRAD SCOTT VS JACK HERMANSSON
How did two European middleweights wind up in Mexico City? Who knows, but based on their recent efforts and determination to make their way into the top 15 at 185 pounds, Brad Scott and Jack Hermansson should deliver an exciting scrap for the fans.

DUSTIN ORTIZ VS HECTOR SANDOVAL
Hector Sandoval is seemingly getting better with each fight, but if he’s going to crash the flyweight rankings, he needs to keep that streak going against Dustin Ortiz. Ortiz has had a rough go of it lately, but his resume proves that he can pull off a big performance at any time, and he’s going to be hoping that Saturday night is one of those times as he looks to stay among the top 15.

HENRY BRIONES VS RANI YAHYA
Rani Yahya is one of the best groundfighters in the business. Henry Briones loves to fight. If these two facts play out again on Saturday, Yahya should pick up another submission victory. But if Briones is patient in his attacks and doesn’t get caught up in trying to brawl, it’s a whole new fight, one that Briones has the talent to win.

JOSE QUINONEZ VS DIEGO RIVAS
One of the most inspiring figures in the sport at the moment, Diego Rivas was battling cancer at this time last year. Tomorrow night, he’s a prizefighter again and looking to move to 8-0 against former TUF LATAM cast mate Jose Quinonez. Or should we say 9-0, because he already knocked cancer out? And regardless of the outcome of the fight, Rivas is already a winner.

JOSEPH MORALES VS ROBERTO SANCHEZ
Make sure you’ve got your UFC FIGHT PASS sub up to date and ready to roll, because in Joseph Morales and Roberto Sanchez, you’ll be seeing two of the top flyweight prospects in the world making their first walk to the Octagon. Urijah Faber has been raving about Morales for years, but Sanchez has an unbeaten record too and the ground game that can put a “1” in a loss column within seconds.

ALVARO HERRERA VS JORDAN RINALDI
Alvaro Herrera has never gone the distance – win or lose – in his career. That’s pretty much all you need to know about his fight with Jordan Rinaldi, that he’s going to bring it early and often in order to secure victory. It’s up to Rinaldi to take advantage of that aggression and turn it into his first UFC win.