TICKETS ON SALE SEPTEMBER 7, AT 10 AM 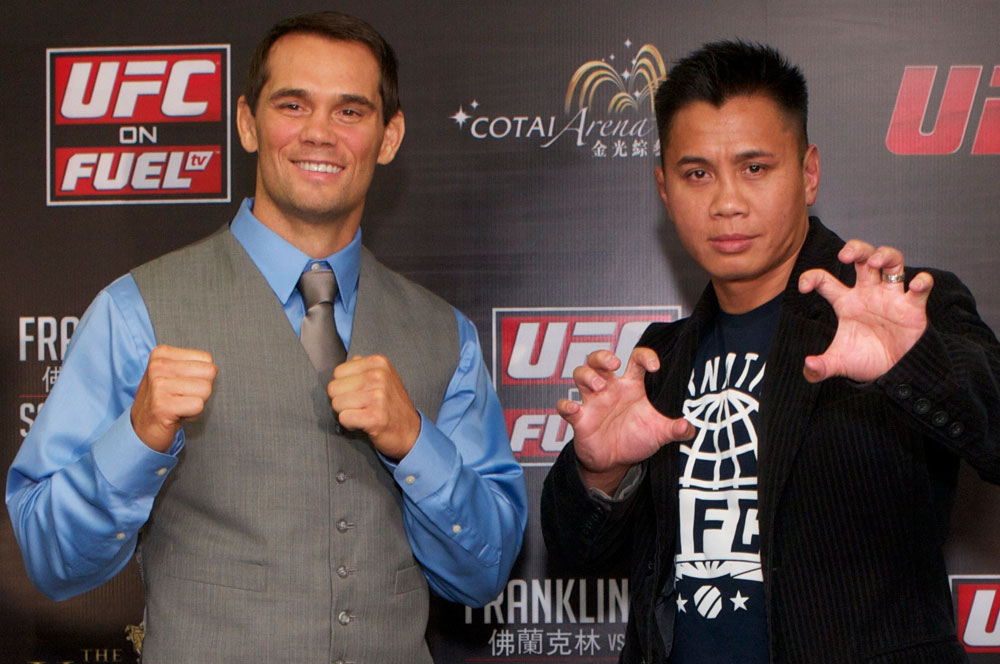 Vietnam-born American Cung Le has become a superstar in Asia - especially in China - due to his mastery of Sanshou and his skyrocketing film career, which inclues famous Hong Kong kung fu movies "Bodyguards and Assassins" and the yet-to-be-released movie "Grandmasters," directed by Wong Kar Wai.

Le will take on Rich “Ace” Franklin, a former high school teacher who has faced the best talent of the UFC over the course of his 13-year career, notching wins against Chuck Liddell, Wanderlei Silva, Matt Hamill and Yushin Okami. Yet Franklin has never faced a striker like Le, whose dynamic attack and flashy kicks dazzle fans and devastate opponents.

UFC® Macao will also feature South Korean MMA pioneer "Stun Gun" Dong Hyun Kim, in a pivotal welterweight bout against Brazil’s Paulo Thiago as well as a light heavyweight battle pitting unbeaten Bulgarian Stanislav Nedkov against Brazilian knockout artist Thiago Silva.  Befitting the occasion, the first UFC event in China will feature the first Chinese fighter ever to compete in the Octagon™, Tiequan Zhang. Known as “The Wolf” for his ferocious style, Zhang has already won in the Octagon against Jason Reinhardt in a fight that received more than 100 million online hits in China.

Le, Franklin, Kim and Zhang all appeared at a press conference today at the newly-launched Epic MMA Club in Hong Kong. UFC Asia Managing Director Mark Fischer unveiled the complete card and discussed the upcoming event to be held at the CotaiArena™.

The complete card is as follows:

“Our debut into Greater China is a huge milestone in the UFC history and demonstrates the immense popularity and acceptance of the sport on a global stage,” said Fischer.

“This is certainly one of the single biggest sporting events to ever hit the Hong Kong and Macao area and the global attention this event will receive pays tribute to the birthplace of martial arts. We are honored to hold our first event in China at the world-class CotaiArena in Macau.”

“Sands China is proud to bring UFC to greater China for the very first time,” says Edward Tracy, President and Chief Executive Officer, Sands China Ltd. “It’s another big step toward making Macao a world centre of tourism and leisure. Our CotaiArena is the top venue of its kind in southern China and is the ideal place for UFC. Ranked by Pollstar, it has hosted the world’s and Asia’s biggest names in music, sports and awards shows. We welcome the world’s most elite athletes to Macao to demonstrate the ultimate in sportsmanship at CotaiArena and Sands China continues its commitment – making Macao the number-one destination in Asia for world-class entertainment.”

UFC® MACAO: FRANKLIN VS LE will air live on numerous UFC broadcast partners in Asia and globally, as well as FUEL TV.