UFC London: On The Rise

Here’s a closer look at three athletes to pay close attention to on Saturday. This is the London 2019 edition of On the Rise.
By E. Spencer Kyte • Mar. 11, 2019

For the fourth consecutive year, the UFC is making a first quarter foray across the Atlantic to bring a fight card to the O2 in London.

Over the last three years, several combatants set to enter the Octagon this weekend have delivered strong performances, including Danny Henry, Marc Diakiese, and Danny Roberts. Saturday’s co-main event tandem of Leon Edwards and Gunnar Nelson have also enjoyed tremendous success in the UK capital, as the former looks for his third straight victory in the city after registering wins over Vicente Luque and Peter Sobotta over the last two years, while the latter is 3-0 in the UFC and 5-0 overall fighting in the London.

These events have historically been a launching pad for some of the top emerging European talent competing in the UFC as well, and this weekend should be no different.

Here’s a closer look at three athletes to pay close attention to on Saturday.

This is the London 2019 edition of On the Rise.

Aptly dubbed “The Prospect,” the 25-year-old Wood has scored impressive victories in each of his first two Octagon appearances. In his debut, the former Cage Warriors bantamweight champion submitted Brazilian veteran Johnny Eduardo before following it up with a one-sided win over Andre Ewell in his sophomore showing.

This weekend, Wood makes his third trip into the UFC cage with a main card assignment opposite Jose Quinonez. The former TUF Latin America contestant has been limited to a single appearance in each of the last four years, but to his credit, “Teco” has emerged victorious each time.

Quinonez represents a moderate step up in competition for Wood and a great opportunity to get a better read on just how far up the divisional ladder Brad Pickett’s protégé could climb, both this year and beyond.

Thus far, Wood has shown a tremendous mix of skills and the toughness required to excel at this level. He has displayed sound finishing instincts throughout his career and the ability to stay composed and play to his strengths when he has a clear advantage, both of which are underrated, but crucial, elements for emerging hopefuls to possess. He’s also already dealt with adversity on the UFC level and knows what it’s like to lose, two more things that often influence the rate at which a prospect climbs the ranks.

If Wood can push his overall winning streak to eight with a win over the durable and dangerous Quinonez on Saturday, he’ll join the ever-growing list of up-and-coming fighters to track in the highly competitive bantamweight division. 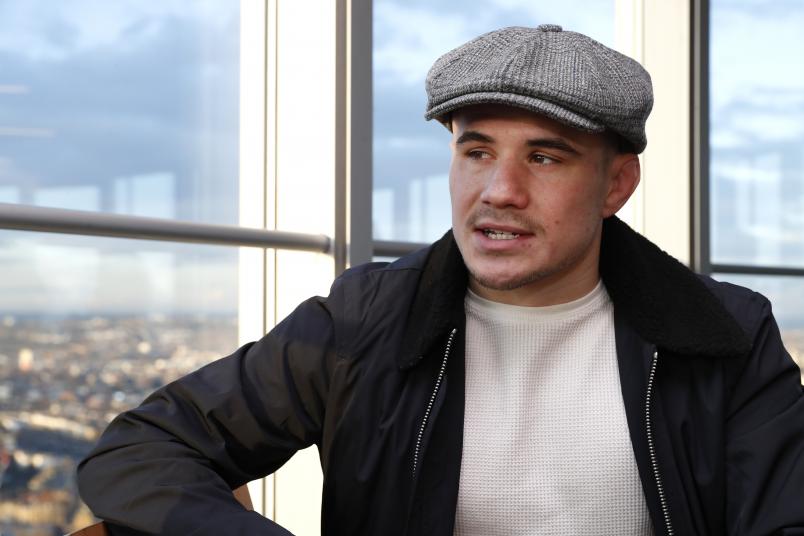 LONDON, ENGLAND - JANUARY 30: Nathaniel Wood of England poses for a photo during the UFC press conference at BT Tower on January 30, 2019 in London, England. (Photo by Luke Walker/Zuffa LLC/Zuffa LLC)

LONDON, ENGLAND - JANUARY 30: Nathaniel Wood of England poses for a photo during the UFC press conference at BT Tower on January 30, 2019 in London, England. (Photo by Luke Walker/Zuffa LLC/Zuffa LLC)

Though much older than most fighters featured in this space, the 36-year-old Brazilian is no less deserving of mention after returning from an almost four-year absence last May with a first-round submission win over Nordine Taleb in Liverpool.

Silva, who has fought almost exclusively in England, began his career well over a decade ago and carries a 12-fight winning streak into his matchup with Danny Roberts on Saturday. Included in that run are wins over regional vets Jean-Francois Lenogue and Xavier Foupa-Pokam, as well as a split decision triumph over the now-surging Edwards in 2014.

While he’s only made three previous appearances inside the Octagon and there was a lengthy hiatus between his second and third bouts, no one should discredit what Silva has accomplished to date, as winning 12 straight fights at any level is a difficult task. Now that he seems to be back competing at more regular intervals, “Hannibal” has a chance to make some waves in the welterweight ranks.

Roberts is an aggressive, “kill or be killed” fighter who has gone 5-2 in his first seven UFC appearances and enters Saturday’s meeting with Silva on a two-fight winning streak. His pressuring style and willingness to exchange should give the Brazilian plenty of opportunities and if Silva can find a way to secure another win, we could see the veteran earn a greater push in the always competitive 170-pound weight division going forward.

A new addition to the featherweight ranks, Grundy carries an 11-1 record and eight-fight winning streak into his promotional debut against Nad Narimani in the opening bout of Saturday’s 12-fight card.

A bronze medalist in freestyle wrestling at the 2014 Commonwealth Games, the 32-year-old has earned high praise from the coaches and fighters at Team Kaobon, including recent welterweight title challenger and Saturday’s headliner, Darren Till. After suffering the lone loss of his career to UFC veteran Damian “Webster” Stasiak just under four years ago, Grundy has bounced around, piling up wins, using his superior grappling skills to create submission opportunities and grind out victories.

His pairing with Narimani is an opportunity to establish a solid baseline as he begins his UFC journey, as the 31-year-old Team Alpha Male representative has won five straight overall, including each of his first two appearances inside the Octagon.

Narimani is at his best when he’s utilizing his wrestling, as he showed last time out against Anderson dos Santos. But that’s where Grundy excels as well, which makes this a chance for the UFC newcomer to showcase his world-class pedigree and pick up the biggest win of his career.