JIMI MANUWA VS COREY ANDERSON
An important light heavyweight matchup headlines this Saturday’s event in London, with the No. 3-ranked Manuwa getting a home game against the No. 6-ranked Anderson. In a thin light heavyweight division, it’s not out of the realm of possibility that the winner could be a victory away from a title shot, so stakes are high as Manuwa seeks a knockout and Anderson looks to parlay his grappling attack into a win.

GUNNAR NELSON VS ALAN JOUBAN
Alan Jouban has always been a must-see when it comes to action fights, but in his recent win over Mike Perry, he showed that he can also stick to a game plan. That’s the kind of evolution that will serve him well against Iceland’s Nelson, a patient fighter who waits for an over aggressive opponent to make a mistake. If Jouban can be just as disciplined as he was against Perry, he has the tools to pull off the upset.

BRAD PICKETT VS MARLON VERA
One of England’s most beloved warriors makes his final walk to the Octagon this Saturday, and knowing Brad Pickett, he will make sure he goes out swinging against Marlon Vera. Of course it would be the Hollywood ending for Pickett to go out with a win and another Performance bonus, but the hungry Vera has no problem playing spoiler, and while the focus is on “One Punch,” this fight is just as big for the Ecuadorian prospect.

ARNOLD ALLEN VS MAKWAN AMIRKHANI
If there was one fight on this card that most diehard fans want to see, it’s probably this one. Allen and Amirkhani are 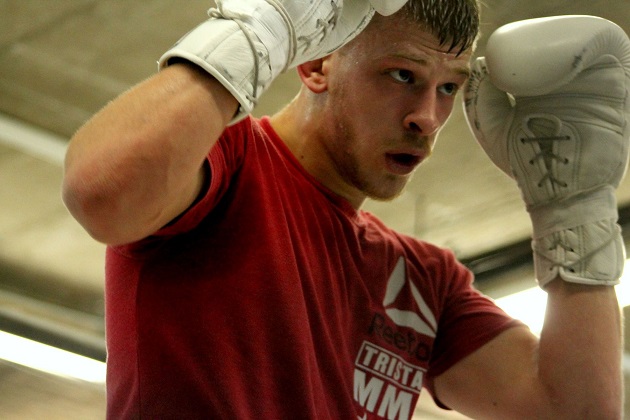 two of the top rising stars on the European MMA scene, and after positive showings in the Octagon thus far, this is their chance to make a wider impact in a featherweight division that is growing more interesting by the minute.

JOE DUFFY VS REZA MADADI
“Irish” Joe Duffy makes his long awaited return on the day after St. Patrick’s Day, and while Reza Madadi will attempt to keep Duffy’s fans from continuing the celebration from the night before, this is a perfect opportunity for Duffy to remind the world just why he’s seen as one of the top talents emerging in the 155-pound division.

DARREN STEWART VS FRANCIMAR BARROSO
Darren Stewart was not happy with the way his first fight with Francimar Barroso ended last November, and he’s still fuming about the no contest verdict. So expect to see him roar out of his corner at the start and look to put it on Barroso immediately. Of course, that could play into the veteran’s hands, making this either an interesting chess match or a quick blowout win for “The Dentist.”
RELATED CONTENT: London Fantasy Preview | Three fighters On the Rise | Under-the-Radar fights | Reasons to Watch

DANIEL OMIELANCZUK VS TIM JOHNSON
Tough one to call in the heavyweight division, as Omielanczuk and Johnson have many of the same traits, key among them being toughness. Expect a three-round war of attrition here, with Johnson holding a slight edge over the steel-chinned Poland native.

LEON EDWARDS VS VICENTE LUQUE
The further you look at this card, the more you realize just how good it is, and this is another example why UFC FIGHT PASS subscribers are smiling. Luque is on a torrid hot streak with four consecutive finishes, and Edwards is coming off the biggest win of his career over Albert Tumenov. By the end of the year, one or both of these welterweights should be knocking on the door of the top ten or in it already, so enjoy this clash of prospects now.

MARC DIAKIESE VS TEEMU PACKALEN
British sensation Marc Diakiese has impressed in his first two Octagon bouts, and on Saturday we’ll see if a training camp with the gang at American Top Team has served him well. If he keeps it standing against submission ace Teemu Packalen, “Bonecrusher” has the edge, but if it hits the mat, Packalen has the ground game to end things in a hurry. Another fun matchup.

TOM BREESE VS OLUWALE BAMGBOSE
Tom Breese makes his middleweight debut following the first loss of his career to Sean Strickland at 170 pounds, and fans can’t wait to see if he’s going to be the same fearsome force he was shaping up to be after his first three UFC wins. If anything, he won’t have much time to get acclimated to 185 pounds, as New York’s Oluwale Bamgbose will be in his face and swinging for the cheap seats from the start. I guess there’s no better way to test your chin in a new division than by getting hit by a middleweight seconds into the fight.

IAN ENTWISTLE VS BRETT JOHNS
Ian Entwistle could lose 20 fights in a row and I would still want to watch him fight because he is a submission artist who goes for it from the time the Octagon door closes until the bout ends. And if he gets your leg, it’s trouble. That scouting report has likely been pounded into the head of Wales’ Brett Johns leading up to Saturday night, so it will be interesting to see if the hot prospect can keep his cool in the scrambles that Entwistle lives for.

BRADLEY SCOTT VS SCOTT ASKHAM
An all-England turf war is on tap in the middleweight division, and this is another tough fight to call. Askham has looked spectacular at times and average at others in the UFC, but if he’s found consistency in his fight game, he’s a tough out for anyone at 185 pounds. The same could be said for Scott, who has been plagued by inactivity since debuting in the Octagon in 2012. He has the tools to compete at this level; now we just need to see him more than once a year.

LUCIE PUDILOVA VS LINA LANSBERG
Lina Lansberg didn’t get an easy assignment in her UFC debut last year, as she was matched up in a 140-pound catchweight bout against Cris “Cyborg.” Despite the odds, Lansberg put in a gritty effort before being stopped, and in her second trip to the Octagon, she’ll be doing so at bantamweight against an opponent she’s already defeated in Lucie Pudilova. But if this is supposed to be a gimme, think again, as Pudilova has won three straight since her first bout with Lansberg, and what better way to even the score than in her UFC debut?