UFC Live: Sanchez Beats Kampmann, Still Has Some “Nightmare” In Him

Click below for the UFC on Versus main card report... 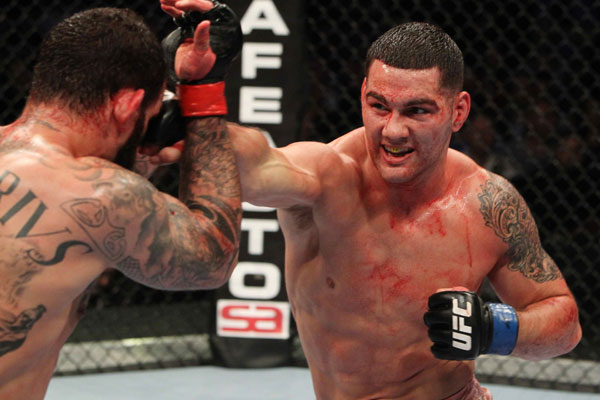 LOUISVILLE, March 3 – He calls himself “The Dream” now, but the fighter formerly known as the “Nightmare” still hasn’t lost the ability to dig deep and deliver a jaw-dropping performance, and Diego Sanchez did just that in a punishing three round war with Martin Kampmann that saw the Albuquerque native and former Ultimate Fighter winner take a razor-thin unanimous decision victory.

Sanchez vs. Kampmann
Scores were 29-28 across the board for Sanchez in what was easily Fight of the Night and an early Fight of the Year candidate. See post-fight interiew

After trading quick flurries of standup strikes, Sanchez looked for a takedown in the second minute only to be turned away at the door, by Kampmann, who proceeded to nail his foe with a knee and a quick right to the head that produced a flash knockdown. Sanchez recovered rapidly, but Kampmann continued to stuff his takedown attempts, and the ensuing strikes to the face bloodied Sanchez’ lip and the bridge of his nose.

Still determined to get the fight to the mat, Sanchez chased Kampmann in the early stages of round two, but he was still coming up short. On the other hand, Kampmann’s pinpoint accurate strikes had now opened a cut under Sanchez’ right eye. But Sanchez kept pressing, and soon Kampmann was bleeding from a cut around his right eye, and Sanchez opened up with both hands as he got Kampmann against the fence, drawing a roar from the crowd. Kampmann responded with some hard 1-2s back, but Sanchez had the last word with a furious flurry before the bell.

Sanchez started to get even closer with his hooks in the final round, and he jarred his opponent with thudding shots. The takedowns still weren’t getting done, but Kampmann wasn’t matching Sanchez’ success rate standing anymore. With a little more than two minutes remaining, Sanchez finally got his takedown, but Kampmann quickly got back to his feet. Sanchez wasn’t going to be denied though, and in the final minute, despite a new cut under his left eye, he fired away with reckless abandon until the bell, capping off a memorable war that few in attendance will forget anytime soon.

Dollaway vs. Munoz
What was expected to be a pitched 15 minute battle instead turned into a defining win for middleweight contender Mark Munoz, who lived up to his nickname “The Filipino Wrecking Machine” by finishing off CB Dollaway by TKO in just 54 seconds. Watch post-fight interview

Dollaway started strong, landing with a leg kick before scoring a quick takedown. The fighters scrambled back to their feet, but seconds later, Munoz rocked Dollaway with a right hand and sent him to the canvas. Munoz immediately moved in for the finish and he got it, with two more flush right hands bringing in referee Mario Yamasaki to halt the bout.

Sakara vs. Weidman
A star may have born in the middleweight division, as Long Island’s Chris Weidman lived up to all the pre-fight hype about his UFC debut and scored a dominant three round unanimous decision over Alessio Sakara. Watch post-fight interview

And he did it on two weeks’ notice, replacing Rafael Natal against “Legionarius”.

Weidman was busy from the opening bell, scoring with kicks to the leg and punches upstairs that cut Sakara over the right eye. Sakara’s takedown defense was solid as he kept the former Hofstra All-American from getting him to the mat, but Weidman kept pressing the action. With under two minutes left, Sakara ripped off a solid flurry of punches to the body and head, but his sporadic activity wasn’t going to be enough to win the round.

Using a single leg, Weidman opened the second with a takedown of Sakara, and he proceeded to work his strikes, opening a gash on Sakara’s forehead. Weidman then moved to side control, where he continued to make the Italian’s night miserable. With two minutes left, Sakara finally sprang into action, getting to his feet and firing off strikes at the UFC newcomer. Weidman weathered the attack and bulled Sakara to the fence, and after a brief stalemate, referee Gary Copeland halted the bout to have the Octagonside physician inspect Sakara’s cuts. After getting the green light, Sakara re-engaged, but it was Weidman who finished strong again.

Sakara dug to the body in round three, hoping to slow Weidman down, but moments later he got a trip to the mat for his trouble. Again, Weidman dominated with short forearms to the face, and Sakara simply had no answers for the New Yorker. With a little more than two minutes left, Copeland stood the fighters, but Sakara wasn’t upright long, as he got taken down and pinned to the mat, where he was stranded for all but a few seconds of the remainder of the bout.

Bowles vs. Page 2
Former WEC bantamweight champion Brian Bowles made a triumphant return after a year-long layoff due to injury, submitting Damacio Page for the second time in two tries via guillotine choke in the UFC debut for both men. Watch post-fight interview

“That’s my signature move,” said Bowles, who earned a $40,000 bonus for Submission of the Night. “I hit it all the time in the gym. He was out for a second. I didn’t want to hold on to it too long and hurt him.”

Page was firing wildly with his fists and feet to open the bout, using anything at his disposal to rattle Bowles. The Athens, Georgia product stayed calm though, getting Page’s attention with a thudding 1-2. As the round progressed, the fighters settled into a groove, with Page stalking and Bowles countering well. A furious exchange then broke out, with Page hitting the mat and Bowles following him. Bowles went on to sink in a guillotine choke and it was lights out for Page, who was rescued at the 3:30 mark, the same time Bowles finished him in with a guillotine choke the first time they fought in August of 2008.

“I knew I had him hurt when he went to the ground, and I knew I had to stay composed and make sure I took advantage of the opportunity,” said Bowles.