Click below for the UFC on Versus 3 prelim report... 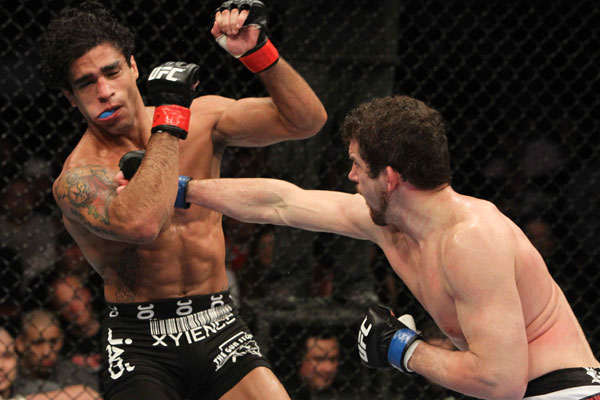 LOUISVILLE, March 3 – After a number of stops and starts, former WEC light heavyweight champion Steve Cantwell finally returned to the Octagon Thursday night at the KFC Yum! Center, but he may have wanted to stay on the sidelines considering the one-sided thrashing he took at the hands of Cyrille “The Snake” Diabate, who defeated the Las Vegan with a shutout three round decision.

Diabate’s kicks were on target immediately, and “The Snake” made sure he caught Cantwell to the head, body, and legs. With 1:30 gone, Cantwell got tired of this pattern and caught one of the kicks, sending Diabate down to the mat. After a brief stay on the canvas, Diabate got back to his feet and went back to work. Cantwell’s timing was definitely off after the long layoff, and Diabate made him pay, dropping him with a left uppercut just before round’s end.

Between rounds, the Octagonside physician took a look at Cantwell, but allowed the fight to continue. In response, Cantwell showed a bit more urgency as he came out for round two, but Diabate was still on target with his strikes as Cantwell came up empty. The fight soon strayed to the canvas, and Diabate got some ground strikes off before backing up and letting his foe up. Diabate continued to tee off on Cantwell, even taking his back and landing strikes after showing some solid takedown defense. When the two rose, Diabate again hurt Cantwell with his uppercuts, and while Cantwell was game, he was outgunned by the Frenchman.

There was no change to the pattern of the previous two rounds in the final frame, and even as Diabate dropped his hands, Cantwell – game to the end – was unable to capitalize.

Stevenson vs. Castillo
Former WEC standout Danny Castillo was on top of his game in his bout against Joe Stevenson, as he scored a hard-fought three round unanimous decision win to notch his first UFC victory. Watch post-fight interview

Castillo’s first takedown attempt was turned back by Stevenson, who locked his foe up and fired off some knees to the head. Castillo (11-3) escaped this precarious position, only to get lifted and slammed by the former lightweight title challenger. Castillo was able to make it to his feet, but he got caught in a guillotine choke. This time, it was Castillo’s turn to slam his way out of trouble, and after getting back to his feet, he was able to separate and get back to working his standup. Another takedown attempt from Castillo was successful, but Stevenson (36-13) fought loose and returned to the standup game. Castillo scored well while the two stood, apparently getting stronger as the round progressed.

Working his long-range striking game to perfection early in round two, Castillo kept Stevenson at bay until “Joe Daddy” scored with a slam and got the fight back to the mat. Castillo initially tried to keep his foe tied up, but as Stevenson fired away, Castillo responded with his own strikes from the bottom. A knee to the head by Castillo while Stevenson was down brought a brief halt to the action, with little of consequence happening before the bell tolled.

Castillo continued to impress in round three, as Stevenson looked to find a way to break the fight open in his favor. With a little over two minutes left, he locked in his trademark guillotine choke and tried to finish, but Castillo was able to slip free and get back to his feet, where he bulled Stevenson into the fence before taking him down. Again, Stevenson rose, but Castillo was not about to let him loose, and another takedown finished off the performance for “Last Call.”

The defeat was Stevenson’s third in a row and fifth in his last seven bouts.

Tavares vs. Roller
WEC veteran Shane Roller made a successful UFC debut in lightweight action, knocking out Thiago Tavares in the second round. Watch post-fight interview

“That was the first knockout I’ve ever had in a fight,” said Roller, who earned a $40,000 Knockout of the Night bonus for his efforts. “It felt perfect. I knew it as soon as I landed the punch.”

Roller was the aggressor throughout the opening round, but it was Tavares’ crisper shots that got the job done, especially when a left hook rocked Roller and knocked him into the fence with 2:20 left.

In the second round though, Roller found his range and drilled Tavares with a straight right hand that dropped the Brazilian hard to the mat. The follow-up shot was just window dressing as referee Mario Yamasaki stopped the fight at the 1:28 mark.

Mizugaki vs. Duran
Japan’s Takeya Mizugaki got a handful from late replacement Reuben Duran, but the bantamweight contender was able to hold off the newcomer for a close split decision win. Watch post-fight interview

Duran was unrattled in his first round in the Octagon as he stood in the pocket and took whatever Mizugaki threw at him while returning fire with flurries that got his opponent’s attention throughout the opening stanza.

Mizugaki’s second round got bad fast as he sported a sizeable knot under his right eye as Duran pecked away at him. Mizugaki kept moving forward though, and midway through the round he began tagging Duran more regularly before taking him to the canvas. With a minute left, Duran got to his feet, with Mizugaki still attached to him, throwing knees. When Duran went to retaliate, he got another trip to the mat, but he made it back up just before the bell.

In the opening two minutes of the final round, Duran got off some solid kicks, but Mizugaki responded with one of his seemingly unstoppable takedowns. This time, as he pinned Duran against the fence, he was busier with the strikes than he was previously, well aware that a dominant round could seal the round and the fight for him. With a little more than a minute remaining, Duran rose to his feet and tried to strike while being locked up, but Mizugaki had the solution, another takedown. Duran would not go away quietly though, as he stood and emptied his gas tank in an effort to pull out the win.

“This is probably one of the happiest days of my life right now,” said Yang. “I’m not really surprised that I was able to impose my will. My game is ground-and-pound, so I wanted to go step-by-step and control the fight.”

After a solid start from Kimmons, Yang immediately turned things around with a straight left that dropped “The Rosedale Reaper” 45 seconds in. From there, Yang pulled out all the stops with arm triangle and kimura attempts along with two-fisted ground and pound, and only Kimmons’ heart kept him in the fight.

Yang again was the aggressor to start round two, but Kimmons responded with a throw of his foe that drew a roar from the crowd. Yang recovered well, working his way into side control before taking Kimmons’ back. The pace dipped as Yang became more selective with his strikes, but now each punch mattered, and Kimmons’ ability to rebound was dwindling with every shot. Finally, after a series of unanswered blows, referee Gary Copeland decided that he had seen enough, and he called the bout at 4:47 of the round.

With the win, Yang, who lost his UFC debut to Chris Camozzi last October, improves to 10-1; Kimmons falls to 23-7.

Palhares vs. Branch
Brooklyn middleweight Dave Branch held off leg lock master Rousimar Palhares for one round, but in the second, the Brazilian closed the show, winning via submission for his fourth victory in his last five bouts. Watch post-fight interview

Palhares’ first attempt to bring the fight to the mat almost ended the bout, as Branch’s solid defense of the takedown led him into an armbar attempt from the Brazilian. Branch (8-2) fought off the submission and found his way into Palhares’ guard, where he was again forced to defend armbar and triangle tries. With 40 seconds left, Palhares (21-3) found what he wanted in a scramble as he grabbed Branch’s foot, but it was the New Yorker who got the crowd on his side as he escaped the submission and ended the round with a series of unanswered ground strikes.

Branch held off Palhares in the early stages of round two, but with 90 seconds gone, “Toquinho” took Branch down and immediately took his foot. This time, Branch wasn’t able to escape, and he was forced to tap out to the kneebar at 1:44 of the frame.

Pokrajac vs. Brown
Igor Pokrajac’s superior striking was on display in the light heavyweight opener, as he used a combination of kicks, knees, and punches to stop Indiana’s Todd Brown at the end of the first round. Watch post-fight interview

The end came after Brown, cut over the left eye and then dropped by a knee late in the round, took a series of unanswered punches on the mat and was unable to continue, prompting referee Chris Kinman to halt the bout at the 5:00 mark.