Read below for the UFC Live 6 prelim card report... 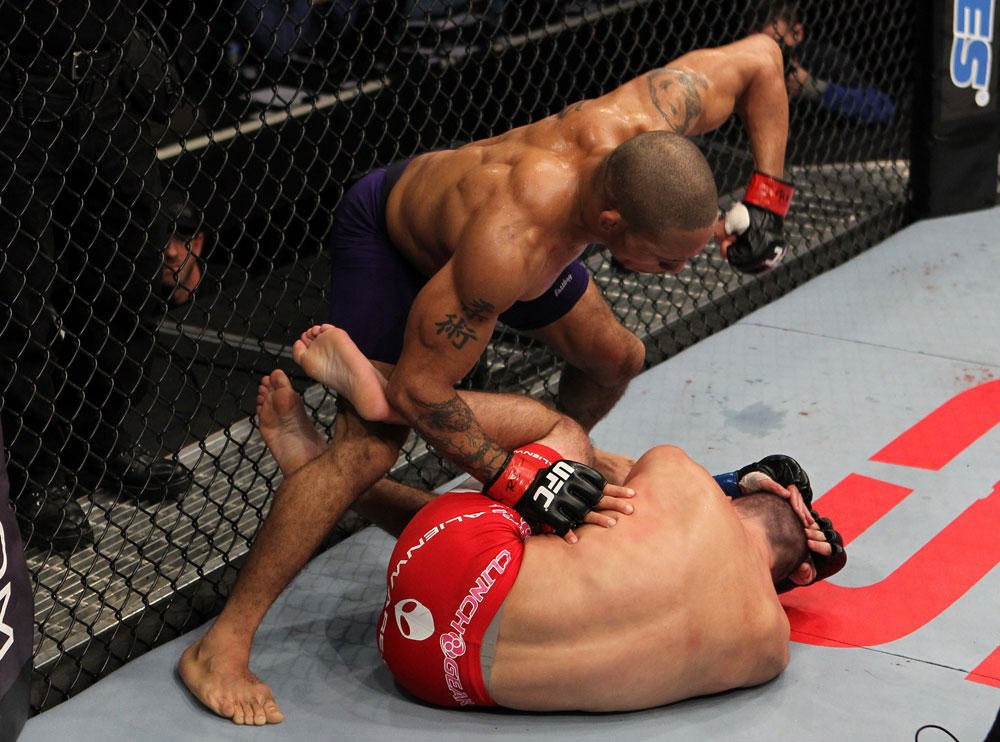 WASHINGTON, D.C., October 1 – A 10-year journey for D.C.’s own Mike "The Hulk" Easton finally reached the UFC Octagon, and the bantamweight marched full speed ahead in his debut at the Verizon Center Saturday night, chopping down and then stopping Byron Bloodworth in the second round of their UFC Live prelim bout. See post-fight interview

After an energetic entrance into the Octagon, Easton stayed busy with plenty of motion, but little in the way of actual scoring. Bloodworth wasn’t able to compile anything of note either, but a couple solid strikes from the local favorite may have allowed him to take the round.

Stalking with a little more in the way of bad intentions, Easton drilled Bloodworth with leg kicks as the second round opened, and with two minutes gone, it was clear that the shots were starting to take their toll on the late replacement for the injured Jeff Hougland. As the round was coming to a close, the two locked up near the fence, and in what is usually a safe zone in terms of power shots, Easton turned up the heat with a series of right knees, first to the head and then the body, putting a hurt Bloodworth on the canvas. A series of follow-up strikes ended the bout, with referee Kevin Mulhall calling it at the 4:52 mark.

Veteran lightweight Yves Edwards got back in the win column following his June loss to Sam Stout, using a varied striking attack to halt Brazil’s Rafaello Oliveira in the second round. See post-fight interview

Oliveira came out as the aggressor, throwing wild strikes, one of which opened a cut over Edwards’ right eye. The veteran was unfazed, and as the round wore on, he began warming up, landing with hard kicks to the legs and body and adding punches upstairs and down just before the bell.

Taking the same tact in round two, Oliveira appeared to rock Edwards with his punches to the head, but as the Brazilian moved in to press his advantage, a knee from Edwards forced him to the canvas and to reset. Moments later, with his legs under him, Oliveira was hurt again and dropped by a punch. He survived an initial onslaught, but after rising and jumping back into the fray, a left head kick sent him down a third time. After a series of unanswered blows, referee Mario Yamasaki called a stop to the bout at the 2:44 mark.

Unbeaten Liverpool tap out king Paul Sass made it two for two in the UFC, finishing The Ultimate Fighter season 12 finalist Michael Johnson with a heel hook in the opening round of their lightweight bout. See post-fight interview

Sass didn’t hide his intentions as the bout began, rushing Johnson (10-6) in search of a takedown that was turned away a number of times. In the process, Johnson made sure his opponent paid for every missed attempt, but the gutsy Brit wouldn’t let up in his quest. Midway through the round, the bout strayed to the mat, with Sass locking up the leg of “The Menace.” Moments later, at the 3:00 mark, Sass’ heel hook forced the tap, upping his perfect record to 12-0.

Canada’s TJ Grant made a successful jump to the 155-pound weight class, submitting Shane Roller in the third round of an entertaining scrap that saw plenty of back-and-forth action on the mat and the feet. See post-fight interview

After eating some of Roller’s thunder early, Grant shot in for a takedown, but nearly got caught in a guillotine choke. Grant pulled off a slick reversal to get into side control, then Roller did the same thing moments later, with the fans loving every second of it. Midway through the round, Grant rose and fired off strikes from the top position, eventually settling into his opponent’s guard. After another guillotine attempt from Roller, Grant pulled free and again took the dominant position, finishing strong with strikes.

Grant (17-5) rocked Roller with a knee to the head in the opening stages of round two, with Roller returning the favor with his punches. A subsequent guillotine attempt from Roller came up empty, again allowing Grant to take the top spot against the Dallas resident. With less than 90 seconds remaining, Roller reversed position, but it was Grant almost locking up an arm at the bell.

Roller (10-5) showed an increased sense of urgency in the final round as he looked to catch Grant with one of his power shots, but it was Grant landing the telling blow, a straight right to the face. With a little over three minutes left, Roller shot in for a takedown and Grant almost caught him with a guillotine, but after powering out, an armbar attempt followed. In the midst of it, referee Fernando Yamasaki called a stop to the bout at the 2:12 mark due to a verbal tapout, incensing Roller and the fans in attendance.

“I ended up in the armbar,” said Roller. “I was trying to defend it, it got locked up tight, and the ref stopped it.”

“He made a sound like ‘arrgh.’ They told us before the fight that you can’t do that, that they’re going to stop the fight,” said Grant, giving his side of the closing sequence.

Welterweight veteran Josh Neer returned to the UFC with an impressive display of elbow strikes which cut Keith Wisniewski and brought a halt to their exciting bout at the end of the second round. See post-fight interview

Neer got what he wanted in the first round, as Wisniewski had no issue standing with him for the entire five minute period. But while “The Dentist” was able to jump into the lead behind a furious body attack and close range elbows, his apparent disregard for the power of his fellow Midwesterner left some defensive openings that Wisniewski was able to take advantage of.

Wisniewski (28-12-1), also making a return visit to the Octagon, closed the gap early in round two and began his own body assault, but Neer’s continuous use of elbows to the head quickly bloodied his foe, prompting a break in the action for the doctor to look at the cuts on the Indiana native’s face. After getting cleared to resume, the bout remained in limbo as Neer’s lost mouthpiece got lodged in the grill around the Octagon.  When finally brought back together, Neer and Wisniewski picked up where they left off, with neither fighter willing to back down. With seconds remaining, Neer almost finished the bout with a guillotine choke, but the bell intervened. The doctor had seen enough though, calling a stop to the bout between rounds due to the severity of Wisniewski’s cuts.

“That was for my Grandpa, he’s one of the toughest guys I know,” said Neer of his grandfather, who is battling cancer.

In a battle of bantamweight newcomers, Walel Watson introduced himself to UFC fans in impressive fashion, stopping previously unbeaten Joseph Sandoval via strikes in the opening round. See post-fight interview

Watson’s striking was sharp from the start, with the only deviation being a low kick the briefly interrupted the action. After the fight resumed, Watson began delivering his strikes upstairs, with a right kick to the head dropping and stunning Sandoval. The Texan shot right back up to his feet, but Watson wouldn’t let him breathe, eventually sending him to the canvas a second time with a right-left. This time, referee Mario Yamasaki had seen enough, halting the bout at the 1:17 mark.