Read below for the UFC Live 6 main card report... 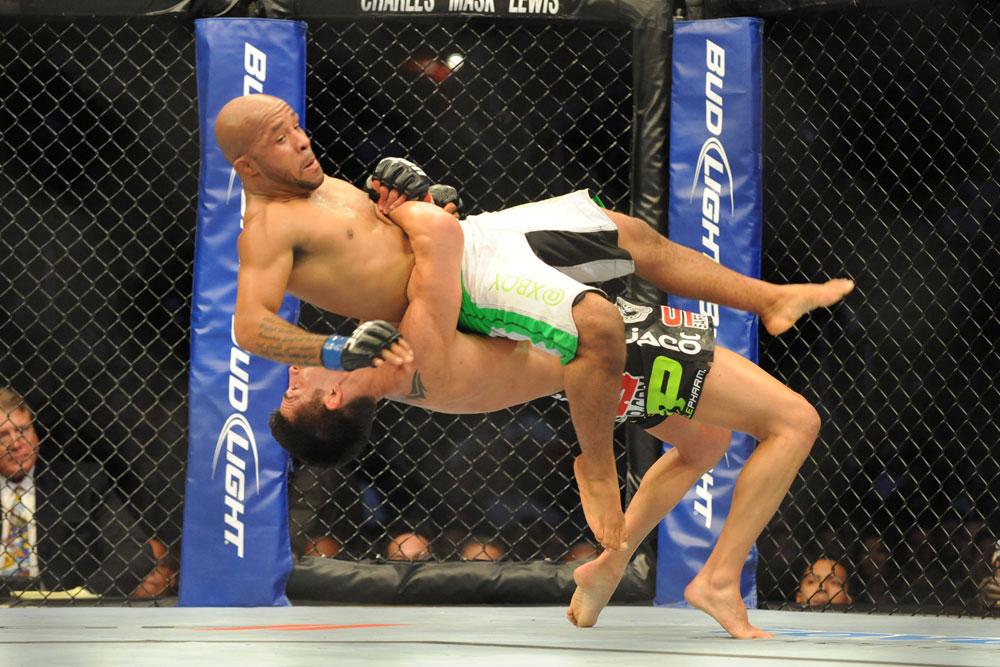 WASHINGTON, D.C., October 1 – Unbeaten in nine fights at 135 pounds, Dominick Cruz has established himself as the bantamweight gold standard, and after a competitive, but near shutout, unanimous decision victory over Demetrious Johnson in the UFC Live main event at the Verizon Center Saturday night, he is rapidly on his way to cleaning out the division. See post-fight interview

A hard right hand opened the scoring for Cruz, with his striking keeping Johnson from getting too close. The challenger used his own wild strikes to get in range for a takedown, but that initial shot was turned back by Cruz, who went on to score his own takedown. While on the mat, Cruz controlled position, bulling his foe into the fence before the two rose with a little over two minutes left. Johnson immediately went on the attack, but Cruz caught a high kick for another takedown. After standing, Johnson got his first takedown, but Cruz immediately rose. A lockup against the fence ensued, followed by some feverish striking action in the closing moments.

An early miss from Cruz to open round two allowed Johnson to get off a flurry of punches, yet Cruz quickly regained his footing and put the bout on the mat for a few seconds. Once standing, Cruz continued to control the close range grappling, yet Johnson kept pressing, landing with some leg kicks to remain in the scoring column. In the final minute, the fighters traded takedowns, with Cruz’ the more substantial of the two since he was able to keep his foe pinned until the bell.

In round three, there was a more measured assault from both men while standing, but Cruz changed all that when he was able to get Johnson’s back and then suplex him. The move drew a roar from the crowd, but there was even more of a response when Johnson escaped Cruz’ rear naked choke attempt and got back to his feet. Cruz, not discouraged in the slightest, took Johnson back to the canvas, continuing to pile up the points in the process. In the final 20 seconds, Johnson was able to get himself upright, ending the round on his feet.

The challenger showed no signs of fatigue as he chased after Cruz in round four, the champion barely slowing down either as he looked to counter. Two minutes in, Cruz got his by now customary takedown, keeping Johnson against the fence. Cruz soon worked his way into the mount position, Johnson soon working himself free and to his feet. For the first time, Cruz began to look tired as he took a couple deep breaths. He wouldn’t stop pressing though, and a takedown ensued before the two rose and scrapped on the feet until the end of the stanza.

Going for broke to begin round five, Johnson’s aggressiveness allowed Cruz to pull off another thunderous throw. The champion’s subsequent control on the mat smothered Johnson, who was simply unable to break loose. At the midway point of the round, Johnson got back to his feet and eventually broke Cruz’ grasp, but his punches were having little effect on the elusive San Diegan. By this time, Johnson had a growing knot on his left cheek, but he kept moving forward. A late takedown and some hard strikes punctuated the hard-fought bout for the champion though, leaving little doubt as to who the winner was.

“I put in a lot of work and it was a tough fight,” said Cruz. “The kid’s got a sick pace, so I had to outwrestle him.” 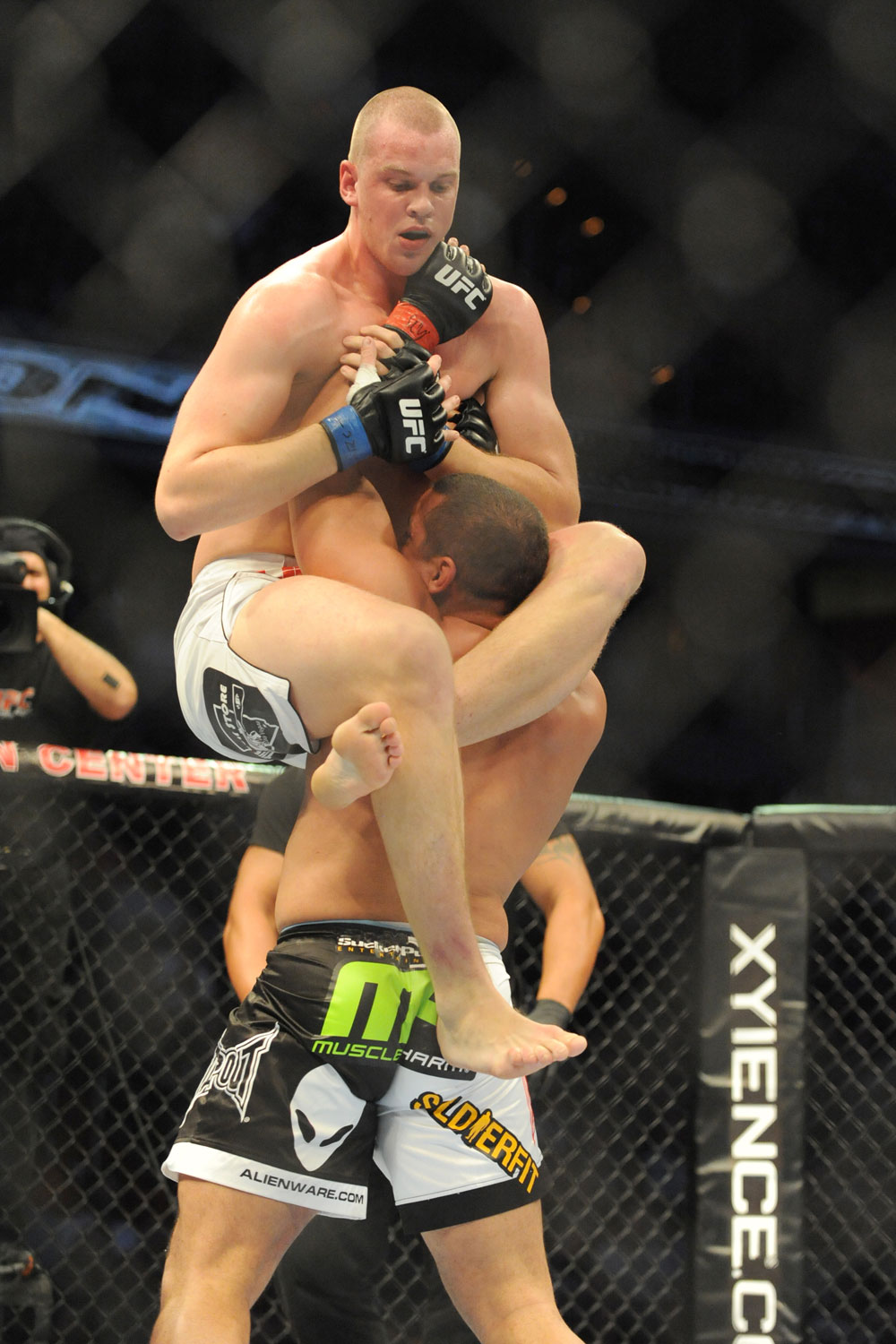 Much was made of the one foot height difference between 6-11 Stefan Struve and 5-11 Pat Barry, but in the end, it was technique, not size, that mattered in the heavyweight bout, as Struve submitted Barry in the second round. See post-fight interview

If the size difference between the two wasn’t evident before, it really showed up when the bell rang and the fighters squared off. Barry began firing kicks at Struve’s legs almost immediately, tossing in the occasional punch as well. With the crowd beginning to get restless at the lack of sustained action, Struve began to get his own striking game in gear, with a couple front kicks just missing the mark.  A wild flurry of activity ended the round, with Struve holding a slight edge.

The action picked up in round two, with Struve throwing head kicks and Barry trying to score with uppercuts and a head kick of his own before going back to leg kicks that reddened the inside of Struve’s left leg.  After a quick close range flurry, Struve found the opening he needed as he looked for a guillotine choke and pulled guard. Barry deftly escaped, but the long-limbed Struve locked on a triangle choke. Barry lifted his foe high in the air and attempted to slam his way out of the maneuver, but Struve held on and tightened the lock, forcing Barry to tap out at the 3:22 mark.

After showing off his wrestling in his March win over Dan Hardy, welterweight up and comer Anthony Johnson got back to what he does best as he knocked out Charlie Brenneman in the first round. See post-fight interview

“Everyone was talking about my last fight with Dan Hardy, so I figured I had to come out and make a statement,” said Johnson.

Johnson used his kicks to avoid Brenneman’s takedown attempts in the opening minute, and after sprawling out of one attempt, “Rumble” fired off a series of crushing ground strikes – first punches, then knees. Brenneman fought his way out of immediate danger, but as the two began to rise, Johnson kept his foe from getting a bead on where the next shot was coming from. As Brenneman found daylight against the fence, Johnson was already up and loading up the finisher, a crushing left kick to the head that put Brenneman on his back, prompting an immediate stoppage from referee Mario Yamasaki at the 2:49 mark.

There was no abbreviated ending in the rematch between lightweights Matt Wiman and Mac Danzig. Instead, fans got 15 full minutes of action – with the emphasis on action – from the two Ultimate Fighter alums, with Wiman pulling out a close, but unanimous, decision win. See post-fight interview

Scores were 29-28 across the board for Wiman, who scored a controversial first round submission win over Danzig in June of 2010.

Engaging immediately, the two lightweights battled it out at close range until a Danzig kick to the head allowed Wiman to take the bout to the mat. After some back and forth action, Danzig tried to sink in a guillotine choke as the two rose, and when that came up empty, he flurried on his foe. The infighting continued, with Wiman scoring with elbows as Danzig let his fists do the talking. In the final minute, Wiman pressed the action, bloodying Danzig’s nose and getting the fight to the canvas just before the bell.

With the trench warfare continuing in the early part of round two, Danzig decided to change things up by taking the bout to the mat. Wiman wasn’t flustered though, as he searched for a submission from the bottom position. Danzig, cool under pressure, broke free and fired off strikes, but Wiman again looked to grab his opponent’s arm. After escaping again, Danzig got back to his feet, with Wiman right behind him. Then it was back to the toe-to-toe battle at close range, with neither fighter giving an inch.

If fatigue was going to be a factor in the final round, both fighters did their best to hide it, as they continued to scrap with mere inches separating them. Wiman’s elbows appeared to be the harder shots, but Danzig made up for it with volume, and when he got Wiman to the mat, he made his move as he took his opponent’s back. Wiman fought loose and reversed position, delivering hard shots from the top as Danzig tried to find an escape route. With 40 seconds left, he found it, scrambling to his feet. A last second guillotine choke attempt from Danzig came up empty, but it ended the 15 minute war with a deserving flourish.