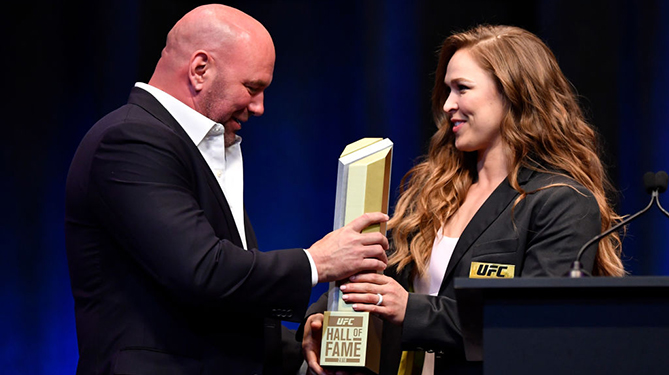 The newest members of the UFC Hall of Fame were formally enshrined into UFC glory on Thursday night of the 7th annual International Fight Week.

Ronda Rousey, Art Davie, Matt Serra, Bruce Connal, Shogun Rua and Dan Henderson were honored for their incredible accomplishments in mixed martial arts in front of a crowd at The Pearl at the Palms Casino Resort in Las Vegas.

Rousey will be inducted as a member of the Modern Wing, as her meteoric rise to fame transformed her into a UFC legend and pop culture sensation. And when she was introduced, the crowd at The Pearl gave the former bantamweight queen rowdy welcome that she deserved.

Her response was simple and heartfelt.

“Because of you I'm the first woman up here accepting this incredible honor,” Rousey said. “May I be the first of many. We changed what it means to fight like a girl.”

She also offered office to everyone in the audience and watching at home. Urging people to prove others wrong every time they are doubted.

Rousey wasn’t the only former champ to earn a jacket Thursday, as Matt Serra was inducted into the UFC Hall of Fame as the 15th member of its Pioneer Wing. His impressive career included being crowned The Ultimate Fighter Season 4 winner and many impressive Octagon performances, none more stunning than his knockout of legend George St-Pierre in 2007.

Being considered a pioneer isn’t something that Serra takes lightly.

“That means I was in the trenches. I was in the vanguard,” Serra said. “It also means that I’m getting old (laughs).”

Proving the doubters wrong since day one. @MattSerraUFC continues today as he enters the #UFCHoF. pic.twitter.com/oi2YTAmbW5
— UFC (@ufc) July 6, 2018

All jokes aside Serra, acknowledged those that helped him achieve greateness and he felt honored be in the company of legends.

“Fighting has always been a big part of my life. I enjoy being the underdog,” Serra said before ending his speech with words of wisdom for the world. "You don't know where your fists will take you!"

Finally making it into the hall in the Contributor Wing is UFC co-founder Art Davie, who’s partnership with legendary Brazilian jiu-jitsu master Rorian Gracie eventually turned into the UFC. It was a moment that was long overdue, but the wait didn’t bother Davie.

“I finally made it. I'm officially a UFC Hall of Famer,” Davie said proudly. “I took the UFC as far as I could. I didn't create the UFC, the UFC created Art Davie.”

On the UFC's 25th anniversary, we honor the man who helped give us our start. #UFCHoF pic.twitter.com/HfYCQXSKoo
— UFC (@ufc) July 6, 2018

Davie thanked the 1,793 fighters who have fought in the Octagon over the last 25 years for all their contributions, as well as the fans.

"All of us together kept the UFC together and made it thrive," Davie said.

The late Bruce Connal also was introduced, after pioneering and producing more than 300 UFC televised events during his 19-year tenure with the promotion. He was inducted by his family, after the audience watched a video in his honor.

In addition, the UFC 139 bout between Dan Henderson and Mauricio ‘Shogun’ Rua is being honored in the Fight wing of the hall. Henderson accepted the award and the brawler inside him couldn’t have been more proud of what took place in the Octagon that November 2011 night.

“I want to give thanks to Shogun for bringing out the warrior in me,” Henderson said. “We had two fights and it was an honor to share the Octagon with him.”