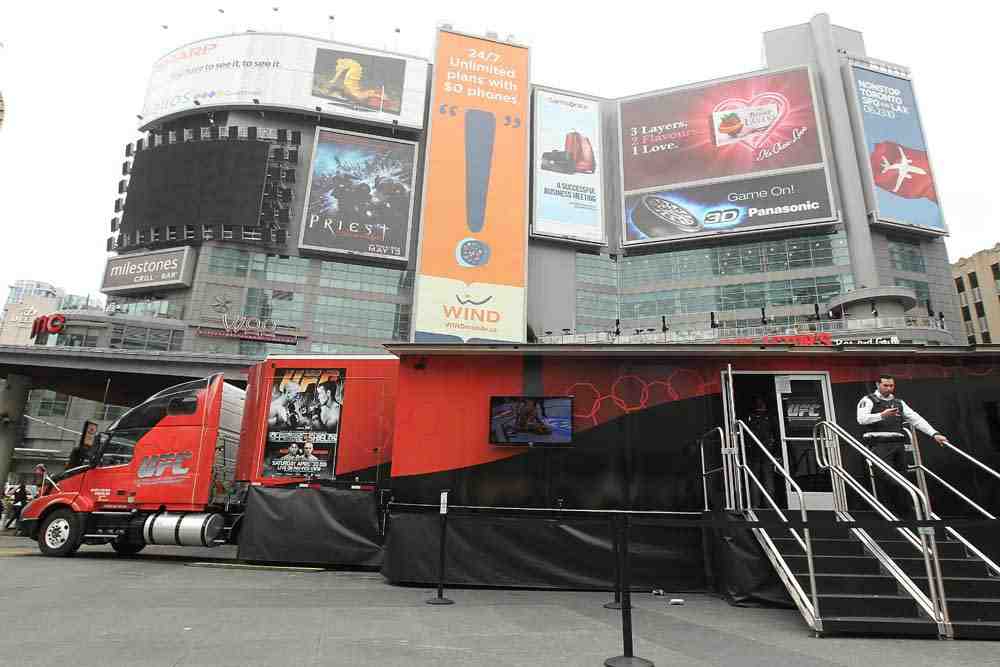 It will also hit major cities such as Las Vegas, Los Angeles, San Francisco, Chicago, New Orleans, Pittsburgh, and Washington, D.C.  The Octagon Nation will make a special stop at Times Square, where special activities and surprise fighters will be making appearances to celebrate UFC’s visit to the intersection of the world.

The tour, which kicked off in April prior to UFC’s first-ever event in Toronto, features autograph signings with top UFC stars, a UFC Xbox station, and a pop-up retail store where fans can purchase the latest UFC merchandise. In addition, fans have the opportunity to visit an exhibition truck dedicated to showcasing rare UFC memorabilia such as Royce Gracie’s autographed Gi and Georges St-Pierre’s fight shorts.

What’s more, UFC® Octagon Nation Tour™ hosts physical fitness tests for fans (weigh-in, high jump, pull-up bar and a punch strength station) where each visitor receives a fight card with their results which can be instantly shared on their Facebook page. Participants achieving top results will be posted to UFC.com/tour following each stop, making UFC® Octagon Nation Tour™ one of the most interactive of its kind.

“I’ve always said that the UFC live experience is the best in all of sports,” UFC President Dana White said. “With the Octagon Nation Tour, we are going to bring the fastest-growing sport in the world to some of the best events of the summer. We’re excited to hit the road and give fans the opportunity to check it out.”

*All dates and stops subject to change*