To celebrate its 25th anniversary as the premier destination for mixed martial arts, the UFC is launching the Tales of UFC #1 comic book exclusively for fans at UFC 232. The story brings to life the original fighter on the UFC logo and is a harrowing tale of action, adventure, and family.

For writer Dave Dwonch, it was a chance to introduce comics to a completely new audience and give diehard UFC fans a brand new hero they can believe in. We talked to Dave to hear about his process, what it was like working with the UFC as part of their 25th anniversary, and how the story of Mike and his daughter Maxine Mercury is one we can all relate to. 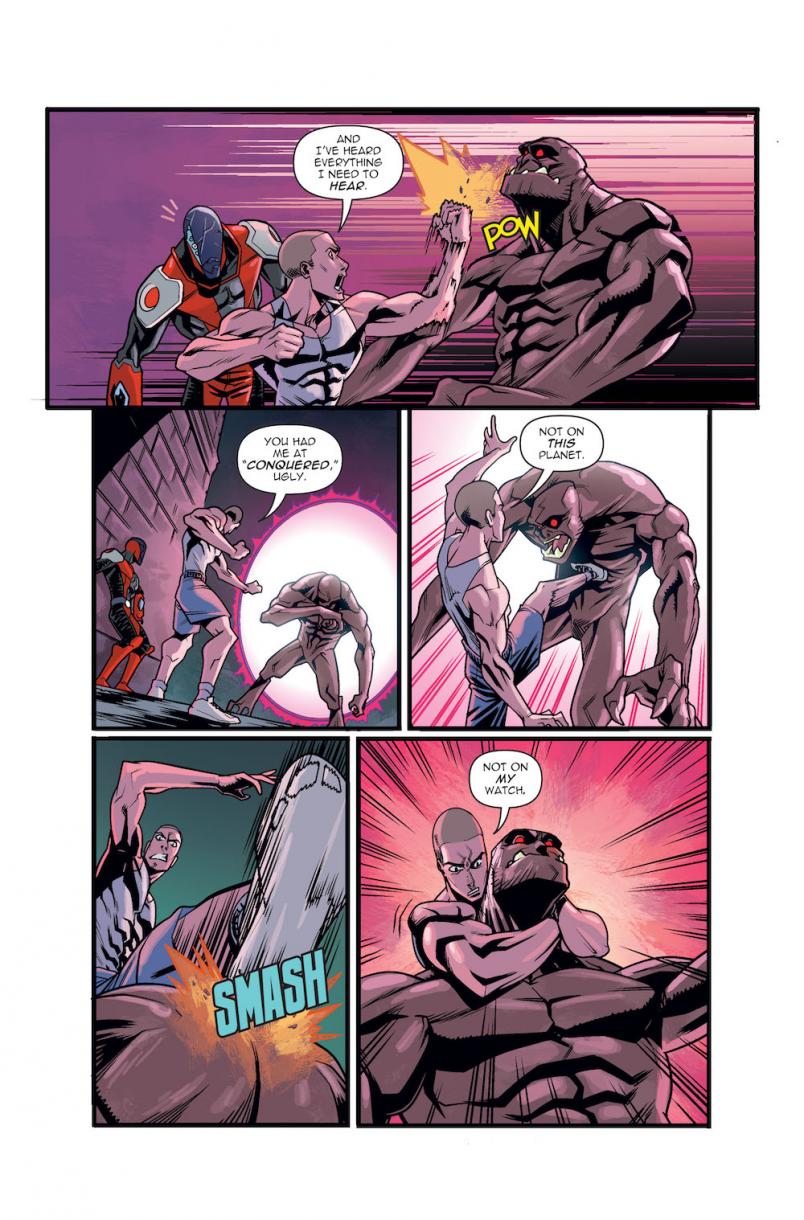 UFC: How did you get connected with UFC for this project?

Dwonch: A good friend of mine has been an agent at WME for a while and we’d always joke about him representing me. So whenever something in the comics space would come up, he knew I’d done previous work with sporting franchises. I came in and pitched 3 separate projects and the one we all grooved on was the Return to the Octagon comic with Mikey Mercury, the original logo character.

UFC: Did much change from the pitch to the final story we have in our hands?

Dwonch: There were a few things changed, but it was still very close to what was pitched. Working with the UFC has been night and day compared to other companies. It was very collaborative and there was a good give-and-take. The book that readers will get is the purest vision of that initial pitch.

UFC: The story is very different from your normal UFC experience. What were some of the benefits and challenges you experienced coming into this project?

Dwonch: With work like this, some of the pros and cons are exactly the same. The owner has a vision for what they want, but they may not understand the [comics] space with which we’re putting it out. It’s kind of like going from a book to a tv show. Visions need to change and compromises need to be made to better fit the comic book format. We’d have moments where a suggestion was made and I’d go, “Oh yeah, that shouldn’t be in there. That doesn’t make any sense.” So having a strong story and all sides being open to collaboration really helped.

UFC: It’s really cool to see those father-daughter family moments between Mike and Maxine, and I think that speaks closely to our fighters who have these strong family stories. How did you balance that emotional thread with all the fighting and sci-fi elements that pop up?

Dwonch: The wheels really hit the road when I can understand what a character’s emotional motivations are. This book has action, adventure, a sci-fi element, but what I brought to the table was the more personal story between a father and a daughter who have an estranged relationship. You don’t see that talked about in many super-hero comics and I think being a hero means being a good parent.

The sci-fi elements really speak to the traditional comic book fan but this story is deeply rooted in MMA as well. Mike might have this super-powered armor, but it’s only good at far range and his enemies are grapplers. The test of any hero is whether they’re going to step up to the challenge. So while he might have stumbled upon this suit, as someone who practices MMA he’s able to rise to the occasion. 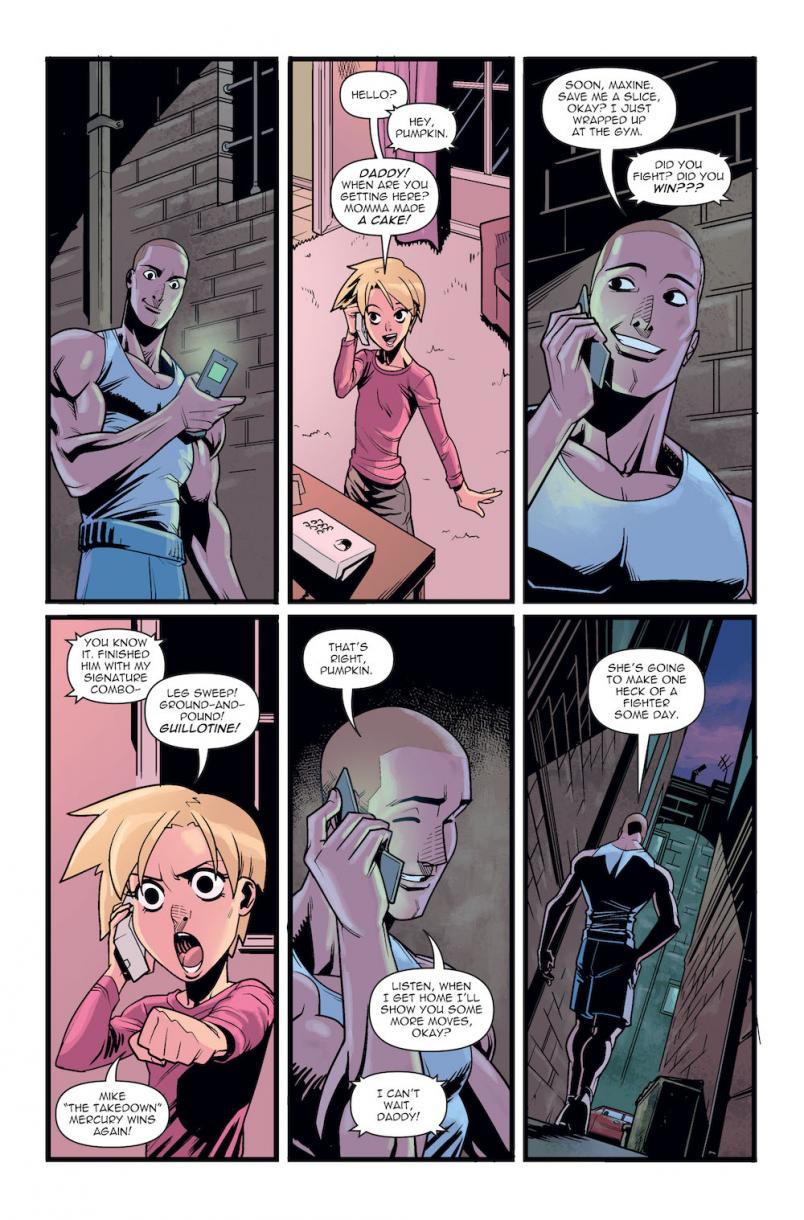 UFC: Tell me about your creative team. You also lettered the issue, correct?

Dwonch: I did. I don’t want to say I’m selfish, but I like to letter my work because gets delivered to you they sometimes interpret the work in a way that influences the dialogue and sometimes you change dialog along the way. You may get a perfect illustrated expression and the dialog was wrong in the script so I get to go in and liven it up a second time.

I’ve known Jason Federhenn for a long, long time and I’ve always wanted to work with him. I knew he was the right artist on the sci-fi side of things but wasn’t too familiar with MMA. Brad Simpson, the colorist, is a huge UFC fan. I haven’t met a bigger UFC fan so having him on the team really helped influence the MMA side of the art. We really got the best of both worlds with the creative team.

UFC: What was your level of fandom for the UFC and how did it influence the work?

Dwonch: I’m a casual fan and I say that unapologetically. What I loved about getting deep into this project was learning more and realizing the fans not only want a UFC comic, but they’re willing to share their passion and knowledge for the sport. It’s a really welcoming environment so I’ve been over the moon. Even my wife is a pretty big UFC fan so it first started at home getting caught up then leveraging people like Brad and other fans at comic shows to learn more. It’s been really rewarding. 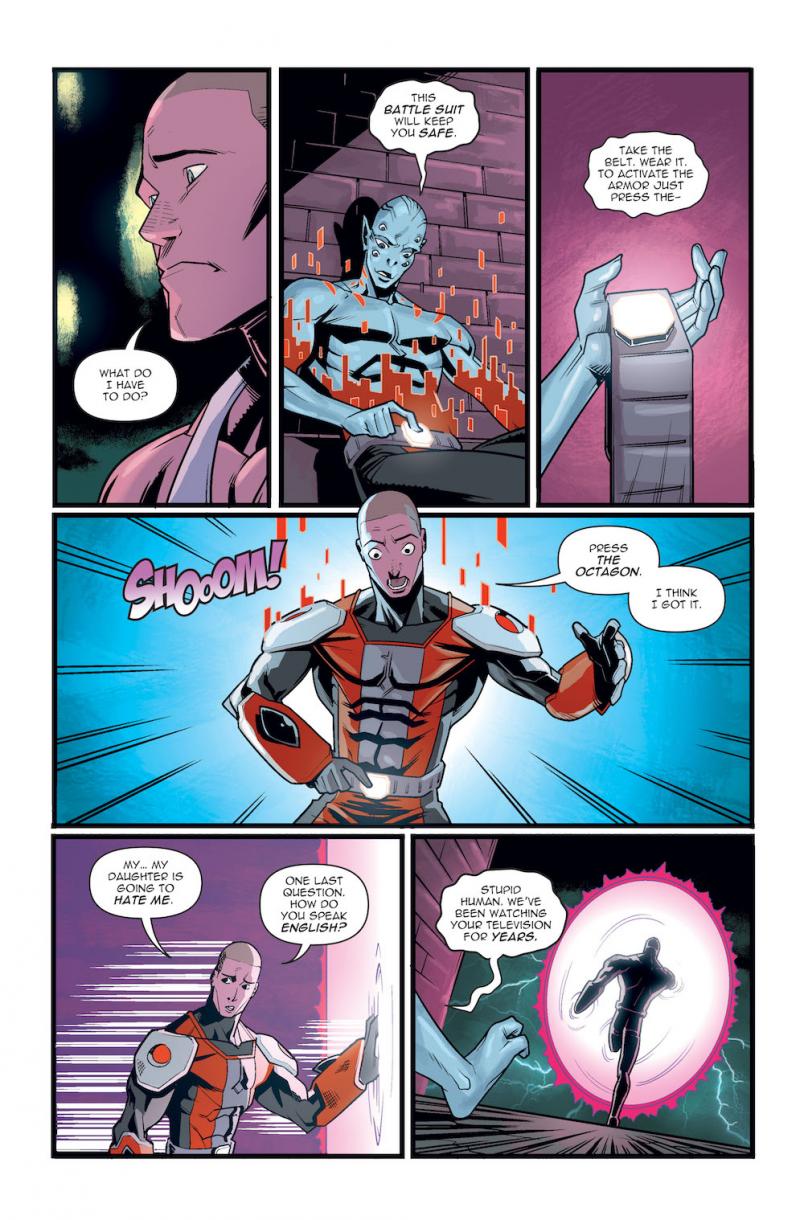 UFC: Is it exciting to launch a new #1 comic at UFC 232 directly to fans? It’s a different approach compared to how other comic books launch.

Dwonch: I like to say I’m pleasantly terrified. Going directly to the source with the UFC fans is absolutely the way to go. I really hope they enjoy it and if it’s someone’s first comic I can’t wait to hear what they think of it. It’s really gratifying to be part of the UFC’s 25th anniversary celebration at UFC 232. It's time for UFC fans to get their own comic book series.